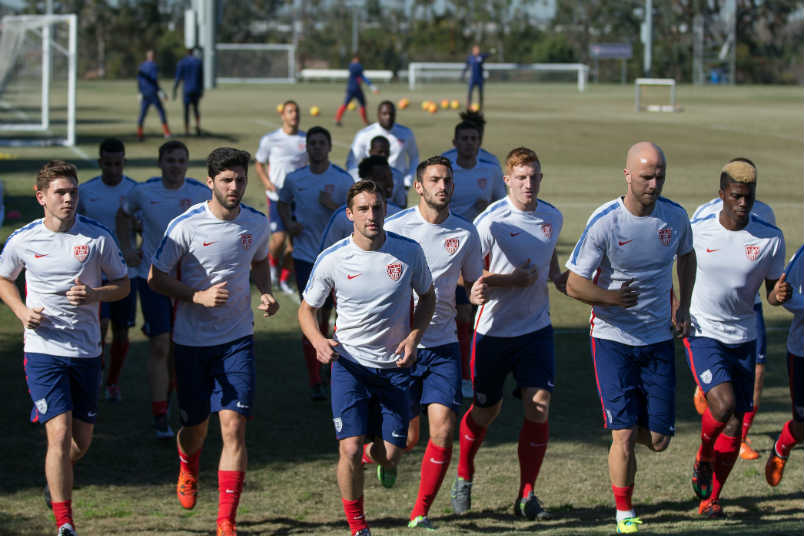 By Charles Boehm – WASHINGTON DC (Jan 6, 2017) US Soccer Players – Bruce Arena will launch his second go-round in charge of the USMNT with a large, all-MLS squad for the annual January camp. Thursday’s announcement of the oversized roster that will gather in Southern California starting next week served up plenty of conversation fodder.

Here are a few topics to ponder as the domestic Yanks old and new begin 2017.

A dose of hope

All over the world, a change of national team coach usually means a fresh chance. There’s always an overlooked segment of the player pool. New beginnings allow for turning old pages. That’s the case here as well.

Jurgen Klinsmann gave the likes of Benny Feilhaber, Darlington Nagbe, and Wil Trapp a look. Sooner or later, he decided he didn’t like everything he saw. Meanwhile Dax McCarty, Matt Hedges, Walker Zimmerman, and Chad Marshall got little to no chance under the previous regime. All can stride into January camp with just as much hope of leaving their mark as anyone else in the squad.

The same goes even for someone like Kellyn Acosta. He impressed Klinsmann, but was usually played out of his preferred position. Or Bill Hamid. He got call-ups, but fell short of serious consideration for the games that mattered.

The converse of all this is also true, too. Those who earned the trust of the technical staff over the past five years cannot assume anything. That should add a tasty edge to the training sessions at StubHub Center in Carson, California. With those practices now open to the media, we may get a much more transparent look at how the process unfolds.

Who will grab the mic in the fullback auditions?

Arena has made no secret of his concerns about the back line’s recent performances. He’s emphasized that he believes some organization and direction will go a long way. He’s also made clear his interest in new blood, especially out wide

Witness the raft of unexpected and intriguing names he called into camp. Youngish newcomers Keegan Rosenberry and Taylor Kemp. Veteran utility man Brad Evans. 34-year-old free agent DaMarcus Beasley. Even midfielder Graham Zusi. will get a run out in the back after his Sporting KC coach Peter Vermes tried him at right back last year.

Amusingly, this experimental outlook echoes Klinsmann’s approach to the corner spots. It’s far too soon to say what Arena will do at that spot when World Cup qualifying resumes in March, though. Could Fabian Johnson move into a more advanced role when he returns? Will the fullbacks get forward more under Arena, or less? Kemp, for example, has a wicked left foot. He’s generally been better for DC United on the overlap than as a pure defender.

Arena doesn’t seem to enjoy with complex discussions of tactics and formations. A “keep it simple, stupid” type, he has routinely downplayed his own tactical influence on teams and matches. His LA Galaxy teams generally did their best work in a straightforward 4-4-2.

He’s also not fooling anybody who remembers his last stint with the USMNT. In the 2002 World Cup, he shifted formations and tactics on the fly. The group he’s assembling this month offers balance and adaptability in every area of the field. He’s got playmakers, ballwinners, flying wingers, and box-to-box types. They’re Swiss Army knives who can pinch, float, or roam.

nsmann rarely hesitated to mix and match in situations like. Arena will likely do the same in the upcoming friendlies against Serbia and Jamaica.

A preliminary glance at his roster suggests that he could emphasize possession, pack the midfield, sit deep, throw numbers forward, or any combination of those within the same 90 minutes. The presence of creative types like Feilhaber, Nagbe, Sacha Kljestan, Juan Agudelo, and even Trapp, a deep-lying midfielder with a cultured eye for distribution, will have many hoping for an open throttle, however.

Has Arena put the dual national issue to rest?

The new (old) boss did himself no favors with some clumsy word choices when talking about dual nationals in the past. He subsequently tried to mend fences. In that regard, he can point to his own track record of balanced rosters at both club and international level.

That said, actions speak louder than words. Even in picking an entirely MLS-based squad for this month, Arena tabbed some global flavor. The roster has several overseas-born players on it. Two of them, goalkeeper Stefan Frei and winger Kekuta Manneh, haven’t even completed their eligibility process quite yet. They’re unlikely to play in either of this camp’s friendlies.

That last part is particularly striking. US Soccer has generally been quite conservative in its approach to such matters. By calling in those two at this stage, Arena has underlined the degree of his interest in them. He’s also sending a message to others in similar situations. If you’ve got something to offer his team, he’ll take a look, even if it’s only in training. That’s a lot more open-minded than many of us give him credit for.