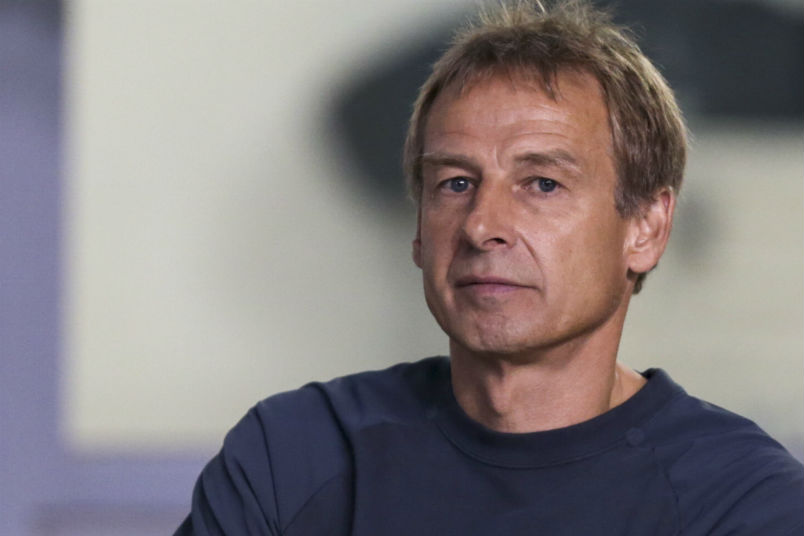 By Charles Boehm – LOS ANGELES, CA (Jan 19, 2017) US Soccer Players – For many attendees at the 2017 NSCAA Convention, it was one of the most eagerly-anticipated sessions on the sprawling event’s packed schedule… and that’s saying something.

Jurgen Klinsmann visited the Los Angeles Convention Center last weekend for an NSCAA spotlight session with his longtime attaché Allen Hopkins. It was his first public appearance since losing his job as USMNT head coach. His hour-long chat in a packed auditorium was an absorbing experience. It was a reminder of the lows and highs of his tenure as National Team coach.

“Life’s been good,” Klinsmann said with a small smile. “After being let go at the end of November, another chapter starts. You have time to reflect on everything that happened, what you did. First and foremost I am very thankful. I always felt very privileged to have our national team over the last five, five and a half years, with all the ups and downs, and to represent all of you guys in the soccer community. I learned a lot. So it’s been an amazing run. It’s been a lot of fun, too.”

Klinsmann made clear that he plans to work again at some point. He gave no hints as to where, despite reports linking him to China’s cash-flush league. He did show signs of frustration with the way his last job ended. He seems to have attributed his fate to his last two games in charge, rather than a wider trend of poor results.

“I think in the world of soccer you’re measured on results,” he said. “After a successful 2016 in [which] we reached the semifinals of the Copa America, at the end of the year two lost games – obviously two very important ones – at the beginning of the Hex, and then your federation decides to let you go. So when you have these moments of failure, I think it’s really important to see, where does this decision lead towards? But this answer now I won’t get, because it’s now Bruce [Arena]’s job to get the job done.

“And then you’ve got to live also with consequences – when the benchmark was ‘you cannot lose to Costa Rica and Mexico,’ then that’s the benchmark.”

That version of history is certainly up for debate. He left it to others to decide if he was ultimately a success or failure.

“We achieved a lot within in the system of US soccer, whether with the US national team, whether in coaches education, or connecting a lot of dots – not all the dots, because there are so many still out there that are disconnected, which we all know,” he said. “I hope that a lot of the young players that we have in that pool that are not actually in the senior team yet, I hope they’re coming through, because we built a scouting system not only in Mexico but all over Europe, we have social workers out there looking at the kids from the age of 17, 18, 19. That all hopefully comes through – it might take another five years, I don’t know.”

The implementation of his philosophies can be another matter altogether. Klinsmann has always been at his best when discussing big-picture ideas, and so it remains.

“I never liked the words ‘recreational’ and ‘competitive,’” he said when asked about the value of failure for young players and coaches. “The first time I ever heard it was here [in the United States]. It doesn’t exist anywhere else in the world. It’s sports – sports is competition. If you’re going to play inner-city basketball, you only stay on the court if you win. It’s about to compete, and with the respect that it means. Kids out there, they have to figure out ways to win…. I don’t think they need medals every day. But then make it competitive, that’s what we enjoy.”

Asked whether he would’ve reached his heights of world stardom had he grown up in the US, Klinsmann pointed to soccer’s nagging cultural identity crisis.

“The DNA of sports here is basketball, football, baseball, hockey. For our sport it is difficult,” he said. “Now the best talents in the world, the ones that we love so much, the Neymars and the Messis and the Ronaldos, where did they grow up? Basically they are inner-city basketball kids. That’s who they are in their countries. And I was an inner-city basketball kid, probably, in soccer terms, in my country. So there’s still a lot, a lot of opportunity out there for the game of soccer to grow – because we’ve got to take it to where the kids are.

“Would I have made it to that level growing up here? I doubt it. Maybe I would’ve played baseball, I don’t know. I’m bad at baseball.”

As so many of us learned during his topsy-turvy USMNT tenure, Klinsmann doesn’t seem to distinguish between the voice required of a compelling television commentator and that of a national team coach. His anecdote about last summer’s 4-0 Copa America Centenario semifinal loss to Argentina had most of the audience roaring with laughter. Then again, some USMNT fans might not find it all so funny.

“After we lost 4-0 to Argentina, I was asked, ‘how can you lose 4-0?’ I had to laugh. I said to the gentleman, ‘I take responsibility, but they could’ve given us eight,’” recalled Klinsmann with a chuckle. “They are another couple of levels up there… when they gave us the fourth goal in that game against Argentina, I looked at [Lionel] Messi and I made this sign – ‘please slow it down”… for me it should be a very bad day, and obviously the result was a bad day.”

Klinsmann comes across as someone you’d love to share a beer with at a game. Whether he’s equally capable of providing a high-level team with advanced tactical instruction is less certain. At their weakest moments, his US teams could look rudderless. At the NSCAA, there were hints as to why.

“For me, when I came here I was a little bit overwhelmed with the kids all the time looking at us coaches – they want an answer from us to everything that happens out there. For me overwhelmingly was always the fact saying to the player: ‘You solve it. You are the player. You’ve got to figure it out.’ as coaches we put you in a safe environment, hopefully in a fun environment, hopefully the chemistry of the group that we gather is a good group of kids and players. But then it’s a player’s game.

Klinsmann is comfortable in the spotlight and adept at connecting with his audience. On this occasion, he got a standing ovation as he left the stage. It’s unlikely to be the last we see of him in the public eye. His hefty USSF contract gives him the freedom and flexibility to pick his next move carefully. We’ll be talking about the legacy he left for the USMNT program for years and years to come.

“We all need to be aware that we are just all part of a certain timeline and somebody else takes over and takes it to the next level in his own way, in his own personal way,” he noted. “But a lot has been done the last five years which I am very proud of.”