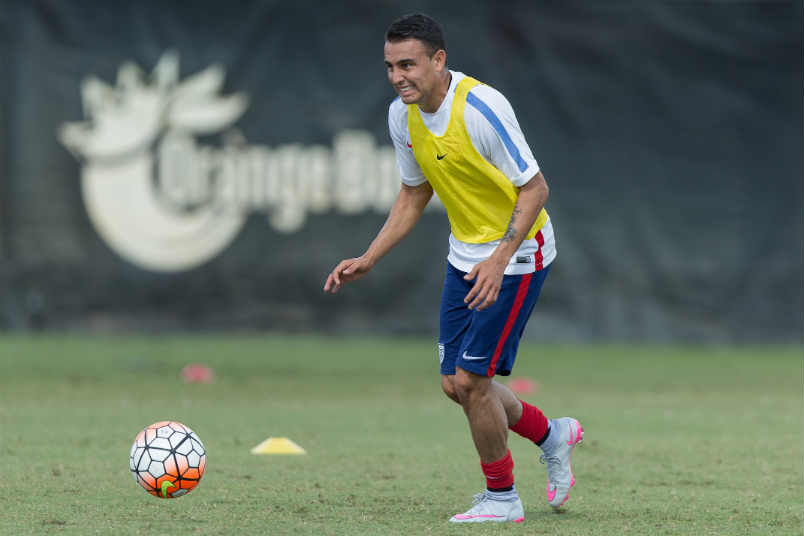 By Jason Davis – WASHINGTON, DC (Jan 6, 2016) US Soccer Players – Call it a homecoming, or getting the band back together. Or, go with the club’s version. A reuniting of “Superman” and “Batman.” Whatever the label, Minnesota United signing Miguel Ibarra and Christian Ramirez is a pretty big deal.

The club announcing their signings together is no coincidence. Both are Minnesota United alums from the team’s NASL days. Ramirez is making the move directly from the NASL version of United to MLS. Ibarra returns to the Twin Cities after a brief sojourn to Mexico. Bringing back Ramirez and Ibarra is yet another sign that Minnesota United, MLS version, will hew closely to the philosophies that made Minnesota United, NASL version, successful. Turning Ramirez and Ibarra into stars is one of the club’s greatest claims to fame. That should appeal to the local fan base.

Ibarra’s rise to stardom did more than take him to Mexico. He also caught the attention of USMNT coach Jurgen Klinsmann. Getting a call-up as a lower division player is a rarity for a reason.

Back in the post-World Cup period of 2014, Ibarra earned a chance with the national team thanks to a blistering start to the NASL campaign with United. Ibarra is an attacking player most dangerous when slashing in from the wing. He turned heads across American soccer with his goalscoring and ability to set up teammates like Christian Ramirez. Ibarra was a large reason United topped the league in total points across the Spring and Fall seasons. He then carried that form into 2015, continuing to earn USMNT call-ups.

The USMNT appearances ultimately landed Ibarra a chance to move to Mexico and Club Leon in the summer of 2015. United cashed in on a hot commodity. Ibarra got a chance to prove himself at a higher level of competition.

Ibarra returns to Minnesota with just one league goal in Mexico. That’s a disappointment, but it probably didn’t cause a lot of doubts back in Minnesota. The team knows what he can do. If Ibarra can find the same sort of relationship with Ramirez that he had before departing for Liga MX, Minnesota United will be a difficult team to defend.

Because of the nature of MLS expansion, the process of signing one of the club’s biggest names from their NASL days was not a simple one. United had to orchestrate a trade with Portland involving goalkeeper Jeff Attinella, picked up in the expansion draft, to secure Ibarra’s rights. While they hardly went crazy in a bid to bring Ibarra back to Minnesota, it wasn’t easy. The club put in the work in part to send a clear message. This is a continuation of what they did a league down.

Ramirez brings more of the goalscoring punch as he makes the leap from the second division. The “Superman” of the pair is a natural finisher. He can score from outside of the box but is more comfortable doggedly pursuing space inside of it. Ramirez won the NASL’s Golden Boot in 2014 with 20 goals. He was a Best XI pick for 2014 and 2015. In light of Ibarra’s call-up by the USMNT, a wave of support for Ramirez to get a look began. Should he find the same sort of success in the top division as he did in three years in the NASL, those calls will only grow louder.

Ramirez and Ibarra are not flashy signings in the vein of Atlanta United’s South American attackers. They’re not at the level of any of a number of big name Designated Players linked to clubs around MLS. Neither of them will sell tickets on their own to new fans. Their resumes are about what they did in the second division of American soccer at a time when that division was uneven at best.

Those second division resumes do have a few things going for them. They prove that both players have talent. In the right setup and surrounded by the right group of teammates, they are capable of thriving. Perhaps more importantly, they made their names in Minnesota.

That certainly matters to the fans who dubbed Ramirez “Superman” and Ibarra “Batman” while the two were lighting up the NASL between 2014 and 2015. Thi is about the club Minnesota United wants to be and how they want to make it happen.