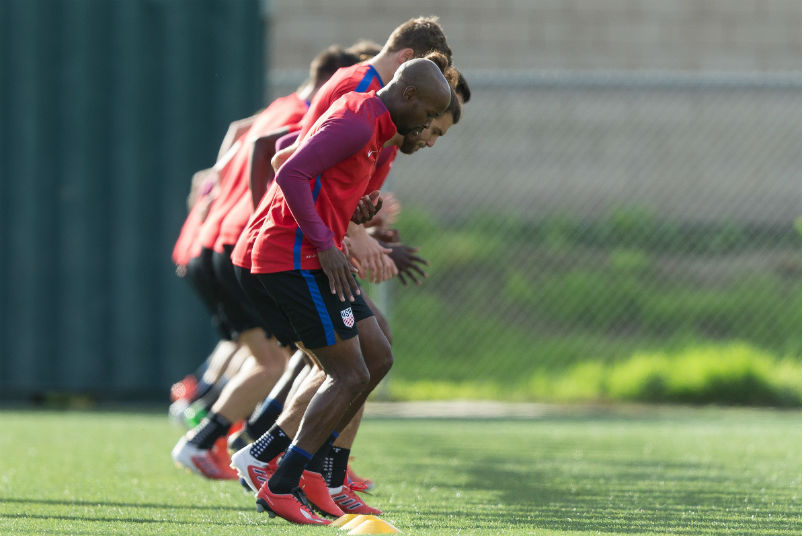 By Charles Boehm – CARSON, CA (Jan 12, 2017) US Soccer Players – For several players, opening day of January camp meant a long awaited return. It was the first time they’d worn the US colors in years. Some, like Matt Hedges and Walker Zimmerman, never lost belief that they would eventually get the call to represent their country. That wait coincided with career seasons in MLS play.

“I thought 2016 was a very good year both for FC Dallas and for myself personally,” Zimmerman told USSoccerPlayers.com. “And so I hoped that it would come, knowing that January is typically a time where some new players get their chance. So it’s something I was looking forward to, hoping for, and glad it came.”

Benny Feilhaber, however, had no such faith.

Despite years of distinguished international duty up to and including the 2010 World Cup, Sporting Kansas City’s midfield schemer was consistently left out of former US coach Jurgen Klinsmann’s plans. Almost exactly a year ago, he seemingly enshrined his own exile when he let loose at a media roundtable with a head-turning “rant,” in his own words, about the USMNT coach and his decisions to ignore him, Hedges, Sacha Kljestan and several other US-eligible players.

It was no great surprise, then, to see Feilhaber wearing one of the biggest grins at StubHub Center as Bruce Arena’s second stint in charge of the USMNT opened on Wednesday.

“It didn’t feel like I would be back,” admitted the Brazilian-born playmaker. “I had kind of turned that page a little bit in my career and tried to focus on the things that I could – obviously putting together good MLS seasons. I always watch the national team, it’s always something that I look very fondly back on, when I did have my opportunities with the national team with Bob [Bradley]. But I had kind of closed that book. And to have it re-opened again unexpectedly was an amazing feeling.”

The FC Dallas center-back duo of Hedges and Zimmerman have provided their club with a stable foundation for several years of success, most notably last year’s US Open Cup and Supporters’ Shield double. Neither heard much from Klinsmann during his time in charge, making Arena’s call for both that much sweeter.

“I sent Matty a text as soon as we found out and was just like ‘hey, let’s go do this thing together and try to lock down some spots and earn our way,’” Zimmerman said. “So we’re happy for each other. It’s fun being teammates and being here, having played next to him this past season. So excited for him, excited for myself and looking forward to it.

“There’s still a lot of steps to go. You always dream of the World Cup, the biggest of stages – and so this is just the first stepping stone with the men’s national team, and hopefully there’s many more to come.”

MLS’ 2016 Defender of the Year, Hedges admits that he’d harbored some frustration at not getting a call up to this point. However, he sees this month’s camp not as a breakthrough, but an invitation to more hard work – a chance, and perhaps a fleeting one.

“Everybody’s excited – a lot of new faces. It’s just a good opportunity to come out here and try to represent your country, and fight for a spot,” said Hedges.

“It’s probably a new beginning for a lot of us guys, maybe they’ll get a new look or a new chance [under a new coach]. But a change is a change. It happens all the time in sports – you just try to take your opportunities when they come.”

Feilhaber, who turns 32 later this month, is not just back in the mix. He’s part of a select group that Arena has identified as capable of making an immediate impact on a squad in need of creativity.

“He’s a little different than most players,” said Arena of Feilhaber. “He’s a good passer, he’s a creative player. He and Sacha Kljestan, I think, are a little bit different than some of the midfielders we’ve traditionally had in this pool, so I think they’ll get a good hard look in this camp.

“I still think he’s a player that deserves consideration here.”

Arena makes clear that many of this month’s newish faces are unlikely to be thrust straight into the fire of a World Cup qualifying campaign in dire need of immediate results when it resumes vs. Hondura and Panama in March. But Sporting’s star is a prominent exception, and he knows it.

“It’s something that I wasn’t sure would ever happen again, so it feels like a second chance and because of that, it’s very motivating,” said Feilhaber. “So I’m very excited to be back and I want to make my stamp in this camp.”