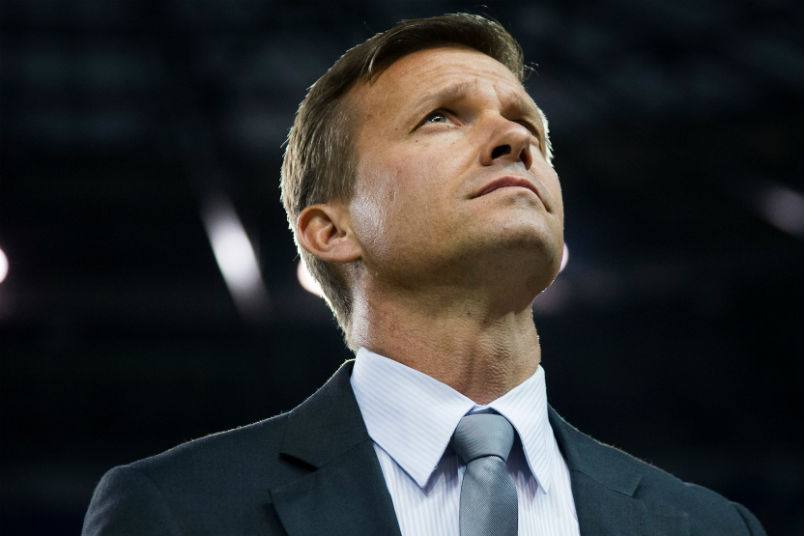 By Jason Davis – WASHINGTON, DC (Jan 13, 2016) US Soccer Players – Sometime on Wednesday evening, the word was out. New York Red Bulls head coach Jesse Marsch was on his way to take over as the manager of Red Bull Salzburg of the Austrian Bundesliga. Chris Armas would take the reins of the MLS club while Marsch stepped into the world of European football.

While Austrian soccer is not among the more elite environments on the Continent, it would represent a step up for Marsch. What American soccer coach wouldn’t want a chance to get his foot in the door in Europe?

Though unconfirmed, the story, first reported by Sam Steskal of MLSSoccer.com, seemed to have legs. Marsch was conspicuously absent from the MLS SuperDraft combine. Red Bulls technical director Ali Curtis suddenly canceled a planned seminar on the “Red Bull Way” slated for the NSCAA convention in Los Angeles.

By Thursday, something had changed. For whatever reason, Marsch’s rumored move abroad fell through. The club announced he would be heading to LA to take part in the draft and accompanying shenanigans.

“Jesse Marsch will be traveling to Los Angeles today to join the staff and prepare for MLS SuperDraft,” a tweeted statement from the Red Bulls read. “Jesse will remain at the helm in 2017 to lead the charged towards the ultimate goal of bringing MLS Cup to Red Bull Arena.”

Red Bulls give you wings. And then takes them away, apparently.

In the aftermath, people in the know backed the Marsch to Salzburg story. The idea of an American MLS head coach getting a move to Europe via these specific relationships is interesting. Marsch wasn’t discussed as a possible hire for just any club. Instead, it was a move within the same corporate umbrella. That made the opportunity unique.

The idea isn’t necessarily new, though it has never been as clearly laid out as in the Marsch flirtation with Austria. Back in 2014, Jason Kreis took the NYCFC job, a team owned by the same group as Manchester City. No one gave much thought to the idea that Kreis might be able to go from coaching an MLS team in New York to coaching a Premier League team in Manchester. Still, at the very least it seemed possible. Kreis might parlay any success he had at NYCFC into a bigger opportunity through the City Football Group network.

Kreis didn’t last the season. It’s now Patrick Vieira who could benefit from the connections between NYCFC and Manchester City. Though he’s not an American, it would be interesting to see how Vieira’s time in MLS will factor if he were to move to City via the CFG pipeline.

Red Bull and NYCFC may be the most obvious examples, but they aren’t the only MLS teams who are part of the globalization of sports in the modern day. The ties are less official, but shared ownership between European clubs and MLS teams (DC United with Swansea/Inter Milan, Colorado with Arsenal, etc) at least leaves open the possibility that coaches could move through those channels. The size and prestige of some of the clubs involved probably precludes any Americans going from the Rapids to Arsenal, to name an example. That doesn’t mean that multiple club ownership won’t play a role in aiding a move in the future.

When clubs fall under the same organizational umbrella, it naturally breaks down some of the barriers that prevent movement of a coach from the American league to one overseas. The organization already has knowledge of the coach’s skill set. Switching him from one club in the portfolio to another eliminates cost.

It doesn’t look like Marsch is heading to Austria. There’s little reason to doubt that the move was at least seriously discussed internally by Red Bull. That result no doubt comes as a great relief to New York Red Bulls fans. At some point, we’re going to see a promotion within these global soccer companies. A coach will go from one outpost to another. If Americans can’t find their way to Europe through the traditional, simple meritocracy, it’s quite possible they could find their way via the organizational structures of the modern business of soccer.