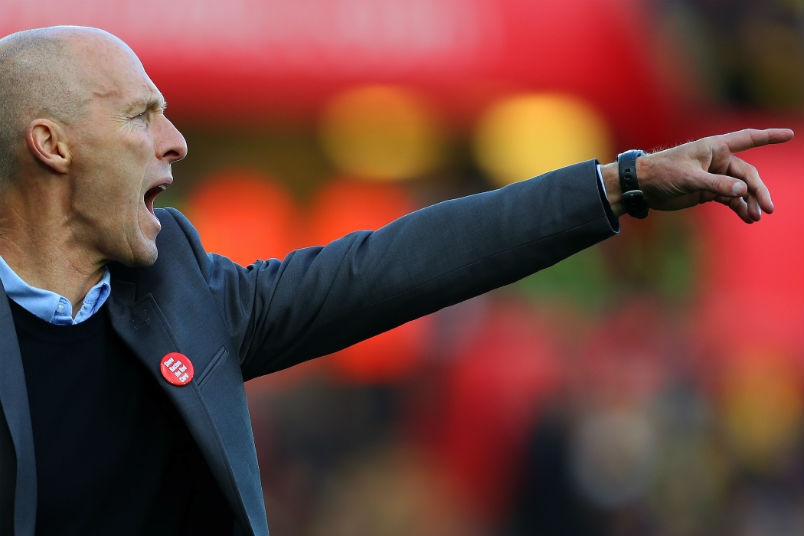 By Jason Davis – WASHINGTON, DC (Feb 3, 2017) US Soccer Players – On the surface, Jurgen Klinsmann and Bob Bradley might not seem as though they have much in common. One is a world renowned former player who parlayed that success into a high profile coaching career. The other is uniquely American. A coach who never played the game at a high level but worked his way from the college game to the top of the professional soccer scene.

The two men even approach the game in decidedly different ways. Bradley’s hallmark is his commitment to research and preparation. He considers it part of the job to pay attention to every detail that might affect his team’s ability to win. Klinsmann works with a much more laissez-faire approach, sometimes going as far as letting his players work out the tactics of a match on the fly. Where Bradley is careful to deploy his players in position they’re accustomed to, Klinsmann likes to push players to respond by putting them in new and unfamiliar roles.

Despite their differences, the two coaches do have something in common. It’s not just that they are both former USMNT head coaches and currently out of a job, though that coincidence sets the stage for something interesting down the line.

Both Klinsmann and Bradley serve as personifications of different parts of American soccer’s ideas on soccer coaches. They represent divergent thinking on what American soccer needs to move to the next level.

Boiled down to their simplest descriptions, Klinsmann is a foreign coach from a traditional soccer power with a stellar playing resume. Bradley is an American coach with no playing resume at all and a history of stops at less high-profile locales. Those identities play into how American fans view them and any success they have while in charge of a team.

Over the last two decades, the idea of a transformative foreign soccer mind playing a larger role in the direction of our national team program has enraptured healthy segment of the American soccer fan base. Those American soccer fans who believed that many of our problems stem from a lack of sophistication never wavered in their certainty that the USMNT needed a foreign boss, preferably one that had coached world-renowned teams. Klinsmann fit that bill.

Even now, with Klinsmann dismissed from the national team after five mostly unremarkable years, his pedigree protects him from overt blame from many. For others, his seeming inability to push the USMNT forward – and the historic losses he suffered while directing the team – was equal parts Klinsmann’s failings and a supposed lack of talent in the US pool.

A rampant streak of inferiority runs through American soccer. The prevailing view of American coaches versus foreign ones is a product of that inferiority complex. Klinsmann has earned plenty of scorn for his record, and for putting the 2018 qualifying campaign on shaky footing. However, the room full of American coaches eager to hear him speak at the recent NSCAA convention in Los Angeles speaks to his continued ability to command the attention of a waiting community.

While certainly at fault in some measure for the results, Bradley’s recent experience with Swansea seemed about more than performance. The American coach doesn’t seem to be getting the same sort of benefit of the doubt that foreign managers might, even from the American soccer audience. Yet Bradley also represented the hope that American coaches could achieve on a high level in Europe, thereby proving the quality of coaching here. A sense that Americans were getting a fair look from teams in Europe contributed to the idea that Bradley deserved a shot at Swansea even if his recent coaching history didn’t necessarily speak to his readiness for the Premier League.

Bradley at Swansea was the culmination of an era of American soccer coaching development that started before MLS’s arrival and didn’t turn out former professional players as coaches. In the very near future America’s top coaches will likely have played in MLS or as pros abroad. For now, however, the most respected names in the American coaching fraternity earned their status without the benefit of an playing pedigree.

That only holds to a certain extent based simply on results with the USMNT. When compared side-by-side, there’s little difference between the records of Klinsmann and Bradley with the National Team. Both qualified first in CONCACAF. Both escaped a World Cup group only to go out in the first knockout round. Both won one Gold Cup while falling short in the quest for another.

Foreign or domestic, the difference between the two coaches is negligible when it comes to the USMNT. That doesn’t mean they’ll stop serving as easy vessels for the hopes and anxieties of American soccer fans.

Bradley is still chasing the European dream as of this moment. Klinsmann could land abroad, though rumors are swirling that some club in MLS might hire him. Both have become placeholders for fans. Their next stops will reflect how American soccer feels about itself.