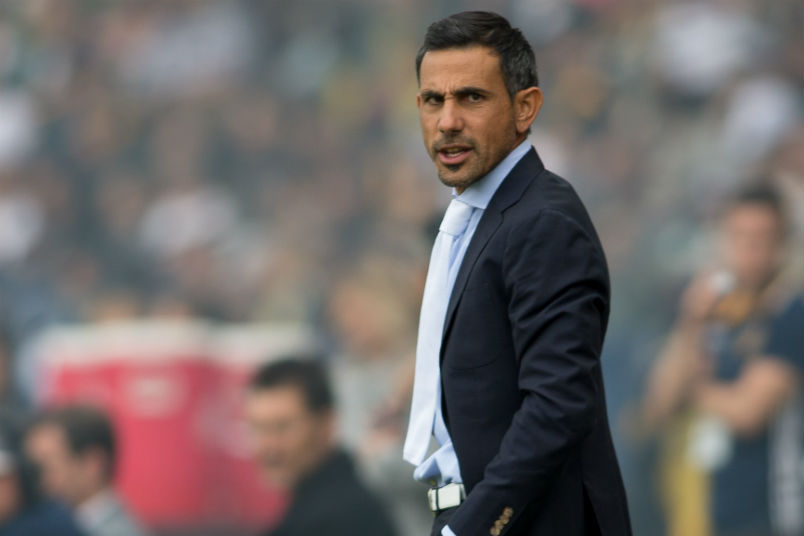 By Jason Davis – WASHINGTON, DC (Feb 24, 2017) US Soccer Players – In 2015, the Colorado Rapids finished last in the Western Conference. They won just 9 games and missed the playoffs. The 37 points they earned across 34 matches tied them for 18th-place in a 20-team league. Their head coach, club legend Pablo Mastroeni, suffered through his first year as a coach, forced into the role when Oscar Pareja suddenly departed for Dallas. What talent the club did have on its roster was either too young, too old, or simply not good enough.

The Rapids, somewhat ironically due to the name they’ve used since starting as an original MLS franchise in 1996, looked like a club standing still in a league that was quickly passing them by. Kroenke Sports, the club’s owners, did not look like a group interested in trying to keep up in the designated player era. Without a clear alternative identity – ala FC Dallas’s commitment to youth emerging from its academy – there was no clear idea on how the Rapids would be able to compete, much less contend for the title.

Then 2017 happened. Seemingly out of nowhere, the Rapids started playing winning soccer. It wasn’t sexy. In fact, it was sometimes barely more the regressive. But it worked. The club took on an identity that seemed pure Mastroeni with its focus of defending first and scoring in opportunistic way. The ’16 Rapids rode it all the way to a 2nd-place finish in what is generally viewed as the tougher MLS conference.

To say the least, the Rapids caught people by surprise last season. They proved that spending money on dynamic attacking players isn’t absolutely necessary, even in the modern MLS. Now, as the 2017 season dawns, Colorado is hoping to prove that they were a one-season wonder and that their particular style of play can work when it’s not longer a surprise.

The question that looms as the new season approaches is whether another MLS team can replicate what the Rapids did last year. The approach is likely to be different, but there are no shortage of candidates for the big turnaround executed by Colorado.

In order to qualify for the status of “surprise” a la the 2016 Colorado Rapids, it’s probably not enough just to have missed out on the playoffs in 2016. While worst-to-first (or close to first) probably isn’t necessary, it wouldn’t surprise anybody to see the Timbers, Revolution, or even Crew SC back in the playoffs and in possession of a high seed.

Those narrow qualifications leave us with a solid trio of teams that don’t carry many expectations into the new year. Finishing 2nd would be a surprise.

The easy place to start? The Chicago Fire. Head coach Veljko Paunovic enters his second season in charge of the club, a clear parallel to Mastroeni, who found his stride in his second year as an MLS manager. Paunovic even showed an inclination to play like the Rapids in 2016, with a numbers-behind-the-ball approach. If Paunovic stays committed to defense, it could set the stage for a Rapids-like improvement for the Fire. The additions of Dax McCarty and Juninho give the club a pair of true leaders and top notch passers in the midfield. While neither is dynamic going forward, that platform should help the Fire improve dramatically.

Houston finished bottom of the Western Conference in 2016, in large part because of a leaky defense and instability on the sideline. Scottish coach Owen Coyle ended his American adventure midway through the season, leaving former Dynamo player Wade Barrett to navigate the ship through the rest of the season. Barrett did yeoman’s work in a tough situation, but the club ultimately decided to bring Colombian Wilmer Cabrera along to take over this season.

Houston added several pieces to its backline in the offseason, including two former Galaxy players. AJ DeLaGarza and Leonardo will try to make the Dynamo more stout defensively. A host of new signings are to carry the load on the attacking end. Cabrera’s team screams “project”. With so many uncertain elements in play, that presents the possibility that Houston could be the league’s surprise package. It would take all of those pieces coming together and the Dynamo play efficient soccer. Maybe Erick Torres will finally return to his Chivas USA form and added an extra element of surprise to the mix.

Finally, we have the San Jose Earthquakes. Once upon a time, the Quakes were a scoring juggernaut who used the big foreheads of Alan Gordon and Steven Lenhart to complement the sneaky brilliance of Chris Wondolowski in front of net. That was 2012. Since then, San Jose has been little more than an also-ran in the tough Western Conference.

With Dominic Kinnear entering his second season since taking charge, there’s at least some sense that the Earthquakes might turn a corner soon. Kinnear’s brand of soccer, to continue the running theme, has never been particularly sexy. It has regularly made his teams competitive. The Quakes still have Wondolowski, who even at 34 is one of the league’s best poachers.

San Jose added a #9 (Danny Hoesen), brought in a couple of youngsters to a group that already included Tommy Thompson, and bolstered the backline. That’s all pretty standard stuff from an MLS offseason roster-rebuild perspective. These are now the choices of Kinnear and new GM Jesse Fioranelli. If everything goes right, the Quakes could sneak up on everyone.

It’s quite possible there won’t be a surprise package in MLS in 2017. What the Rapids did from 2015 to 2016 was remarkable. Though MLS is still based on the notion of parity and the belief that any team can win year-to-year, it’s getting more difficult to do all the time.