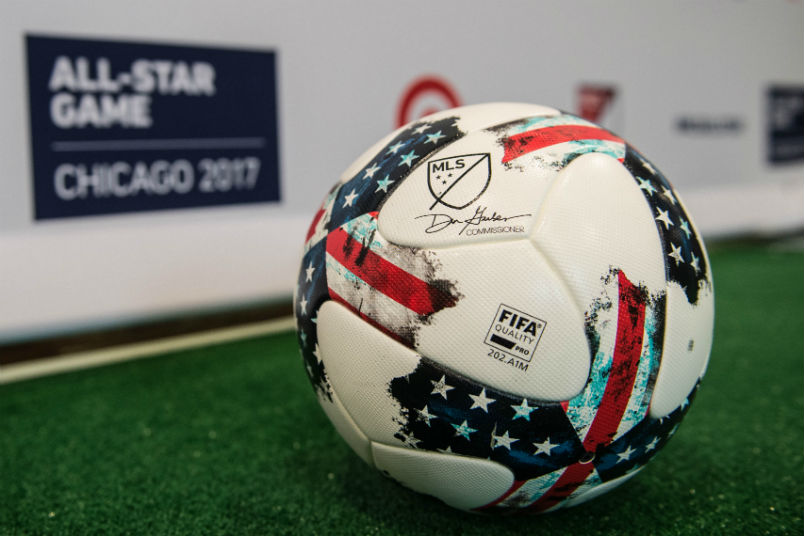 By Jason Davis – WASHINGTON, DC (Feb 1, 2017) US Soccer Players – Tuesday was a big day for Major League Soccer. The league’s deadline for interested parties to submit bids for spots 25 through 28 in the growing competition brought in a dozen proposals from across the country. MLS turned the process into a ceremonial event, taking in the ornately packaged bids and sharing details with fans on its website.

MLS also chose Tuesday to announce plans for the 2017 All-Star Game. The league’s annual midseason extravaganza is still one of the tentpoles of the calendar, holding a prominent place as a showcase of its talent and as a way to service its biggest corporate partners. The game is as much about doing business as it is abou playing soccer. Even if MLS no longer saw value in the All Star Game as a marketing device, it would still make sense to hold the game because of the ancillary benefits. MLS did one better, putting it in an NFL stadium this season.

MLS commissioner Don Garber, Chicago mayor Rahm Emanuel, and Chicago Fire owner Andrew Hauptman gathered on Tuesday afternoon at Soldier Field to make the announcement that the 2017 MLS All Star Game would take place in that venue. The format stays the same. All-Stars vs foreign club. Though he didn’t name the opponent, Garber did say that fans could “assume it will one of the top five teams in the world.”

Rumors circulating in Spain initially suggested Barcelona. That’s now switched to Real Madrid, but the point is the same. MLS is bringing in someone big and expects a sizeable crowd. The super club summer touring schedule is an established part of American pro soccer at this point. Whether it’s those teams playing each other or MLS teams, the market is there. MLS is responding accordingly, returning to the type of high profile game they last used in 2010.

Over 70,000 turned out in Houston to watch the All-Stars play Manchester United. The All-Stars lost 5-2, but it was the moment that was important for the league. A big crowd watching MLS players take on a super club. That MLS scheduled the same team for the 2011 All-Star game in an MLS venue is part of the big picture issue for the league. They lost that one 5-0, but the smaller stage helped down play the disappointing showing.

Bringing in a “top five team in the world” for the match demands the larger venue of Soldier Field, rather than the smaller (and less central) confines of the Fire’s Toyota Park. As in years past, the league shouldn’t have trouble selling out the game on the strength of the opponent.

That, as is the case from year-to-year, prompts existential questions over the shadow MLS chooses to cast upon itself with the All-Star Game. The preferred format may, as Garber said on Tuesday, create the most “competitive” environment by the league’s reckoning. It also means that the league itself plays second fiddle to the opponent. The marquee at Soldier Field might read “MLS All-Stars v. [Big Euro Club]” but we all know it’s that European club driving ticket sales and TV ratings.

That said, the All-Star Game might have some small value left as an audience-building event. There’s no doubt that the League’s TV partners (in this case, FS1) will be happy to have the chance to showcase one of the biggest teams in the world. How many American soccer fans, tuning into the game to see that team, are going to tune back in when MLS returns to regular season play? Maybe the league has solid data on the conversion of the Euro-focused American soccer contingent into MLS watchers, but it doesn’t seem as any conversions have helped the league’s TV ratings.

There has to be at least a little thought that the game’s placement in Chicago might boost the flagging performance of the Fire in the region and marking of territory. Issues of Toyota Park’s location aside, it’s been a rough couple of years for the league’s original expansion franchise. Back in 98, it was Chicago and Miami extending the league’s footprint into major markets. Miami was gone after the 2001 season. Ironically, even as MLS has lots of choice among interested parties for four new expansion slots and is riding a wave created by the success of new teams, the situation facing the remaining member of the class of ’98 is troubling.

The club could even face a local challenge from a new NASL team that former Fire executive Peter Wilt is attempting to launch. That might be a ower division play, but they’re considering using Soldier Field.

Chicago is a massive market. MLS needed it from the beginning. It’s still an issue for national reach and TV ratings. The Fire’s terrible on-field performance still hasn’t given way to much progress. The relevance of the club is at a nadir both in the city and across the League.

Maybe an All-Star game in their backyard can increase support and help raise attendance at Toyota Park. If nothing else, the announcement of the game (and the coming announcement of the opponent) will give the team a chance to build around a central event no matter where they land in the standings in 2017. That certainly counts for something.