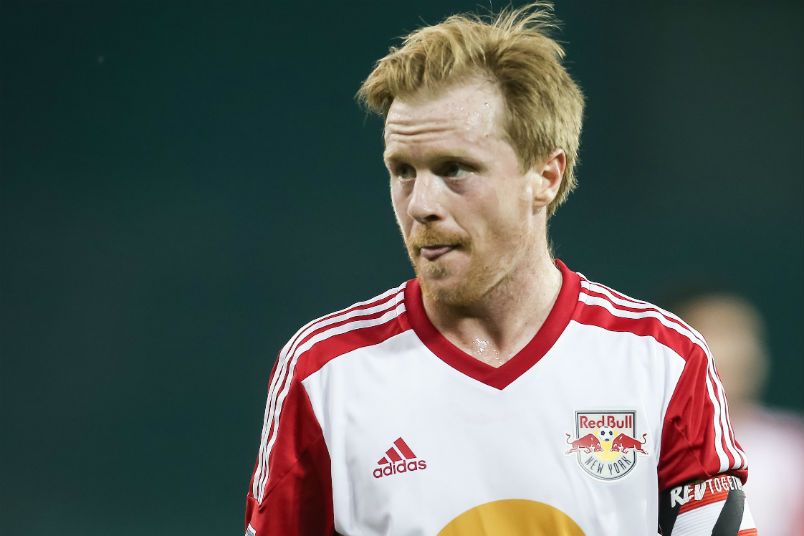 By Jason Davis – WASHINGTON, DC (Feb 17, 2017) US Soccer Players – On Thursday, February 16, the New York Red Bulls finally made official what everyone in Major League Soccer had known for weeks. Via a terse 300-word statement, the team Ali Curtis helped to two first-place finishes and a Supporters’ Shield in two seasons on the job announced that they had “mutually parted ways” with their erstwhile sporting director. It had taken more than a month for the Red Bulls organization to bring to an end the strange saga that has once again thrown the league’s most historically melodramatic club into the fires of controversy.

The power struggle that ultimately ended with Thursday’s press release and Curtis’s ouster started just as 2017 was getting underway. Reports say Curtis and head coach Jesse Marsch disagreed over which veteran midfielder – Dax McCarty or Felipe – the club should trade to obtains cap concessions and make room for young players coming up through their system. Just prior to the eventual trade of McCarty to the Chicago Fire for $400,000 of allocation money on January 16, Marsch left the Red Bulls contingent in Los Angeles (where the club was taking part in the MLS combine and SuperDraft) to fly to Austria for a meeting with the Red Bulls’ corporate overlords.

No one knows exactly what happened in Austria. Marsch isn’t saying. However, there’s strong reason to believe that Marsch was briefly considered for the coaching job with Red Bull Salzburg. When that situation didn’t come to pass, Marsch flew back to the US to resume his duties as New York Red Bulls head coach. It was then Curtis’s turn to depart from LA. After that, it was radio silence from both the nominal sporting director and the club that employed him.

The Red Bulls statement might finally bring closure to the strange happenings. It probably won’t make the club’s fans forgot the saga or soothe nerves made ragged by yet another case of upheaval. From the early days of the club as one of the MLS originals under the name “MetroStars”, the Red Bulls organization has been beset by semi-regular fits of self-imposed drama.

Just when it looked like the Red Bulls had finally shed the image of the league’s most dysfunctional club, an internal power struggle upends to the Curtis-Marsch partnership. For his part, Curtis went to great pains to backup the club’s characterization of the parting as “mutual”. He told FourFourTwo’s Paul Tenorio that the rumors swirling about the reasons for his departure are incorrect.

“In terms of what I’ve heard in articles or rumors, or the narratives in terms of what were those differences and who are those differences with, the vast majority of what I’ve heard is false,” Curtis said. “I don’t want to get into specifics of what have I heard, but I think there’s a lot of good staff, good people at that club that I have developed a relationship with, staff and players, and I want the best for them, I really do.”

Curtis’s protestations come just a week after McCarty criticized the Red Bulls for the handling of his trade to the Fire. McCarty made clear he believed management cut Curtis out of the decision-making process. Whatever the truth, Curtis’s departure mean two things.

First, every general manager/technical director/sporting director in the league should be slightly less comfortable in their position with Curtis unemployed. While there are no current openings at that level in MLS heading into the new campaign, MLS clubs will no doubt keep Curtis in mind should the need arise to make a change. A competent, even excellent, replacement sitting unattached creates new pressure on the men currently in charge of some of the league’s recent rebuilding projects.

Second, it puts the full weight of the Red Bull’s 2017 season on Jesse Marsch’s shoulders. Longtime MLS man Denis Hamlet is handling player personnel duties for the club, but there’s no denying that the Red Bulls are now a reflection of Marsch, and Marsch alone. Shipping the popular McCarty out, regardless of the return, means responsibility for the results of the season belongs to the head coach.

Marsch needs wins quickly to push aside fan concern over the exits of Curtis and McCarty. That’s in addition to the lingering resentment over the reports that he was nearly bound for Austria.

For a club that has given its fans more than enough reason to be wary of shakeups of this nature, Red Bull doesn’t seem conscious of the need for stability at its most visible management positions. We can only wonder what a smartly run New York Red Bulls team that keeps good people in the most important jobs might look like.

Again, Curtis leaving the club is a massive surprise exactly because he was a success in the job. He shares credit for turning the Red Bulls into an MLS Cup contender with Marsch. Not only did Curtis bring Marsch in, he also deserves extra plaudits for constructing a winning team on a budget. The Red Bulls had the smallest payroll in the League last season. It was an abrupt about-face from the club’s previous approach.

The big imaginary board that reads “X days since drama” resets to zero. With the history of the club in mind, we shouldn’t it to count too high before the Red Bulls do drama again.