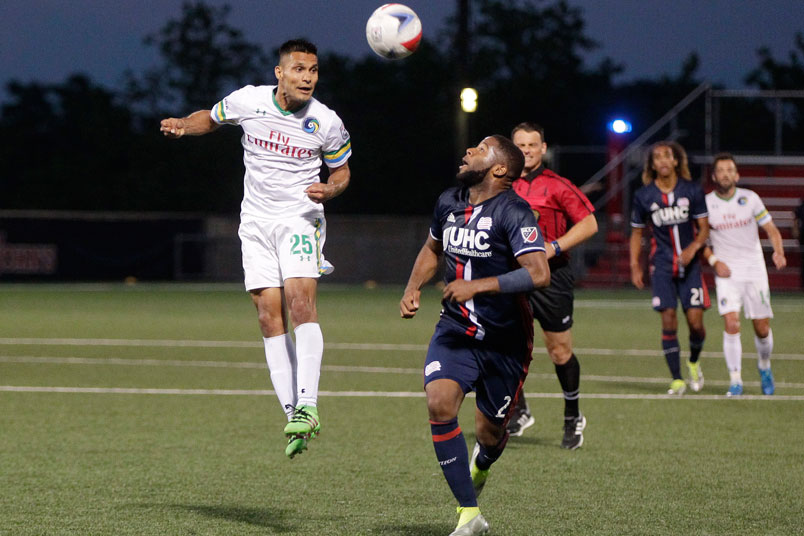 By Jason Davis – WASHINGTON, DC (Mar 22, 2017) US Soccer Players – It doesn’t seem to matter who’s in charge of the most storied name in American soccer. The New York Cosmos are always a lightning rod. Maybe there’s something about the brand itself that attracts the iconoclast. These figures who see the Cosmos as a means to rocking the proverbial American soccer boat.

In their 70s heyday, the Cosmos were one of the most famous clubs in the world in a country that didn’t know much about soccer. Back then, they had a chairman who cared as much about publicity as he did about winning soccer matches.

The latest figure to grab the platform provided by the Cosmos name is Rocco Commisso. He’s a telecommunications mogul who once played soccer for Columbia University and whose name graces the soccer venue for that school. Commisso swooped in to save the new Cosmos when it looked like the club would fold after the 2016 season, reportedly having lost $30 million since their relaunch. As a condition of his purchase of the Cosmos, Commisso demanded that the NASL retain its second division sanctioning. US Soccer acceded to the request, thereby making Commisso something of a hero for the league.

Whatever soccer capital Commisso earned from his gambit, he seems anxious to test its limits. As the reformed Cosmos get set to launch their 2017 season, the new owner decided to throw out a series of explosive comments at the club’s media day on Tuesday afternoon in Brooklyn. He started by taking direct aim at everything that has been accomplished in American soccer since the dawn of MLS.

Commisso says the peak American Soccer was in the 1930s, when the US made the semifinals of the World Cup. #Cosmos

It might be worth pointing out that Commisso is referencing the first-ever World Cup, a tournament that involved just 13 teams. The United States progressed to the semifinals by virtue of winning a three-team group with Paraguay and Belgium and was summarily dumped from the tournament by Argentina 6-1.

The international game was in its infancy in 1930 (none of the Home Nations participated, for example), so comparing the state of the American game then to what it is now seems disingenuous at best. Based purely on round reached at the World Cup, 1930 was indeed the “peak” of American soccer. That assessment does, perhaps intentionally, ignore a host of other factors.

Of course, Commisso’s reference to a tournament that happened nearly 90 years ago was merely the setup for a further flaming of American soccer’s current state. As the man in charge of the only American soccer club to achieve international fame, it apparently falls to Commisso to comment on why the sport in this country has, according to Commisso “failed.”

Commisso: “My opinion: The number one reason that US pro soccer has failed [is the lack of pro/rel].”

Failure is a subjective label, but again Commisso seems to be pushing a narrative that doesn’t mesh with reality. While professional soccer in the United States is by no means a massive success, to call it a “failure” denies that a thriving top division with average attendances of 20,000+ in a host of soccer-specific venues and a national television contract is representative of some success.

Commisso wasn’t done, and linked his thoughts on promotion and relegation directly to his new acquisition.

Commisso: The Cosmos should be moving up to MLS, not Minnesota.#Cosmos

The Cosmos won the NASL title last season, their third in four years. That on-field success, which Commisso says should mean moving up to Major League Soccer at the expense of Minnesota United, did little for the club’s financial outlook. So difficult was the stadium situation for the Cosmos that the NASL title game – the marquee match of the year – took place in a tiny, 2,500-seat college soccer stadium at St John’s University. The building was not full, and the fans in attendance spoke mostly of the slow collapse of the 2.0 Cosmos when prompted to opine on the current state of the team.

Maybe what those fans want to hear is the new owner push a promotion/relegation narrative. The Cosmos, despite their corporate history and contrived modern rebirth, have served a the club of choice for a vocal group of pro/rel supporters. Commisso is feeding into that identity when the club’s relevance is at a modern nadir. Big talk gives fans, especially those who believe in the pro/rel system or feel the Cosmos’s rightful place is in the top echelons of the American game, a reason to stay with the team.

The disconnect between the legacy of the name and the actual condition of the modern Cosmos means the two are in desperate need of a new bridge. Previously, the bridge was the proposal (and imagined realization) of a 25,000-seat stadium project in Belmont, an idea that promised a return to the big time. With that proposal now dead, Commisso is using pro/rel to position the Cosmos as unfairly penalized by the system. It’s not at all a ridiculous approach.

Commisso’s strategy is likely less about pro/rel than it is about generating buzz for a club that desperately needs it. The Cosmos aren’t starting from scratch, but with the shaky state of the NASL itself and the massive turnover in the club (not to mention a change of venue), the new owner needed to get people talking about his team.