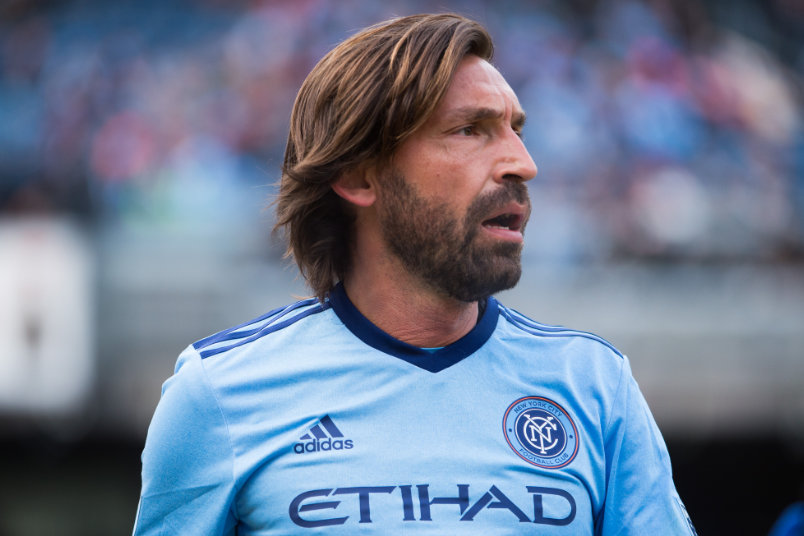 By Jason Davis – WASHINGTON, DC (Mar 15, 2017) US Soccer Players – Andrea Pirlo is many things. Fashion icon. Wine connoisseur. New Yorker. Soccer legend. What he is not is an expert on the business of Major League Soccer, or how the way MLS operates affects its ability to compete in the larger soccer world. It’s important to keep that in mind when parsing Pirlo’s recent comments to Gazzetta dello Sport in his native Italy.

“I’ve seen improvements and from what I have seen in friendly games and the first two rounds of the regular season, the quality has risen a lot,” the NYCFC midfielder said. “Certainly I would get rid of the restrictions on the transfer market, though. Enough with the three exceptions to the salary cap, which is too little to convince other stars to come here. They need to develop a liberal system where you can buy and sell players without restrictions.

“Now there is even the competition from China. Especially if you want to compete with other leagues, at home and abroad, you have got to get rid of any restrictions.”

Pirlo, like so many people both inside and outside of the sport, sees the growth of Major League Soccer in pretty simple terms. If MLS wants to compete with the biggest leagues in the world (which they’ve consistently said they do), then they need to spend more money to fill out rosters with more than a few big names. Unrestricted spending is the only way MLS will pull itself up into that particular echelon. Pirlo says this with almost no consideration for the league’s revenue.

We know that it’s not going to happen, at least right now, and likely not for a very long time. The MLS owners have shown no appetite for loosening the purse strings to such an extreme. A recent, modest jump in league spending was largely facilitated by a television contract that pays MLS more than its rights are worth. That’s an investment in the future. The vintage of players arriving in the wake of the TAM rule are already making a difference.

Add that to the intense expansion interest the league is getting, solid attendance almost across the board, and a rising national profile. There’s almost no reason for MLS to change its approach.

Pirlo’s reference to China and the competition that league might provide MLS in the player market falls apart with just a bit of scrutiny. It’s true that the Chinese Super League is in the midst of an unprecedented spending spree. That might already be slowing. The Chinese Football Association is already applying the brakes. It’s a more complicated picture than the one Pirlo alludes to.

China is currently grappling with a problem MLS itself is facing, though with a few distinct differences. With a massive government-led push to improve the state of soccer in the country, the corporate owners of China’s biggest soccer clubs dove headfirst into the deep end of the transfer market. To both boost the popularity of their league on a short timeline and to curry favor with the soccer-mad president of the country, Xi Jinping, CSL clubs paid gargantuan premiums to lure European and South American stars to the country.

China, and Xi Jinping specifically, don’t want to turn the CSL into a home for overpaid stars at the expense of the Chinese player. After a wave of what they termed “irrational spending”, the Chinese FA issued new rules limited the number of foreign players a team could field at any one time. The rules allow only three foreigners in the starting lineup. Teams have to use at least one Chinese U-23 as well. Those new mandates belie the conflicting ideas shooting their way through the country’s soccer leadership. On the one hand, spend, get bigger and better, and attract attentions. On the other, give as many Chinese players as possible a league in which to grow.

China doesn’t want to be an international afterthought in the men’s game forever. Bringing in Carlos Tevez and Oscar will raise the CSL’s profile. Perhaps Chinese players would improve by being around world class stars. However, it’s clear that the Chinese FA sees more jobs for more Chinese pros as paramount.

Compare this to MLS. The league has turned more towards foreign players as the size of the league has increased. That’s thinned the number of quality American players. MLS consciously chose to fill a talent gap with players from outside of the country, as a means to improve quality of play quickly. On opening day of the 2017 season, less than half of MLS starters were born in, or eligible to play for, the United States.

If Pirlo’s focus is purely on the most famous names in the sport, players like himself who have the pick of several secondary leagues as they hit their mid-30s and bring significant marketing clout along with them, then perhaps he has a point about Chinese competition with MLS. Then again, based on the number of available spots for foreign players it seems it’s MLS, not China, that will have more of an appetite for a certain type of star.