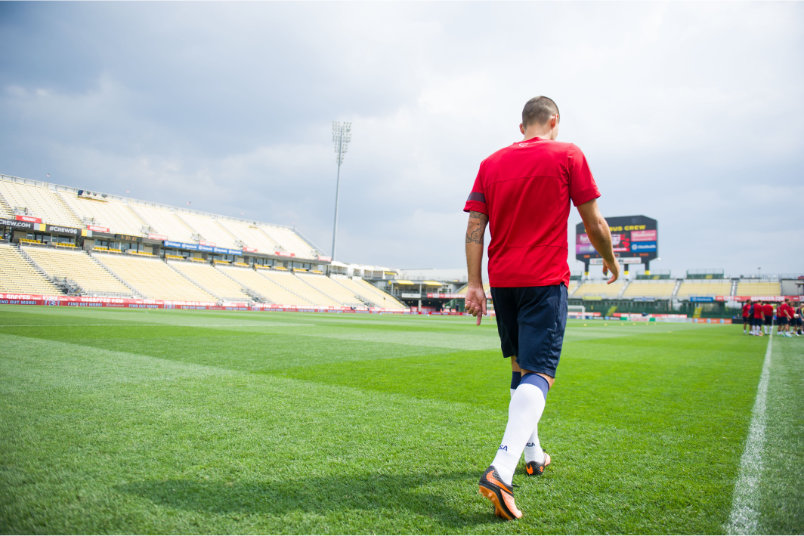 By J Hutcherson (Mar 9, 2017) US Soccer Players – Everybody in pro sports wants to build their version of Dodgers Stadium. They want to get the location and design right to begin with, becoming an archetype for what’s best about where we play sports. There’s a reason waves of stadiums have come and gone since Dodger Stadium opened in 1962. At this point, stadium longevity is something few people expect.

Later this season, Atlanta United will share Mercedes-Benz Stadium with the Atlanta Falcons. Sizing the field area and the lower bowl “with soccer in mind” is now standard practice for National Football League stadiums. An earlier generation of stadiums makes it difficult to fit an appropriately sized field. With the number of lucrative games on offer every year in the United States, it doesn’t make sense to build a venue so it’s gridiron-specific.

In other words, that push for soccer-specificity is not the same issue it was when the Columbus Crew needed an alternative to a college football stadium. Things change, and that’s one of the problems for looking at any stadium as a decades-long answer. They just aren’t, at least not anymore.

MLS already has an issue with earlier generation venues not comparing well to the latest versions. In a press event at Philadelphia’s facility, commissioner Don Garber said in response to getting to a stadium without easy connections to public transportation, “It’s not necessarily a concern because if we didn’t have that facility, we wouldn’t be here in Philadelphia. This team has been able to be successful and do it in spite of the fact that there isn’t enough public transportation.”

Some leagues won’t settle for “in spite of” in the long term. National Hockey League commissioner Gary Bettmann is trying to help an effort to move the Phoenix Coyotes out of suburban Glendale. It’s no surprise that the major threat to a metropolitan area in that situation is to move the team to another city.

The NHL picked the wrong suburb, something that keeps leagues as well as families up nights when they’re planning their future. Their are enough dead and dying malls and aging developments to make anybody wonder what works over the long-term. Being able to forecast that is right up there with fortune telling.

FC Dallas is in a situation where they might have picked the wrong road. The Dallas Cowboys are building their mixed-use training center four miles south. Echoing Garber’s comments about Philadelphia, Dallas ending up where it is to keep the team in the area.

Chicago also went suburban shopping, ending up in Bridgeview as part of a larger development that never happened. The public transportation issues loom there as well in a new era where assuming people have cars simply doesn’t work anymore.

For most stadiums, a countdown begins as soon as they open. Eventually, there will be a significant overhaul costing significant money or a new pitch for an entirely new venue. That window of time when everything is fine in a nice new home grows shorter whenever anybody else gets something new.

It’s no different in MLS. Orlando City’s nice new home should have other teams looking around and seeing what they can remodel. The team as NFL tenant model was once the league’s greatest hurdle, but now it’s fine. The difference is MLS teams getting better deals to use venues they can’t build on their own. It certainly helps when they can draw big crowds to those big stadiums.

A team that built the 2000s-era panacea of a soccer-specific stadium is going to want something else. Others will follow. What we’ll see is another phase of North American soccer stadium construction following the established pattern. What was once great isn’t so much anymore. For the team to be able to prosper, it’s going to need to move somewhere else. Some would argue that we’re already seeing this happen.