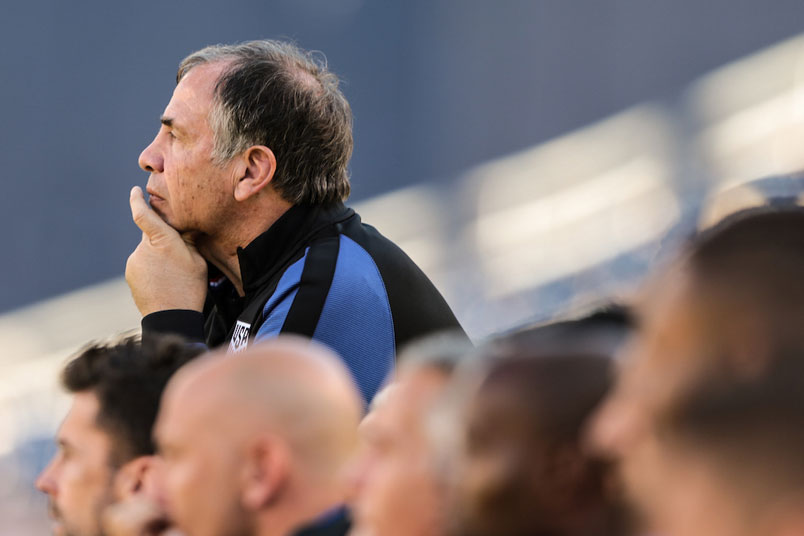 By Charles Boehm – WASHINGTON, DC (Mar 16, 2017) US Soccer Players – The final countdown to this month’s massive World Cup qualifying matches began in earnest on Wednesday. Bruce Arena unveiled his 24-man USMNT roster for the games against Honduras On March 24 and Panama on the 28.

What formation will the USMNT use? What sorts of tactics will predominate? Who will he decide to start in some key positions of uncertainty? There’s plenty to discuss between now and next Friday, when the Yanks welcome Honduras to San Jose’s Avaya Stadium.

Vets get the nod

An 0-2 start to the Hexagonal has brought on tense circumstances. So it’s no great surprise that experience counts with this roster. 19 of the players have previous qualifying caps. 10 have appeared on the road to the World Cup 12 or more times. Clint Dempsey, Jozy Altidore, Tim Howard, Michael Bradley, and the ageless DaMarcus Beasley all carry upwards of 30 qualifiers on their resumes.

No one in this squad will have any uncertainties about the stakes or the challenges. That said, Arena did call in enough younger and less familiar faces to give them hope. To wit: Jorge Villafaña, Walker Zimmerman, Kellyn Acosta, Sebastian Lletget, Dax McCarty, and Christian Pulisic.

“The primary rationale is to help us be successful in these two games,” Arena said. “But we’re also looking down the road and bringing in some young players that we think have an opportunity to be an important part of the national team program as well.”

Arena is as wily and pragmatic as they come. Don’t get us started on the adaptation to a 3-5-2 formation he and the USMNT pulled off on the fly in South Korea in 2002.

“We put together a roster that we think has balance and one that gives us an option in playing a number of different ways,” Arena told USSoccer.com this week.

He’s a longtime friend of the straightforward 4-4-2 shape. It’s hard to see him rolling out anything different this month – not by choice, at least.

With Dempsey, Jozy Altidore, Jordan Morris, and Bobby Wood, the US options up top offer form, depth, and diversity. You can certainly argue that all four do their best work with a partner. Should Arena agree, the arithmetic unfolds pretty easily from there.

The only real alternative to 4-4-2 would be that 3-5-2 look again. Given how problematic Jurgen Klinsmann’s abrupt use of that shape against Mexico in November turned out to be, that smells like a gamble Arena won’t be eager to repeat. It could certainly appear in a worst-case scenario where the US find themselves trailing and needing to throw everything forward.

Calling Arena a 4-4-2 evangelist might do him something of a disservice, given how adaptably he’s used the formation over the years, especially with the LA Galaxy, his prior gig.

The trip to Panama, an ostentatiously hostile destination in qualifying over the years, probably calls for a more defensively robust outlook. Factor in the return of veteran head Jermaine Jones from a cautions suspension for that one, and you have an inviting occasion for the old “empty bucket,” with two defensive/destroyer type central midfielders and counterattacking pace on one or both wings.

Against Honduras, victory is an absolute priority, as US Soccer’s “#Get3” (points) hashtag emphasizes. So this requires some degree of variability and unpredictability, especially given the rugged Catrachos defense. Expect two contrasting approaches on the Yank flanks, then.

For example, whichever side Fabian Johnson winds up on – and whether it’s as a midfielder or a fullback – he’ll bring range and attacking ambition. In a 4-4-2 that would pair well with a savvy mid capable of pinching centrally to give him space and options to combine, like Alejandro Bedoya, Darlington Nagbe, or Sebastian Lletget.

If FabJo is further up the pitch, a stay-at-home, defense-first fullback like Michael Orozco or Tim Ream would keep things tight behind him. The opposite wing would in most cases feature a contrasting skillset balance between defense and midfield.

Pulisic’s daring exploits on Europe’s biggest stages – to say nothing of his lively outings in US colors – have all stripes of USMNT fans buzzing. No one doubts that he’ll be a key weapon for Arena for the foreseeable future, save (perhaps) a brief summer break for rest and recuperation. But where to play him?

Here it’s harder than usual to distinguish between Arena’s plain-spoken norm and his possible use of verbal misdirection to keep opponents guessing. The coach has recently dropped soundbites hinting at both a wide midfield tasking for his teenage prodigy and a central playmaking role.

It’s not out of the question that Pulisic could see time at both spots over these next 180 minutes of play, depending on the circumstances. The Borussia Dortmund talent has spent most of the past year or so out wide for club and country. Klinsmann, however, thought enough of his abilities to shift the entire team into an unfamiliar formation to field him in a classic #10 role against Mexico.

Pulisic handled that daunting task with bravery and intelligence. It was the confusion and uncertainty at the back that undid that ill-fated 3-5-2 experiment in the end. If Arena wants to use him centrally in a four-man midfield, it becomes arguably an even heavier mantle for the young man, though.

Pulisic would need to be both tactically smart and physically relentless to provide Bradley with the necessary two-way support in that scenario. A pinching wide mid like Nagbe or Bedoya would help with cover and numbers. At least for the first of these two games, a more familiar wide gig seems like a better way to set Pulisic up for success.