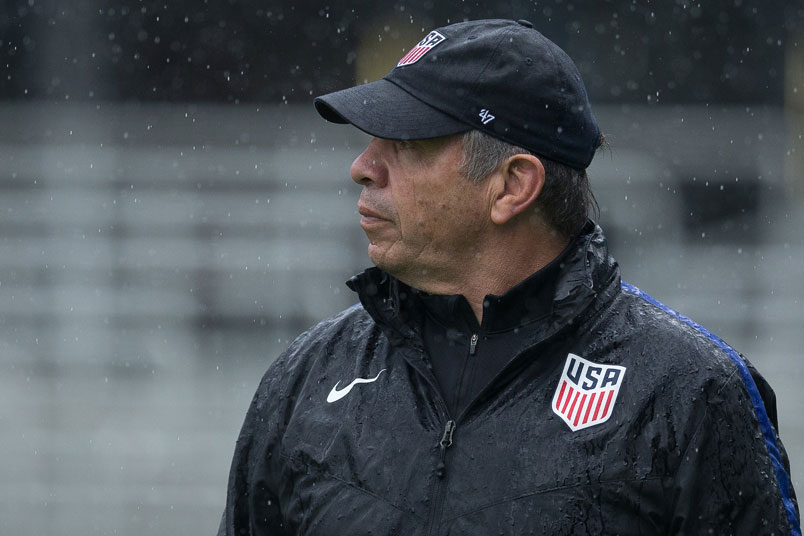 By Jason Davis – WASHINGTON, DC (Mar 24, 2017) US Soccer Players – It’s not that Bruce Arena’s semi-regular musings on the state of American soccer didn’t matter while he was leading the LA Galaxy. He won three MLS Cup titles, two Supporters Shields, and fully cemented his place as the greatest American soccer coach. It’s just that it didn’t have the same sort of weight it does now.

When a coach is in charge of the USMNT, the supreme bellwether for the health of the sport in the United States, any and every comment he makes about the progress soccer has made is bound to reverberate through it. That was certainly the case for the five years Jurgen Klinsmann was in charge. No USMNT coach in history talked so much or was given so much freedom to opine on conditions from the very bottom of the ladder all the way up to the top. No coach in history made so much hay from his position.

The perspectives that Arena and his predecessor brought to the job are very different. That’s even before considering that Klinsmann’s title of USSF Technical Director gave his observations additional heft. Klinsmann is a European, and no matter how long he has called the United States his home, growing up and playing in his native Germany influenced his viewpoints. How could it not? Perhaps that meant he was more apt to be critical, or to believe the American soccer establishment to be naive. Often, Klinsmann’s thoughts about soccer here took direct aim at the quality of the American player and coach in ways that rubbed some people the wrong way.

Again, perhaps Klinsmann in that role was slaying some sacred cows that needed it. We really can’t appreciate the impact of his five-year tenure outside of the results on the field. At least not yet.

Arena runs at his position as American soccer tone-setter with a decidedly unapologetic bent. Not only is Arena’s provenance American, but his education as a coach is built upon a foundation of on-the-job training collected exclusively in American soccer environs. Arena had no professional career to speak of. He didn’t spend any time working in Europe. He chooses not to defer to foreign soccer ideals. A young American coach can’t avoid bringing to the job a wealth of influences because of the interconnected nature of our world. Arena comes from an era when there were real limits on consuming and integrate foreign ideas into a coaching philosophy.

It’s against the backdrop of American inferiority highlighted by Jurgen Klinsmann that some of Arena’s recent quotes on coaching to Matthew Futterman of the Wall Street Journal stand out. Arena makes no attempt to pay lip service to the game’s greatest minds, the way many of his younger colleagues might. He doesn’t express his respect and admiration for the tactical brilliance of this coach or that, but instead boldly claims there’s not much he could learn from those European figures.

“There is nothing about soccer we don’t know. A lot of coaching is just having an eye for players, and knowing what they do well and what they don’t do well, and communicating with them.”

“I could learn as much or more from Bill Belichick as I could from the manager of Manchester City.”

“I think it’s critical to learn what coaching is and how to manage a team, and the sport is immaterial.”

This is not the first time Arena has expressed ideas along these lines, but this might the moment in which his thoughts will have the most resonance. Soccer is bigger than it has ever been in the United States, and his return to the USMNT helm comes at a time when confidence in the program is at a low point. There’s reason to think both that American soccer should be assured of itself and that listening and learning from some of the more successful minds in the game would be prudent.

Bruce is Bruce, at least in the sense that he has little patience for soccer exceptionalism. For Arena, the game as played at the highest levels is very rarely about tactical tweaks and almost always about the management of the players and team dynamics. A man who took the Americans to the quarterfinals of a World Cup and played Germany dead even when he got there certainly has the right to speak on how best to get the most out of a USMNT. Still, his words will strike some as myopic and overconfident.

It’s not a wholesale rejection of tactics. Of course Arena uses them and is thoughtful about them. Instead, it’s a refutation of the notion that Americans lag behind the rest of the world in that area. Arena’s suggestion that he has more to learn from Bill Belichick than the “manager of Manchester City” as a head coach makes clear his thoughts on the matter. These words are not mince.

As much as this is a simple return to a bully pulpit for Arena’s famous gruffness, it may also be part of something more calculated. Under Klinsmann, nearly everything about the American and the American player was questioned, criticized, and diminished at one point or another. Arena’s exhortations about American coaches fits nicely inside a new narrative that aims to boost confidence in American soccer

As much as there is a national consensus about the game or the state of the national team, it’s the USMNT boss that can most often affect its trajectory between games. Arena needs to win, because there’s no substitute for victories when it comes to sports. That won’t negate the possible impact of any and all statements he makes on the state of the game in the U.S.

Arena does not apologize for his Americanness. He’d like the rest of us to refuse to the same. After five years under a coach whose preferred method of prompting progress was to point out every one of American soccer’s flaws, it’s a message that will take getting used to.