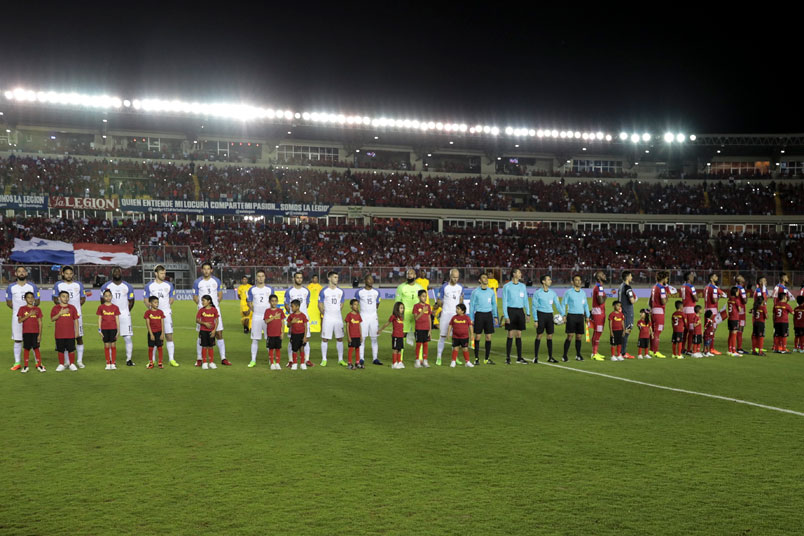 By Jason Davis – WASHINGTON, DC (Mar 31, 2017) US Soccer Players – The picture for the expanded 48-team World Cup is starting to come into focus. FIFA released their proposal for dividing the places for the tournament on Thursday. The increase in the number of participants means some confederations stand to see a significant bump in representation in 11 years time. Since FIFA has never reduced the number of teams in the World Cup after an increase, we can only assume that this split will be the way of things. At least until another FIFA president sees value in pushing for an ever bigger tournament field.

The proposal is only that. It needs ratification by the FIFA council at a meeting in Bahrain in May. There’s no reason to believe anything will change between now and that vote, however. The heads of the six member confederations approved the proposal, setting the stage for the full vote. There’s even an extra wrinkle in the plan, with FIFA proposing a 6-team playoff for the final two spots.

The reaction to the proposal from soccer fans and media was swift and largely negative. With the expanded field already assured, the soccer world has wrestled with the ramifications for months. Seeing it in an actual proposal only solidifes the commonly held belief. 48 teams is not only too many teams for the finals, but that the larger field will render much of the qualifying process meaningless.

It’s difficult to get past that reality.

Let’s start in CONMEBOL, where some of the game’s greatest nations battle every four years through a gauntlet to make the World Cup. With only 10 teams, CONMEBOL is the smallest of FIFA’s confederations. They run a single stage round robin to determine its World Cup qualifiers. Because of the strength of the region, four teams currently gain entry directly with a fifth team placed in a playoff against a country from another confederation. Invariably, the CONMEBOL nations prevails, giving them five teams in the World Cup proper.

FIFA’s proposal gives CONMEBOL six guaranteed teams in a 48-team field. While that’s just a net gain of two spots, it means 60% of the confederation makes the tournament. Running a long, grueling schedule of 18 matches to eliminate four teams seems questionable at best. Add in the extra playoff spot, giving a seventh team a chance at qualification, and it’s even more ridiculous.

CONCACAF has 35 member associations, many of them tiny countries with small populations and limited resources. The strongest soccer nations in the region battle for three guaranteed places and a playoff spot with a rotating cast of second tier countries. FIFA’s proposal alots six places for CONCACAF in the expanded tournament.

That renders the final round of CONCACAF qualifying unnecessary. Under the current format, all six of the nations that make the “Hex” would go to the World Cup. Without so many countries making the tournament, there is no longer a need for the United States and Mexico to play each other in World Cup qualifiers.

It’s clear from FIFA’s proposal that the goal isn’t to make the World Cup stronger or to attempt to maintain a certain quality of play. More teams coming from CONCACAF, AFC, and even CAF means a more diluted tournament. UEFA, the strongest region with a host of teams capable of making the knockout rounds of any World Cup, gets only three more spots. While that would mean one-third of the field would come from Europe, 16 places in a 48-team tourney is a 7% net decrease for the confederation.

It’s worth wondering if FIFA is only accelerating the slow collapse of the international game with a step meant to prolong its life and spread the sport beyond its traditional strongholds. While the World Cup is getting bigger and countries like China and India will have a better chance than ever before to reach the pinnacle of international soccer, that same expansion threatens to render traditionally important qualifying tournaments pointless, uninteresting, or both.

Who’s to say Argentina or Brazil doesn’t send out “B” teams in what were once crucial qualifying dates in places like Bolivia, Peru, or Venezuela? How does eliminating important games against Mexico and Costa Rica help the USMNT improve? Is the addition of nations like Bahrain, Mali, Equatorial Guinea, Panama, Haiti, et al make up for what international soccer loses between World Cups?

Already there are plans to try and fill the void left by a less fraught qualifying process. CONCACAF looks set to propose a “Nations League”, similar to a competition UEFA is instituting in 2019. Whether a competition like that captures the attention of the member associations and gains the same cache of Hex qualifiers is open to question.

Things will always change. FIFA’s chosen path aims to engage more of the world, as much of a third of the total population, with a bigger tent. The question that they have to ask themselves is whether all of the nations currently under the smaller version are going to stick around for the new, more accessible party.