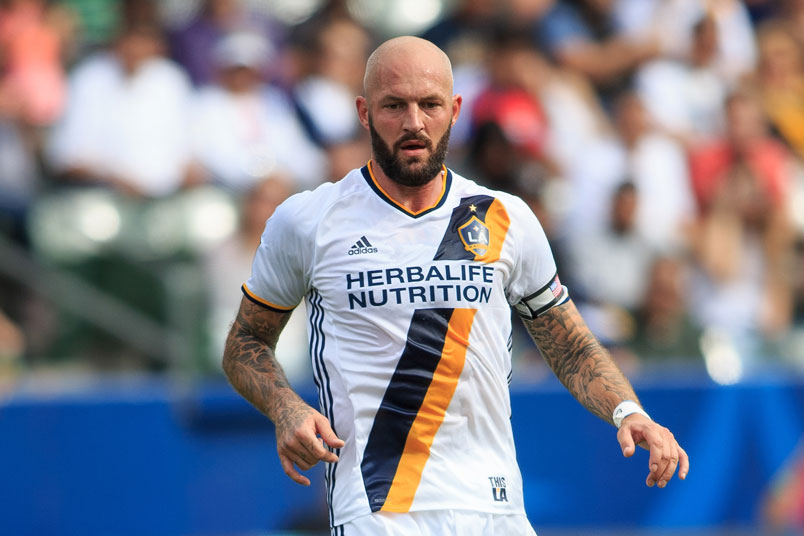 By Jason Davis – WASHINGTON, DC (Mar 17, 2017) US Soccer Players – The MLS Disciplinary Committee announced their Week 2 decisions on Wednesday afternoon. The release, as is too often the case, was highly anticipated. This particular week it was the expectation that the DisCo would address a pair of high profile fouls in the match between the LA Galaxy and Portland Timbers. Galaxy defender Jelle Van Damme headed to the locker room because of the two yellow cards he picked up on the fouls. Fouls, worth noting, that came just three minutes apart. Fouls, we should also note, that didn’t involve any contact.

In both cases, Van Damme went to ground in an attempt to tackle the ball away. In both cases, the Timbers player on the other end of the tackle (Diego Chara in the first, David Guzman in the second), fell over Van Damme without a hint that the tackle connected.

Sure enough, MLS did address the two incidents. Separate events as they were, they were each judged on their own merits. This resulted in something of a split decision. Rather than clarifying the situation on retroactive refereeing or diving, it will only complicate the picture moving forward.

According to the DisCo, Chara is guilty of simulation/embellishment, without question. All five members of the Disciplinary Committee panel – made up of three former players, two former coaches, and a former MLS referee – agreed with that conclusion. Chara gets a fine but not a suspension because the incident did not have a “material impact” on the match.

Keep in mind that Van Damme earned his first yellow for dissent when he argued with referee Baldomero Toledo about the foul on Chara.

It’s the decision about the second foul, the one on David Guzman that earned Van Damme his second yellow and a sending off that is more interesting. Upon first glance, it certainly looks like Guzman is as guilty as Chara of simulation, and that the foul was erroneously called. As Van Damme slides, Guzman throws himself groundward, landing awkwardly on his shoulder. The collision with the turf caused an injury that forced Guzman out of the game.

The Committee could not reach a unanimous conclusion on Guzman’s action. According to MLS vice president of competition Jeff Agoos, certain members of the committee believed Guzman may have dived to avoid contact with Van Damme and protect himself from injury.

Of course, Guzman did in fact suffer an injury to his shoulder, on which he landed when he either dived or athletically avoided contact with Van Damme. One can’t help but wonder if the fact that Guzman couldn’t continue after his injury played any part in the committee’s decision. If they viewed the result of the “dive” to be evidence that he didn’t dive at all. Why would a player throw himself to the ground risking injury if he was attempting to deceive the referee?

Diving is so entrenched in the soccer culture at this point that it’s certainly possible that Guzman launched himself forward in an instinctual dive, unconcerned or unaware about that possible of injuring himself. As the committee could not reach an unanimous decision, Guzman gets off with no fine and no suspension. Only the ignominy of his injury will serve as a deterrent for future acts of embellishment.

What kind of precedent does the decision on Guzman set for MLS moving forward? The Disciplinary Committee and the act of retroactive refereeing should clear up mistakes made on the field. Baldomero Toledo got it wrong, so the DisCo is going to come in behind him and mete out the proper punishment. Except, in this case, a case where a player went to the ground despite absolutely zero contact from the opposing player, the committee decided there isn’t enough evidence to convict. If it’s not the fact that Guzman injured himself that mitigated his guilt, then every diving incident from here forward will be chock full of doubt based on the decision made this week.

Never mind that the league seems poised to make more of a meal out of the situation by cracking down on the LA Galaxy social media team. They put together a meme around Chara and Guzman’s theatrics that went viral. Since most fans know that diving is part of the game (even if they despise it), there’s little damage done to the reputation of MLS referees. Was Toledo conned? So are so many other referees attempting to officiate a increasingly unmanageable sport. MLS refereeing already suffers from a rather negative perception. It’s one the league is constantly fighting against. That doesn’t change the reality of seeing heavy-handed action as reactionary and vindictive.

After the MLS All-Star Game in August, the league plans to install the Video Assistant Referee system for all MLS games. Presumably the VAR system will eliminate much of the DisCo’s work. If a player dives and a yellow card issued to the defender, the VAR process will allow a reversal of the call.

Problems with the amount of time it will take to review calls aside, the Guzman decision highlights the problem with any notion that video replay can provide 100% certainty on a given call. If the Disciplinary Committee can fail to reach a consensus with as much time to review the sequence as they need, how can the referee make an unequivocal decision inside a 30 second or one minute window?

Much like retroactive refereeing, the VAR system is nothing more than a way to present an image of correctness when such a thing is slippery and nebulous at best. Much of soccer is subjective. There’s no better example of that inescapable truth than the fact that Portland Timbers midfield David Guzman probably dived but might have have dived in a bid to escape contact. Maybe.