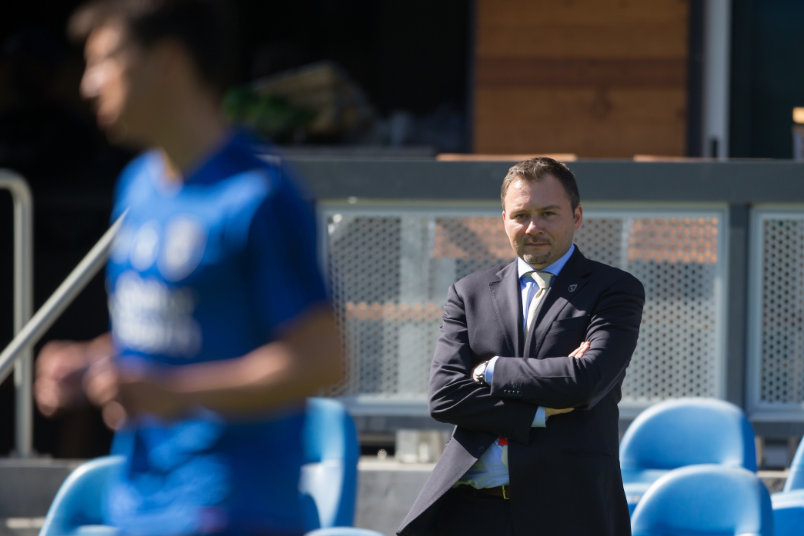 By Jason Davis – WASHINGTON, DC (Mar 10, 2017) US Soccer Players – San Jose Earthquakes general manager Jesse Fioranelli wasn’t a typical choice for the job when his new club hired him to replace John Doyle in January. Fioranelli joined the Quakes from Roma, where he was part of management team that oversaw player scouting, player development, match analysis, and recruitment. Prior to Roma, Fioranelli worked for crosstown rival Lazio as well as Turkish club Samsunspor. The international pedigree, as impressive as it might be, makes Fioranelli something of an odd duck in the unique world of MLS.

Typically, MLS recruits its personnel managers from inside the North American soccer community. Even those with foreign backgrounds, like FC Dallas’s Fernando Clavijo, have long ties to the American game. This makes sense. MLS rules and player acquisitions processes can be difficult to navigate even for people familiar with them.

Fioranelli himself has a diverse history. He attended high school in Maryland before going on to study in both Switzerland and Wales. He speaks five languages. He recently joked to the San Jose Mercury-News, “I do math in German, writing in English and often when I’m having logical thought, I think in Italian.”

Very much like the thinking that goes for hiring head coaches, choosing a general manager with zero MLS knowledge is a significant gamble. The learning curve is steep. With the league’s rules for signing players and fitting them under the salary cap constantly changing, it’s tough even a seasoned veteran of the game. Signing up reinforcements is never simply a matter of securing the necessary approval from ownership. There’s always a catch, an allocation order, or a roster designation that requires consideration.

So far, returns on Fioranelli are positive. Though he’s only been on the job for two months, Quakes fans themselves have spoken highly of their experiences meeting and chatting with the Italian. It’s almost impossible to know how large a role Fioranelli played in the signing of San Jose’s offseason acquisitions, but he hasn’t shied away from owning the results. Fioranelli projects the image of a someone who intends to put his stamp on the club just as the success or failure of the Quakes will have a serious impact on his reputation.

His background, and the fact he likely knew little of the hefty MLS cap rulebook before arriving in the US, speaks to new thinking about how to build an MLS roster. Fioranelli used to be a player agent. He has experience in the MLS player recruitment hotbeds of Europe and South America. He brings with him to Northern California a built in network of players and scouting contacts he can leverage in his new position.

Knowledge of the arcanery of MLS is much less important than being able to call upon global resources. Targeted Allocation Money, means an increase in spending power for MLS teams. That means more flexibility to sign players who would’ve been out-of-reach. When the goal is to find a diamond-in-the-rough or stretch every dollar as far as possible, having a general manager on hand who can reach around the world to find players is far less necessary. With the league becoming more of a destination and more refined assessment needed, clubs need new ways to maximize their return.

This is especially true for the Quakes. No one expects them to be among the league’s highest spenders in any particular area. The opening of Avaya Stadium a few years ago pushed San Jose in to the modern era of MLS. What they kept was a reputation for efficiency over star power.

The Quakes will be fascinating to watch with Fioranelli in charge. They have an old school MLS coach in Dom Kinnear. While undoubtedly still good enough to win in the league, he won’t wow anyone with progressive tactics. The club has been slow to get on the academy bandwagon. San Jose has only signed two homegrown players in their history. Tommy Thompson and Nick Lima both joined via technicalities within the rules rather than a strong link to the club.

San Jose hasn’t made the playoffs in four seasons. That’s unacceptable in a league that promotes parity and allows six teams per conference to make the postseason. Only the Chicago Fire have a run of failure that long among teams with a history prior to 2013. Like the Fire, San Jose is searching for the solution in unconventional places. At least when it comes to the man in charge of their player personnel decisions.

Fioranelli is a test case of sorts. An experienced soccer executive with a lengthy resume built in Europe comes to the United States to see if his knowledge can help turnaround a frugal team. Will the league eat him up with its strange cocktail of roster rules and salary caps? Or can the man with the international pedigree transform San Jose into a winner and open the door for a wider range of personnel managers to make their way Stateside?