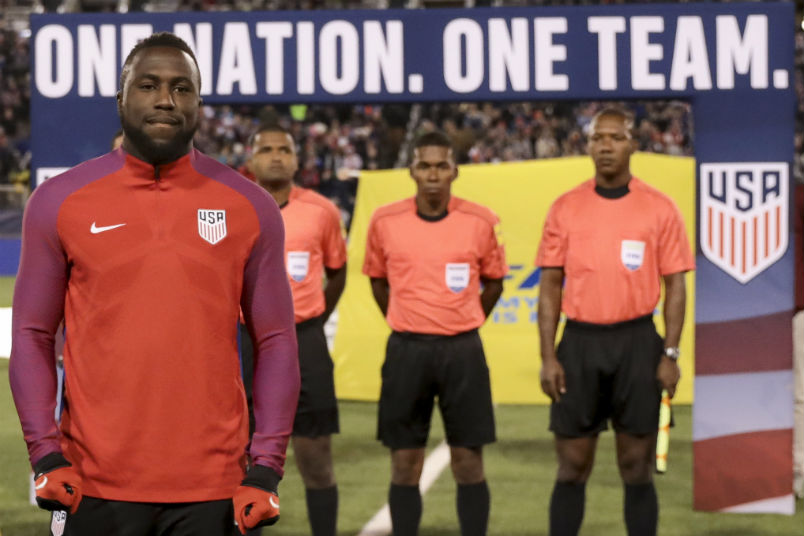 By Charles Boehm – WASHINGTON, DC (Mar 2, 2017) US Soccer Players – We’ve grown accustomed to the reality that professional athletes almost always have to watch their words or moderate their personalities to some extent when talking to the media. In US soccer the spotlight traditionally hasn’t burned quite as hot as in the country’s most dominant sports. There’s still usually significant risk and almost zero reward for athletes truly speaking their mind.

In this respect, Jozy Altidore has been through it all by this stage in his career, from World Cup mixed zones to the pressure cooker of big-time European club ball. He’s not generally known for giving lengthy or headline-ready soundbites, usually preferring to focus on the job at hand.

This week he stepped outside of that reputation, and by doing so has done the entire US soccer community an enormous favor.

The whole video is necessary viewing for anyone who cares about US soccer’s long-standing issues with inclusion and diversity – and the corrosive effects they’ve had, and continue to have, on the quality and competitiveness of our teams, players, and coaches.

“People try to sweep it under the rug, but racism is alive. It’s alive and well,” said Altidore when the topic of limited African-American representation among US coaches. “In all aspects of life you’re going to encounter it. It’s going to be there. And until that’s addressed on a greater scale, you’re always going to have these kind of instances. You’re always going to be talking about these type of things.”

“In anything – sports, soccer – black people are what, 500 years behind? People are always like, there’s not a lot of black people doing this, there’s not a lot of black people doing that. There’s a reason for that. Y’all had a head start… Racism is such a funny topic because white people love to tell you to get over it. ‘Stop grieving, stop complaining. Come on, we heard enough of that.’ No. You were hanging, burning, beating, raping black people 500 years. So when we’re ready to stop grieving, we’re going to let you know.”

The wide-ranging dialogue touches on some of the knottiest and most pressing issues at the grassroots of our game. It drives home the complex realities of life for players like Altidore and Williams. Both shared their own stories of rising through dominantly white youth soccer environments to reach the top of their profession amid myriad cultural and institutional obstacles.

Their experiences should serve as warning and road map alike for leaders who’ve long lamented the difficulty of reflecting the nation’s broad economic and ethnic spectrum in the upper reaches of the game.

“In America, soccer doesn’t represent the come-up, though, especially to the urban kid. It’s not the dream – making it out the ‘hood, getting that paycheck and buying momma a house,” said Altidore, the child of Haitian immigrants who sought a better life in South Florida.

“A lot of inner-city kids in America, they see sports also as an opportunity. Yeah they love it, but what can get me out the hood, what can get me a better opportunity? I think that’s also something that you have to overcome, that’s an obstacle for young soccer [players] in the inner cities…. Even if you want to chase that dream, in the hood you’re probably thinking there’s no end product here for me, in terms of taking care of your family forever.”

With real candor, Jozy reveals depths of character and awareness here that many of us in the media should feel embarrassed not to have tapped and celebrated long ago.

“I could be totally wrong, but you take LeBron [James] back to whenever he started playing sports, and he says ‘ma, I want to play soccer.’ She’s like, ‘nah, you’re not playing soccer,’” Altidore noted, sparking knowing laughter around the table. “Because there’s no model for him. Who would he have looked up to as a young black man trying to come up playing soccer… that is plastered [on advertising] everywhere, that makes the type of money that can change his life, that is an example? There isn’t one.”

It’s striking to hear this from a player often viewed as a uniquely American soccer success story. Conversely, it hints at what an iconic legacy Altidore and others of his generation are leaving for those who follow. Smalls underlined this by noting what a powerful message the USMNT striker can send – even when he’s not speaking volumes.

“To be real, Jozy’s interviews sometimes, the shortness and the curtness of it connects to a lot of people. We ain’t saying a whole lot,” chuckled Smalls, a Penn State gridiron star in his own playing days. “You want to touch and feel the players. What do they do? Bring their lifestyle into popular culture. Let [kids] see they’re not special, they’re not unique just to [the] national team… I want to see that [personality] part come out, because it’s here.”

In some ways, Altidore is taking a risk by touching on race and politics, third-rail topics to some. To this observer, it feels like a crucial and necessary one for the greater interests of both our soccer and our nation. From our national team’s aspirations to the future growth of the professional game to the very fabric of our society itself, the next steps will be nearly impossible to take without the full spectrum of our country on board.

“The country is so divided, in a way that a country like the US shouldn’t be, and that’s because we haven’t been listening to each other,” Altidore said. “We need to find a peaceful way to sit down and voice our differences. I know it sounds very cliched but it needs to happen, because things are going to get worse before they get better.”

“I think we live in the greatest country in the world – I think that 100 percent,” he added. “I represented this country since I was 17 years old. So I love it. But I think that conversation needs to happen. It’s a strong conversation, it’s an awkward one, but it makes for a better tomorrow.”