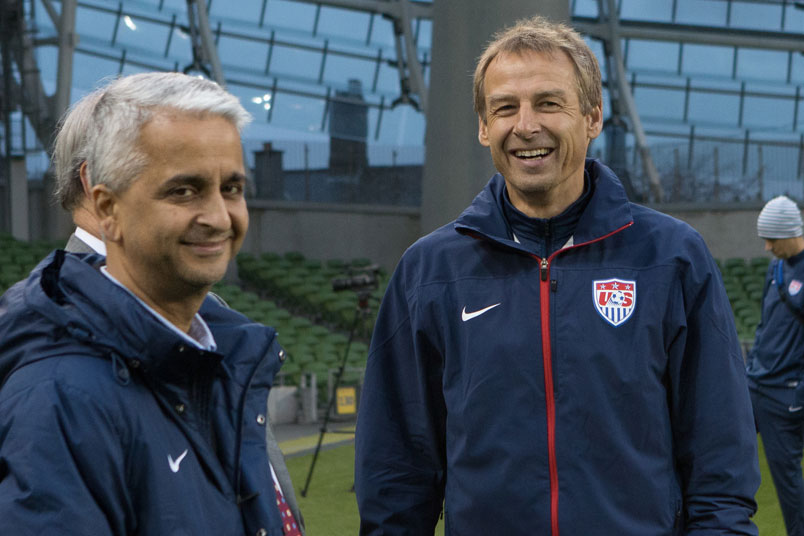 By Charles Boehm – WASHINGTON, DC (Mar 30, 2017) US Soccer Players – March’s World Cup qualifiers are over. The USMNT have banked four points from a potential six this month, meeting the coach’s stated goal. That’s restored at least some measure of calm to the process of qualifying for Russia 2018 from the CONCACAF Hexagonal.

Many observers have given in to the alluring temptation of blaming the team’s previous malaise entirely on the previous coach, Jurgen Klinsmann. Sure, there’s a kernel of truth or two in it. Klinsmann oversaw two costly, jarring losses. Bruce Arena arrives and he oversees two crucial positive results. November’s Hex losses to Mexico and Costa Rica were dispiriting disasters that capped a wider drift of more than two years, in retrospect only truly interrupted by a solid Copa America Centenario tournament.

Those of us who live in the nation’s capital, or pay attention to its political intrigue around this time every four years or so, can attest. It’s all too easy to blame the old regime when a new one takes charge. In fact it’s a double whammy. The replacements can both hog credit and deflect blame, depending on whether things are working or not.

It’s not unusual for things to go well. In soccer it’s known as the “new manager bounce”. When it happens, the predecessor only rarely gets a nod.

Writing for FourFourTwo last year, Simon Kuper called it “an ancient football myth: the new manager as Messiah”. He notes that “sacking the manager is a ritual, football’s version of the Aztecan human sacrifice. When the team does badly, he goes.”

The effect is somewhat deceptive, however. Such changes are usually made at a low ebb in performances and/or results. The law of averages tends to kick in sooner or later.

“Any statistician can predict what should happen after a low point,” added Kuper. “Whether or not the club sacks its manager, or changes its brand of teacakes, its performance will probably ‘regress to the mean’ – or in ordinary language, return to normal.”

In Klinsmann’s case, US Soccer Federation chiefs Sunil Gulati and Dan Flynn decided that they couldn’t afford to wait on that. Any continuation of the low ebb in the high-stakes environs of the Hex could lead to a calamitous failure to qualify at all. They had to interrupt the sine wave.

It may have been. ESPN’s statistical models now suggest that the Yanks face fairly favorable odds of reaching Russia. It’s also something of an existential commentary that all the Sturm und Drang of the past six months or so has only served to put the team at roughly the same place in those models as it was before the Hex began.

Arena and his players would likely admit that they rode their luck in Panama. We’ll have a clearer sense of Arena’s powers after June’s qualifiers against Trinidad & Tobago and at Mexico. That visit to Azteca poses a real threat of bringing the USMNT back down to Earth. Even at the best of times, CONCACAF’s long distances, varied climates, inconsistent playing conditions, and wobbly refereeing have a way of injecting a hefty dose of randomization into the proceedings.

In some ways the Honduras and Panama games, small sample size that they are, only serve to underline the enduring commonalities of the program under both coaches. Throw in the USMNT’s only other boss this century, Bob Bradley as well.

All three achieved historic, milestone-type results. All suffered bumps and bruises in the backyard. All mounted spirited attacks on the ramparts of the world elite, that upper crust that lives in the top 10 to 15 spots on the FIFA World Rankings, and were unable to maintain a foothold. All sought, with varying degrees of success, to improve the country’s creaky developmental infrastructure over the long haul while still vying for short-term results. All three departed by the US Soccer’s choice and not their own.

“From what I remember about CONCACAF qualifying, it hasn’t changed a whole lot in 12 years,” Arena said after Tuesday’s draw. “It’s just a battle. The referee wasn’t going to call too many fouls. It was a slugfest for 90 minutes.”

We Yanks badly yearn to speed up the evolutionary process and climb above the CONCACAF slop. Yet even a naturalized world champion and all-time great like Klinsmann was unable to sustain that higher cruising altitude for any great length of time.

Though an avowed innovator and disrupter of the status quo, Klinsmann eventually stayed long enough to become a manifestation of the institution. Just because he readily affirmed his own suitability for simultaneous duty as coach and technical director doesn’t mean it was a good idea to give him both jobs. The fact that USSF has subsequently divided the two roles – for now, at least! – is an open acknowledgment of that reality.

Here we are again. We’re back at the inescapable conclusion that few humans on earth are capable of running a truly effective national team program for more than half a decade or so. No matter how illustrious your coaching pedigree may be, the position carries built-in limitations of time, influence, and human behavior.

In retrospect maybe we shouldn’t feign surprise that it didn’t work out with Klinsmann in the end. Nor should we scapegoat him for running out of ways to reinvent his tenure. En route he’s helped show us the limitations of US Soccer’s longstanding obsession with internal stability.

Arena’s sole job is to reach Russia 2018 by nearly any means necessary, then produce the best possible performance in the tournament itself. He needn’t worry about even the vaguest of directives to “fix US soccer” and he almost assuredly won’t linger too far beyond next summer. It may make for a couple of ugly Hex games. Still, that clarity of purpose has already done him and his players a world of good. Let’s hope US Soccer remembers this lesson.