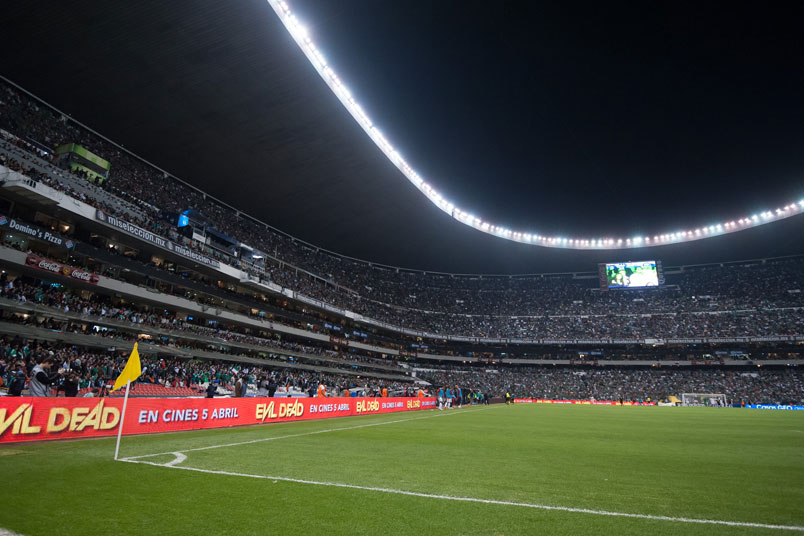 By Luis Bueno – RIVERSIDE, CA (Mar 22, 2017) US Soccer Players – For all the pressure and fear associated with World Cup qualifying, there is a rather simple formula for CONCACAF teams seeking entry to the world’s biggest sporting spectacle. Take care of business at home.

It’s a tried-and-true formula, really. Win at home, steal a few points from away games, and start dreaming. Mexico has mostly followed this formula all the way to the World Cup. It’s now on El Tri to get back to its former glory at home in order to see its way through to Russia 2018.

Mexico opens its home slate in the final round of World Cup qualifying on Friday when Costa Rica visits Estadio Azteca. Sitting on four points through two matches, Mexico is in a rather comfortable position already. They’ve fulfilled part of the formula necessary for entry to the World Cup.

For Mexico though, the match against Costa Rica is more than just taking over the top spot in the Hexagonal table. It is about re-establishing its home dominance. That’s something looming large over the rest of CONCACAF. It helped establish Mexico as a regional power. Whether or not that is still possible is the question.

The luster is certainly off the once-feared Azteca which four years ago quickly turned into a bit of a relic. Estadio Azteca was once a fortress. After 2013 it may as well have been the moden-day version of nearby Teotihuacan. Ruins of an ancient civilization that while still impressive does not instill fear into visitors as it once did.

Fear used to be evident from the start of matches. Azteca was the house of horrors for the rest of CONCACAF. Perhaps the high point of that was the 1993 Gold Cup, when a team of upstart Americans lost 4-0 to Mexico in a match that nearly suffocated the Americans, literally. Players were short of breath in the high-altitude smog-filled thin air of Mexico City.

Mexico had no issue with those sorts of conditions. No matter who lined up on the other side, Mexico players had so much confidence and arrogance at Azteca that they were nearly invincible. Mexico beat Brazil in the 1999 Confederations Cup final there in what was one of the biggest home wins Mexico has ever had.

Costa Rica eventually stunned Mexico in the so-called Aztecazo, beating El Tri by 2-1 in World Cup qualifying in 2001. That was just a blip. Mexico won four qualifiers there in the rest of the Hexagonal to get into the 2002 World Cup. They won three out of three matches in Azteca during qualifying for the 2006 World Cup. Add another seven combined in the run-up to South Africa 2010. Even though Mexico fired coaches in 2001 and 2009 , Mexico was never really out of it. That was in large part because of the comfort and nearly-guaranteed points Azteca offered.

Things can change quickly. Jamaica held Mexico to a scoreless draw in the Hexagonal on February 6, 2013. Then the Americans pulled off their second-ever scoreless draw at Azteca, on March 26 followed by Costa Rica’s scoreless draw on June 11. Honduras beat Mexico on September 6 to nearly slay the dragon, but a late win over Panama at home on October 11 kept Mexico with a pulse, one that eventually strengthened as Mexico beat New Zealand in a play-in series to reach Brazil 2014.

Mexico finished the 2013 Hexagonal with a 1-1-3 record, scoring three goals and allowing three goals. Three goals in five games is laughable considering Mexico used to get that in 45 minutes without much effort during the height of their home dominance.

The soccer world has changed much though over the last few decades. Mexico too has grown. European-based footballers now line up for El Tri as opposed to a fully domestic side in the 1990s and early 2000s. That evolution has not borught with it a sustained level of play at home.

Because of that growth from other nations, visiting teams no longer fear the Azteca. If they do, it certainly doesn’t show in their play. As recently as September a visiting side held Mexico scoreless there as Honduras and Mexico played to a nil-nil draw in the final match of the fourth round of qualifying. While that match meant little to the already-qualified Tri, it helped boost Honduras’s confidence. It also showed that Mexico cannot just show up at the Azteca and pull away with a comfortable victory.

Those days are gone. Mexico must work hard for results no matter the location. That work has already paid off. Mexico beat the USMNT in November to start qualifying off in style, then escaped Panama with one point after a gritty scoreless draw. Before, that would have been plenty to see El Tri through to the World Cup. Four points plus 15 from five home matches would give Mexico 19 points, more than enough to finish in the top three.

Now, that is not the case. A slip-up at home would be a setback. Costa Rica has six points through three matches. The win in Azteca in 2001 may be ancient history but not to the Ticos. They love to relive that game. It’s easy to draw inspiration from one of the greatest footballing moments in that country’s history.

Costa Rica may draw inspiration from a match 16 years ago. If Mexico cannot overcome its home failures, the rest of the region will need only look to March 2017 for continued inspiration and hope in Mexico’s four remaining home fixtures.