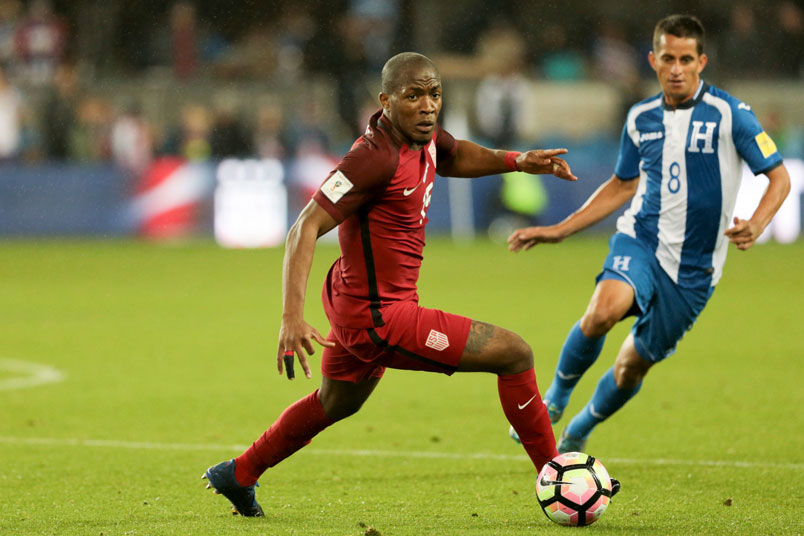 By Clemente Lisi – HARRISON, NJ (Mar 27, 2017) US Soccer Players – You may have spent the past few days enjoying the bevy of World Cup Qualifiers available during the international window. You may have even found your way to San Jose to witness the USA’s 6-0 romp of Honduras Friday night. The marathon of World Cup qualifiers from across the globe as teams fight for spots at Russia 2018 produced plenty of compelling games and lots of wonderful goals.

If you are an MLS fan, however, there were games on the schedule. The biggest leagues in Europe took the weekend off, Major League Soccer – impervious to the FIFA calendar and international dates – moved right along as if nothing was different. That’s been the case since the league started in 1996.

The MLS schedule wasn’t as packed as it usually is. There were only three games, all played Saturday. There shouldn’t have been any. I’m not asking for MLS to move to an August-to-May schedule like Europe’s major domestic leagues, but it should try abiding by the international window.

Under FIFA rules, club teams have to release players called up for National Team duty. While MLS has been better about scheduling fewer games on those days in recent years, it doesn’t completely shut its doors. MLS has argued that its spring-to-fall schedule hinders its ability to go completely dark. The league has made exceptions. It typically takes a two-week break during the World Cup group stage. Last year, MLS did not play games during the group stage of the Copa America Centenario. This summer, for the first time, it will do the same during the Gold Cup.

Ironically, the FIFA window MLS respects is the one each November, which takes place during the MLS Cup Playoffs. In ESPN’s annual anonymous player survey, released earlier this month, 68% of players said the postseason lasted too long to maintain momentum – and that the international break didn’t help matters.

“The FIFA breaks. … It’s too long and drawn out, and I think you lose momentum in the communities; the players lose slight momentum,” said one player quoted by the survey.

The issue was very apparent Saturday afternoon, when some fans took a break from the overabundance of games on TV (how badly did you really want to see Luxembourg-France?) to catch a match in person. In my case, it was the one-hour train ride from my Manhattan to the Jersey suburbs to see the Red Bulls host Real Salt Lake. This matchup had lots of storylines. RSL came into Red Bull Arena without its coach Jeff Cassar, fired earlier in the week after just three games. In his place, temporarily, was goalkeeper coach Daryl Shore at the helm. As for the Red Bulls, the team’s loss to Seattle the previous week on the road snapped an 18-game regular season unbeaten streak that had stretched back all the way back to July 2016.

Instead, what we got was a mediocre game from two teams missing their best players because of international duty. In other words, the players not there were the bigger story rather than the ones who took the field. Both lineups were beset with absences. The Red Bulls were missing key players such as playmaker and captain Sacha Klejstan (USA) as well as defender Michael Murillo (Panama) and forward Derrick Etienne (Haiti). Meanwhile, RSL – already crippled with injuries – was without starting goalkeeper Nick Rimando and midfielder Albert Rusnak (Slovakia).

Without Klejstan, New York’s offensive failed to get it done. The team had three clear chances on goal but the game ended scoreless. Red Bulls coach Jesse Marsch, not one to mince words, was not happy about having to play without one of his best players.

“I don’t like it. I don’t understand it,” he said. “These are things for you to ask the league. There are often things that I don’t quite get. But in the end, it’s OK because it gives us a rhythm right now of playing games. Yes, I’d much rather have both teams be able to have their full complement of players.”

This is not a new problem. Last August, FC Dallas, the team with the most points in the league at the time, and the Portland Timbers, the reigning MLS champions, played each other – even though both teams were missing players due to the international window. Dallas was without four starters. Portland could not field three. A game between two great teams during a crucial juncture of the season should not have happened without their best players.

The Timbers suffered a similar fate Saturday night during its road game against the Columbus Crew, a rematch of the 2015 MLS Cup Final. Portland’s midfield was in tatters due to the absences of Darlington Nagbe (USA) and David Guzman (Costa Rica). The result was a 3-2 Crew win. The previously undefeated Timbers had gone 3-0 going into Saturday’s game, the best start to an MLS campaign in team history. For sure, Nagbe’s presence would have helped the Timbers.

This issue will continue to be a problem as MLS attracts more and more quality foreigners and as the US National Team increasingly comes to rely on domestic-based players. MLS lets its product on the field suffer along with expecting fans to pay good money to cheer on their beloved teams. Is this the type of soccer MLS wants to market to a broader sport audience? Apparently, since they continue to insist on playing through the international windows.