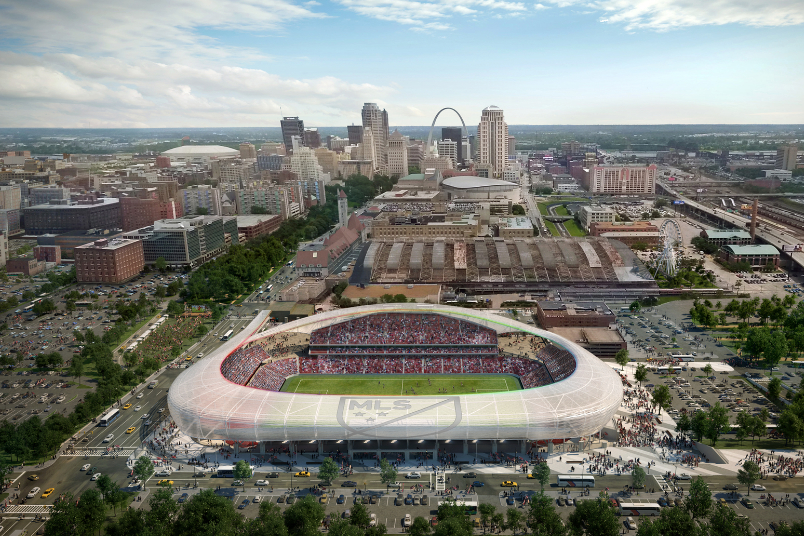 By Clemente Lisi – NEW YORK, NY (Mar 13, 2017) US Soccer Players – MLS is growing each year. The league’s 22nd season opened this month with 22 teams, more than the top flights of England, Germany, Spain, and Italy. Next year, Major League Soccer will add another franchise in Los Angeles when LAFC takes to the field. It doesn’t stop there. There are 12 other markets looking to get in on this country’s soccer boom. While each city can stress its history in pursuit of an MLS team, St. Louis stands out above the rest.

Minnesota and Atlanta joined the league this year. Both have roots that go back to the days of the original North American Soccer League. There are others that want in on the fun. The 12 prospective ownership groups that have also submitted bids to MLS in addition to St. Louis are Charlotte, Cincinnati, Detroit, Indianapolis, Nashville, Phoenix, Raleigh/Durham, Sacramento, San Antonio, San Diego, and Tampa Bay.

The league has said it will choose two cities this year (who would start play in 2020) and two others at an unspecified later date. Based solely on tradition and past results, St. Louis deserves entry into MLS. The city’s rich ties to the game run long and deep. Of course, the construction of a soccer-specific stadium, what plans are in place to fund a venue, and whatever government hurdles may be present is something MLS needs to look at before making a final decision. It shouldn’t, however, get in the way of St. Louis’s bid. If New York could get a second team without a stadium, why should that stop St. Louis?

“Long before it was hip to attend soccer games and follow local teams, St. Louis knew the importance of the world’s game and in turn had the players to be able to formulate its own version of the one true ‘world’s sport,’” said Bill McDermott, a St. Louis native nicknamed “Mr. Soccer” for his decades-long involvement in the sport. “The St. Louis soccer public does not and has never needed a primer on soccer education,” he added. “If pro soccer is to play a part of the national sports landscape, it’s only logical that one of the sport’s absolute prime movers play a part.”

The game’s roots date back in St. Louis to the 1870s. Founded in 1907, the St. Louis Soccer League was the US’s only pro league in its day. Every team the US has sent to the World Cup since 1930 has included at least one player from St. Louis on its roster. The National Team that stunned England 1-0 at the 1950 World Cup had five starters – goalkeeper Frank Borghi, defender (and captain) Harry Keough, midfielder Charlie Colombo, and strikers Frank Wallace and Gino Pariani – who hailed from St. Louis. As a footnote, the only American journalist at that World Cup was Dent McSkimming of the St. Louis Post-Dispatch.

In the 1970s, the Cosmos may have been the highlight of the NASL’s boom years, but the St. Louis Stars also made a name for themselves. Unlike the Cosmos and its legion of foreign players, the Stars had a high number of American players – many from the St. Louis area like National Team star Al Trost. In 1978 the Stars moved to Anaheim and became the California Surf.

After the NASL folded, the city continued to rally around a team. Fans cheered the St. Louis Steamers of the Major Indoor Soccer League. From 1979 to 1988, the team played at the

“The Steamers were successful due to the grassroots support, and soccer knowledge of the St. Louis community, and to the fact that 80% of the team was native St. Louis players, many with international experience,” recalled Ty Keough, a former US midfielder who was also a member of the US Olympic team.

St. Louis has been the place where many of the game’s legends have been both born and achieved greatness. Trost, for example, played for St. Louis University and helped the school win the 1969 and 1970 NCAA titles, where McDermott was also a player. Trost would go on to play for the National Team throughout much of the ‘70s. Like Harry Keough, Trost served as US captain. Other past National Team captains from St. Louis have included Bobby Kehoe and Steve Pecher.

McDermott is another example of how committed St. Louisans are to the game. Now in his 45th year, McDermott is the longest-running US soccer broadcaster. He’s reported on every World Cup since 1970 and done both radio and TV work. Along with Phil Schoen and Ty Keough, he was part of the original crew that broadcast ESPN games when the league started in 1996.

McDermott said SC STL – the group trying to bring a pro team to his hometown – is “one of the most rock-solid investor/ownership groups” to submit an application to MLS. The group includes Paul Edgerley, a minority owner of the NBA’s Boston Celtics and Jim Kavanaugh, owner of the USL’s St. Louis FC as well as former Anheuser-Busch president Dave Peacock.

“They fulfill the main requirements of the league for expansion status – a group well respected not only in soccer tradition but business pedigree as well, a viable stadium plan in the downtown area, a thorough foundation of the youth academy-PDL-USL dynamic and an extremely well-educated soccer audience that is totally immersed in the sport,” McDermott said.

Like with other bids, a decision on a soccer-specific stadium will rest with the voters. Voters will decide the fate of a proposed $200 million venue in downtown St. Louis on April 4. That ballot measure will determine whether the city should put $80 million towards the project. It comes at a time when cities have been reluctant to bankroll stadiums. Missouri Governor Eric Greitens, for example, is not a fan. He’s referred to the proposal as “welfare for millionaires.”

Should St. Louis fail to win a franchise, there are places like San Diego that could benefit. Keough, who also played for the San Diego Sockers, said the California city’s love affair with the game is recent. He said the Sockers were largely embraced for its ‘80s MISL domination. Asked about the differences with St. Louis and whether San Diego should also get an MLS team, Keough was diplomatic.