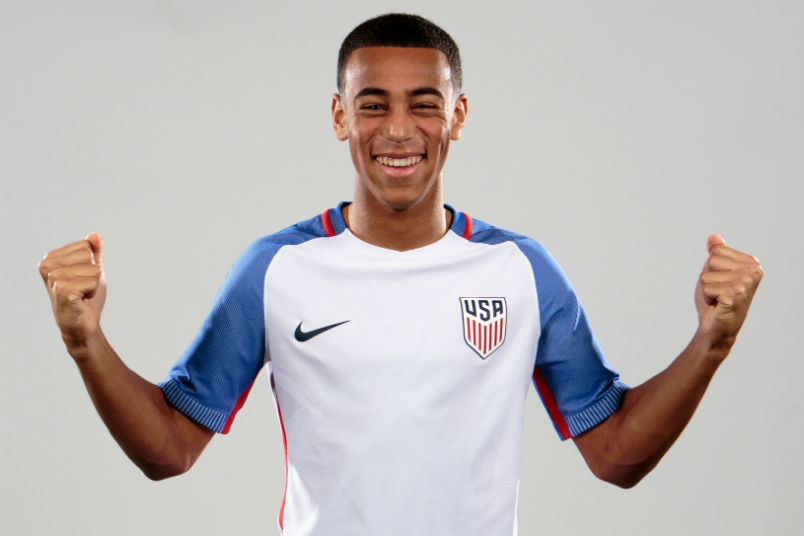 By Jason Davis – WASHINGTON, DC (Mar 3, 2017) US Soccer Players – The USMNT plays El Salvador at the CONCACAF U-20 Championship in control of its route to the U-20 World Cup. Tab Ramos’s team started the tournament slowly with a 1-0 loss to 10-man Panama. They turned things around by taking care of business against two minnows and beating Mexico in a competitive match at the U-20 level for the first time in 31 years.

There are a number of senior professionals in this year’s U-20 team. As America’s talent development systems have evolved. The number of players eligible for U-20 duty who are already attached to pro clubs has risen dramatically. What once was a team made up almost entirely of college players is now dominated by players already collecting a paycheck to play soccer.

There’s a foreign-based contingent in Ramos’s team, with four players attached to clubs outside of the United States. Most of the pros, however, are with MLS clubs. That means an exciting group of potential future stars will be returning to the league at the conclusion of the CONCACAF Championships, either to reclaim their starting spots or to fight for minutes.

Here at six U20 names who we’ll be seeing a lot of on MLS fields soon.

Palmer-Brown’s versatility, and a dearth of options for Tab Ramos higher up the field, pushed the Sporting Kansas City man into a deep-lying defensive midfield role during the CONCACAF Championships. Palmer-Brown was one of the heroes of the US win over Mexico. His defensive abilities and athleticism were key against a side that desperately wanted to build through the middle of the field.

Despite Palmer-Brown’s positional shift at the international level, the expectation is that he’ll slot into the Sporting lineup on a regular basis at center back sometime in the very near future. After a season on loan to Porto last year, Palmer-Brown looks ready to become the anchor of the back line for his hometown team.

Another hero of the Mexico game, Adams recovered quickly from an injury he suffered against Panama to lead the way in the midfield for the US against El Tri. Red Bulls fans got to to see their prized prospect doing a masterful job of smothering the Mexican attack. Adams’s arrival into the first XI for the Red Bulls hasn’t exactly been a long time coming (mostly because of his age), but that doesn’t mean the faithful aren’t anxious to see what the kid can do in MLS.

Adam may have to share minutes, both because of his inexperience and because Red Bulls coach Jesse Marsch will need time to sort out the best chemistry in a midfield without Dax McCarty. Sean Davis should get the lion’s share of the time alongside veteran Felipe. If Adams shines in the opportunities he’s sure to get, Marsch might hand Adams the full-time job.

Technically, the 19-year old Lennon is a Liverpool player, on loan to Real Salt Lake for the 2017 season. Lennon jumped to Liverpool in 2015 after starring in RSL’s academy as an underage player. That means if he makes real progress as a member of RSL in 2017, his club future is likely to be on the other side of the pond.

An option in several positions for head coach Jeff Cassar, Lennon figures to be a part of the rotation in the attacking end as the season plays out. He isn’t as certain to play significant minutes as some of his U-20 teammates when they return to MLS, but Lennon’s talents will be hard for Cassar to ignore.

A teammate of Lennon at Real Salt Lake, Glad will head back to Utah at the end of the tournament expecting to slide into the starting lineup. A revelation at center back as a teenager last year, Glad is one of the brightest young defenders in the league and is already trusted by Cassar to handle difficult assignments week-to-week.

Glad is still learning his craft, but he already possesses enough size and speed that the learning curve hasn’t been too steep. The relationship he formed with teammate Aaron Maund in front of Nick Rimando helped the club navigate the trade of Nat Borchers in 2016 and Chris Schuler’s injury issues.

Lewis joined NYCFC as a draftee after one year of college soccer at Akron. His Generation Adidas status speaks to his potential, which was big enough Patrick Vieira and company decided the Florida native was ready to step into the spotlight for one of the league’s most ambitious teams. NYCFC traded up to the third pick in the SuperDraft to nab Lewis.

Lewis’s most obvious trait is his speed. At Akron, he manned the wing, contributing 12 assists and two goals in 22 matches. With his speed, Lewis can blow by defenders. With his smart passing eye, he can find teammates on late runs with well-weighted balls. Lewis will have to fight for playing time against the likes of Tommy McNamara, Jack Harrison, and Miguel Camargo.

Like RSL’s Glad, Redding earned his way into an MLS lineup as a teenager. Now 20, the Orlando City central defender will enter 2017 as part of a group that will all see significant time under head coach Jason Kreis. The athletic Redding made 16 starts for the Lions in 2016, While it won’t be easy for him to reach that number again, Kreis knows he can turn to his young charge if needed.

Redding will benefit from playing in a team with veterans like Jonathan Spector and Jose Aja, both of whom joined this winter to beef up the Orlando City defense.