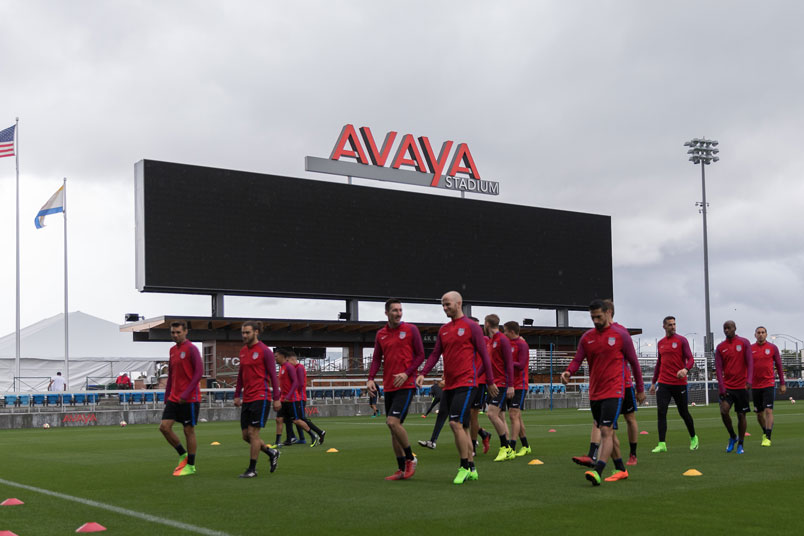 By Charles Boehm – WASHINGTON, DC (Mar 23, 2017) US Soccer Players – Experience, aggression and commitment are the tools of choice for the USMNT as they wade into a pressure-packed World Cup qualifying encounter with Honduras at Avaya Stadium in San Jose, California on Friday (10:30pm ET – FS1). The high stakes of this match, brought on by November’s back-to-back losses to Mexico and Costa Rica, isn’t news. It’s a “must-win” in every sense but the literal, statistical one. Given recent events, anything but victory will leave nerves shredded.

“We understand the position we’re in,” US captain Michael Bradley told the media in San Jose this week. “There’s no need for anybody on the outside to put any more pressure on us than we’ve already put on ourselves. Because we didn’t start the Hex in the right way, we put ourselves behind the 8 ball. We’re honest and real enough with ourselves to understand that.”

The USA’s slow, hard climb from World Cup neophytes to perennial participants over the past quarter-century builds on winning home qualifiers like this one. They’ve only lost two such games on 51 occasions since 1985, in fact. Mexico’s stunning win in Columbus last fall was one. A 3-2 loss to Honduras at Washington’s RFK Stadium in 2001 was the other.

Bruce Arena was in charge of the Yanks on that frantic day at RFK 16 years ago. Friday marks the first competitive match since his return to the job in place of Jurgen Klinsmann. He’s called in a squad with ample background in these moments. He’s pledged an assertive, attack-minded approach against a Catrachos side likely to mass their defensive ranks. Arena’s famously healthy ego becomes particularly useful in this situation. He’s surely doing his best to infuse both urgency and belief in his charges.

“Bruce is going to rely on guys who are going to step on the field in big moments and go for it and be aggressive and be fearless and represent him and the team and our country in the best possible way,” Bradley said. “Experience counts for a lot in games like this.”

Said defender Geoff Cameron: “The pressure is on us, but we’ve been here, we’ve dealt with it before and I think we’re confident going into Friday night. We’ll try to go out there, high-pressure them and dictate the pace of the game.”

Arena has made fairly clear that he sees more talent to work with now than he had back in his first stint in charge, from 1998-2006. He has boldly and publicly charted a bullish course to Russia 2018, starting with four points from this month’s two games. Yet a sudden injury outbreak has swept across his player pool in the past week or so, complicating the first task on the list. Likely starters like Bobby Wood, Fabian Johnson, and DeAndre Yedlin are not available. Jordan Morris is nursing an ankle knock. Jermaine Jones is is serving a suspension due to yellow-card accumulation.

Still, there’s ample competition for the minutes on offer. The goals and expectations remain the same.

“It’s not as cavalier as ‘next man up,’” assistant coach Dave Sarachan said. “But we’re so confident in the depth of this pool that you can go to the next guy and just feel like maybe it’s not exactly as it might have been, but it’s still at a point where we can get the job done. We have a lot more options and this is a group that understands where we are and where we’re going.”

Where is Cameron best used: at center back, in the partnership with John Brooks that worked so well last summer, or at the right back slot vacated by Yedlin’s injury?

Is Clint Dempsey ready for major minutes after months away from international play due to an irregular heartbeat? Or from another angle: Given his history of clutch USMNT outings and sharpness in MLS play, can Arena afford not to start him?

Who will partner with Bradley in central midfield? A diverse array of candidates includes Kellyn Acosta, Alejandro Bedoya, Sacha Kljestan and Sebastian Lletget.

What’s Arena’s formation choice for the whole thing: a 4-4-2 with a strike pair up top, or a 4-2-3-1 or similar with more of a solo spearhead? Jozy Altidore will almost certainly lead the line in either case.

Traditionally a rugged, flinty side, Honduras would be more than happy with a point. They’re 2-12-3 all-time against the US on US soil, after all. They will test the Yanks with physicality, gamesmanship and counterattacking. Several of their key players are MLS regulars, giving them familiarity with their opponents and in most cases, solid form and rhythm heading into this encounter.

The USMNT have no illusions about the bare-knuckle task at hand.

“We’re trying to execute our game plan,” said Chris Wondolowski, the San Jose Earthquakes hometown favorite called in for frontline depth. “There’s not going to be any beauty prizes awarded. We’re going to have to grind out those three points.”