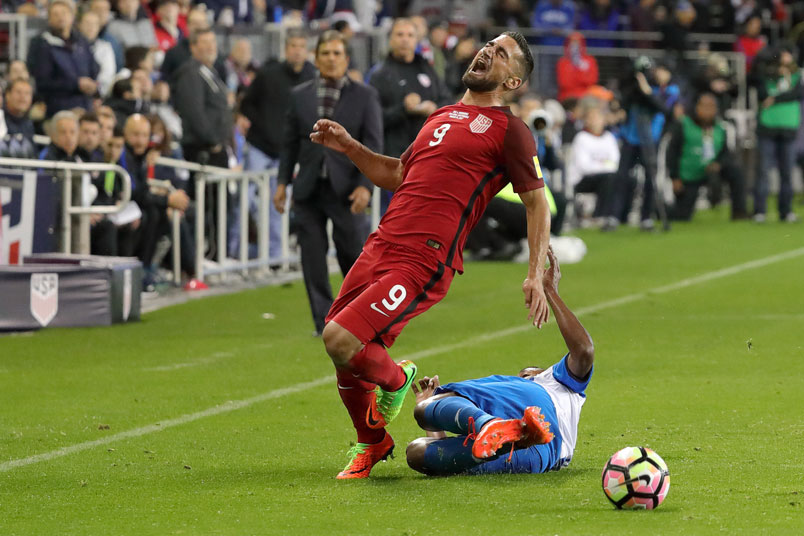 By Jason Davis – WASHINGTON, DC (Mar 28, 2017) US Soccer Players – The LA Galaxy announced on Tuesday that 24-year old midfielder Sebastian Lletget would miss the next 4-6 months. He needs surgery to fix a broken bone in his foot. Lletget picked up the injury while on duty with the USMNT, for whom he made his competitive debut on Friday night against Honduras.

Lletget scored the opening goal in the 6-0 romp, but exited just few minutes later with the foot injury. Initially thought to be a mild setback, further tests on Monday revealed the more serious nature of the problem.

It’s a small tragedy to see Lletget eliminated from consideration for both the Galaxy and the USMNT for so long a period. Lletget had only just established his international credentials. He pushed his way into the team with his excellent work for the Galaxy in 2015 and 2016. It wasn’t that long ago that Lletget was nearly done with soccer. His experience coming through the West Ham United system in England had soured him on a pro career. He considered retiring prior to landing in Major League Soccer.

Bruce Arena had a hand in Lletget’s arrival in LA. As the USMNT boss, he gave Lletget his first start as a member of the national team. The former Galaxy head coach knows better than anyone what Lletget can do for the USMNT. Now, Arena has to look elsewhere.

As for the Galaxy, there are players in line to help replace Lletget there, too. Which of them head coach Curt Onalfo chooses to to lean upon is up in the air. All of the options are young and unproven, but with a healthy dose of potential. In 2015 and 2016, Lletget played largely in the middle as part of the central midfield under Arena. This season, he moved out wide.

In a lot of ways, this situation is what the MLS partnership with USL is all about. The Galaxy were early adopters of the second team concept in USL. The club used LA Galaxy II as a place to give up-and-coming players time in competitive matches, rather than have them wasting away on the senior team’s bench.

Among that group are names like Jose Villarreal, Bradford Jamieson IV, and Raul Mendiola. Emmanuel Boateng also figures to get some time on the wing more consistently.

Villarreal is a player with a fascinating history. He was once the crown jewel of the Galaxy academy system. LA signed him to a Homegrown Player contract and expected him to contribute immediately. After making a brief splash with the first team, his minutes dried up and he began looking for other opportunities.

A loan to Cruz Azul proved to be fruitless. Villarreal never managed first team minutes in Mexico. His returned to the Galaxy in 2015, and has spent the last two season honing his game at the USL level. The opportunity has now come for Villarreal to prove that the “Los Dos” project can deliver. Villarreal is more comfortable at forward than out on the wing, so he’s not the most obvious replacement for Lletget, but there should be some time for him.

Bradford Jamieson IV is a lithe, quick, dynamic young attacker with a bright future. Whether that future begins now in earnest depends on Onalfo’s trust in a homegrown signing with just a few MLS appearances under his belt. Jamieson has started the season with LA Galaxy II in the USL, but the senior side could come calling with the injury to Lletget. He’s not ready-made as a like-for-like replacement for Lletget, especially as it relates to the defensive side of the ball. However, he does provide Onalfo with an attacking tweak that could be interesting to watch.

Mexican attacker Raul Mendiola might be the man most ready to step into the fray. Coaches around the Galaxy setup rave about his vision and technical ability, and he’s got the defensive chops to work in an MLS lineup. Onalfo is not going to want to sacrifice stability on the wing for a player who is only interested in going forward, something that plays to Mendiola’s advantage.

The Galaxy are on the verge of getting Gio Dos Santos back from injury. Gyasi Zardes is already back in full training after recovering from knee surgery. Both of those additions will help a team that has struggled to create chances in recent weeks. They will improve the quality of the Galaxy lineup by a significant margin, even if it takes more time for Jermaine Jones to fully settle into the midfield and for someone to grab a chance to make a mark at the forward position.

If the Galaxy are truly committed to a new approach to building a championship-caliber team, one that relies less on famous names and more on the talent coming out of Southern California, the time to prove it is now.