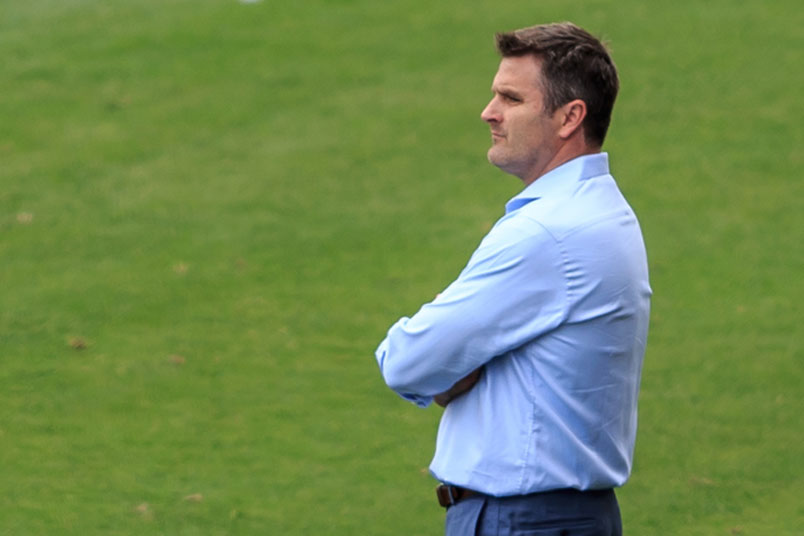 By Luis Bueno – RIVERSIDE, CA (Apr 5, 2017) US Soccer Players – When the LA Galaxy hired Curt Onalfo as coach, the move seemed to be a reassuring one. The club valued stability. Having someone who knew the ins and outs of the LA Galaxy was seemingly a smart move.

The offseason coaching shakeup that led to Bruce Arena vacating the post and Onalfo’s subsequent hire seemed to take the focus off some more deep-rooted issues. Now, those issues are threatening to send the Galaxy to its worst season since the Ruud Gullit days.

One month into the 2017 MLS season and the LA Galaxy is on the brink of disaster.

Consider the Galaxy’s plight: the club has fewer points than expansion Minnesota United, a club that seems to have little sense of what it means to defend and is threatening to smash dubious records such as “most goals allowed” and “fewest wins” in an MLS season.

What has led to this precarious situation has been a slow process that is surfacing now as the club struggles to stop opponents from scoring goals. What Onalfo offers is exactly what the roster lacks – stability. There has been little stability within the Galaxy roster over the last three years.

For a team that prides itself on championships, any talk of such aspirations this season will be silly and unrealistic. Sure, anything can happen in MLS, a league where the inane playoff system renders the regular season all but meaningless. However, this LA Galaxy squad has deep problems. One or two roster moves won’t fix things. The bail out offered by merely making the playoffs in this league won’t be enough.

This changeover process will take some time, and will certainly cost the Galaxy the 2017 season.

It may not seem too long ago that the Galaxy was dominating MLS and collecting silverware left and right – MLS Cups, Supporters Shield titles, individual awards. Those days are firmy in the past along with the Rose Bowl and the Sigi Schmid era. Only one player remains on the roster who was with the club in 2011 – Jack McBean.

The only connections to the 2014 MLS Cup-winning side? Baggio Husidic, Gyasi Zardes, Robbie Rogers, Rafael Garcia, Raul Mendiola, and McBean. Zardes is a key player, someone that must contribute if the club is going to succeed. Otherwise, it’s a list filled with role players.

The players who should be key contributors on the field and leaders in the locker room have arrived recently. Gio Dos Santos signed midway through the 2015 season. Jelle Van Damme and Ashley Cole joined in 2016. Jermaine Jones and Romain Alessandrini have been around only since this year.

The leaders from the cup-winning teams from early this decade are now spread out over the league. Juninho and Omar Gonzalez moved following the 2015 season but Juninho returned to MLS for this season. Sean Franklin went to DC United before the 2013 season. AJ DeLaGarza moved to Houston before this season.

Aside from Juninho, the Galaxy drafted those players and used the players’ growth to help build the team into a contender and then a champion.

Recent reports though continue to threaten the team’s outlook. Rumors link the Galaxy with a move for Manchester United star Zlatan Ibrahimovic. While the talented Swede would fill stadiums across the league and force non-MLS fans to pay attention to the club and the league, he would only add to the problem. The Galaxy needs a stabilizing force on the roster to emerge, not a potentially destabilizing and expensive distraction to arrive.

Ibrahimovic would score goals but scoring goals is not a problem. The Galaxy scored twice in a loss at Vancouver on the weekend. Alessandrini bagged both and looks like he will be a strong attacking player in this league. Zardes is only three years removed from a 16-goal campaign. At some point, Dos Santos may contribute. The Mexican international is certainly capable of dominating games. Supporting players like Emmaneul Boating and Jack McBean should contribute to the attack.

Defense is the problem. The slow but comprehensive roster turnover affected the defense the most. Van Damme is a rock defensively but has little support. Cole is effective when he is not injured. Youngsters like Daniel Steres, Dave Romney and Nathan Smith might be good in time but are not good enough now to guide this team to the playoffs. The Galaxy may have lost this season with DeLaGarza’s move to Houston.

To contend for championships the way Galaxy executives expect, it takes time. The Galaxy acquired Landon Donovan in 2005 and instantly won a title but the team did not build the culture that would lead to more until 2011. Even with both Donovan and David Beckham, it took time to establish that culture. The Galaxy learned the hard way that simply having talented players on the roster was not enough to win. The club’s 2008 season was rock bottom, the only saving grace being that such depths brought about Arena’s hiring.

Now, the Galaxy must also turn to its head coach for a bailout. Onalfo needs to pull the right strings to steer the ship back in the right direction. A 1-3-0 record after four matches is not the start he expected, but now is the time for the Onalfo to show his mettle. Four of the next five matches are at home. Two of those matches – against Philadelphia April 29 and Chicago May 6 – are against teams that missed the playoffs a year ago while the first opponent is a Montreal side that has been inconsistent and is missing star Ignacio Piatti.

Nothing short of 10 points from this next stretch should be acceptable. However, it is unlikely for a team with as many short and long-term problems that the Galaxy has accumulated to expect such a haul.

For the Galaxy, 2017 will be what it looks like to see the mighty fall.