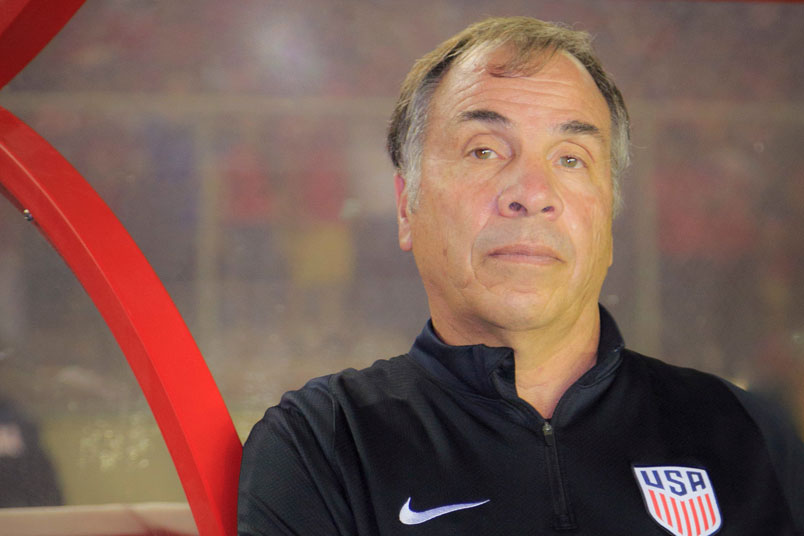 By Charles Boehm – WASHINGTON, DC (Apr 14, 2017) US Soccer Players – Bruce Arena held a conference call with select members of the media on Thursday. Surprisingly enough, the man put in charge of the USMNT as the proverbial “safe set of hands” managed to make headlines for an unexpected reason.

With another set of World Cup qualifiers on the horizon and the news of the US Soccer Federation’s joint 2026 World Cup hosting bid fresh in the news, Arena had plenty to talk about. The soundbite that got people buzzing was this one:

There’s actually even more to unpack here than it first appears. Yes, Arena’s known for speaking his mind without worrying too much about what anyone else will think of it. Still, he doesn’t often show interest in conjecture and prognostication. Intentional or not, he managed to pile up a double helping in one fell swoop here.

His assertion rides heavily on the idea of American soccer at large being on, and staying on, a steady upward trajectory that will at long last put the program into the rarified air of the game’s global elite. That’s a spot we’ve been aiming at for two decades or so, with measurable but very modest signs of progress.

Arena – who is highly unlikely to still be prowling a federation technical area in 2026 – is not only suggesting that the USMNT could win a world championship within this decade. He also:

In light of the many consequences predictable and not-so-predictable that naturally follow from these points, I’m tempted to ponder what sort of plot is afoot here. Why is Arena firing off this potshot mortar round in the midst of an ongoing qualifying campaign that he admits, in practically his next breath, is anything but on course?

It’s also important to note that Arena’s concession of ambition about the next two World Cups, even if implicit, is getting a different reception than the furor that greeted his predecessor. Jurgen Klinsmann bluntly stated that the USMNT were not going to win Brazil 2014 in the run-up to that tournament. Criticized as a fatalist, he subsequently took pains to backtrack, later even claiming that he’d booked his plane ticket home for a flight after the cup final.

There is a vocal subset of US soccer observers crying foul at this, detecting a double standard for a familiar old (domestic) hand like Arena compared to Klinsmann’s perceived “otherness” or “outsiderness.” The conspiracy theories may lose some steam by applying basic context, mind you. Anything said years before a major event, even by a head coach, is always going to pack less of a punch than remarks uttered on the eve of a tournament.

I suspect that Arena – whose nature is far from the starry-eyed optimism that his bold prediction would seem to suggest – is being a bit disingenuous here. He knows whatever happens in 2026 won’t be on him. He might, however, see value in firing up the base, to borrow a political term, and possibly lighting a fire under his federation colleagues in the process.

It’s strange to ascribe urgency to a prediction made about an event nearly a decade away. But it’s valid here, given the fits and starts of this nation (and other ascendant ones like it) at the world’s most popular sporting spectacle. While results at knockout tournaments are always prone to randomness. Yes, technically anything can happen at “North America 26”. A great deal has to go right in terms of infrastructure and execution if Arena’s prediction is to take on any legitimate validity down the line.

Those of us who are longer in the tooth can recall the wide-eyed hope that US fans carried into France 98, the World Cup that followed the delirious adventure of USA 94. We’d made such progress from the overmatched college kids of Italy 90, after all. Four more years of similar advancement – the rise of our very own domestic pro league, for crying out loud! – would surely vault us into, or at least within reach of, the selective club of true contenders, right?

The humbling last-place finish presided over by Steve Sampson slapped those naive thoughts into oblivion. It was never going to be that easy, not even for the Home of the Brave (and eternally bullish). So the Fed and the fans kvetched for a while, then took stock and plowed focus and resources into Project 2010, the plan to pilot the US towards true competitiveness for that World Cup.

Those of us who’ve watched the uneven results of that endeavor can’t help but smirk a bit when reading Arena’s latest remarks. Soviet Russia loved the infamous “five-year plans.” US Soccer, it seems, loves to be seduced by 10-year plans (give or take).

It’s no static target we’re aiming at. The global elite are constantly advancing and evolving, too, often at higher rates of complexity than we can even comprehend. It’s hard to see that core reality changing any time soon.

Then again, we’re Americans. We don’t let ourselves get bogged down by buzzkill reality checks in real life. So why would we be any more rational about the beautiful game?