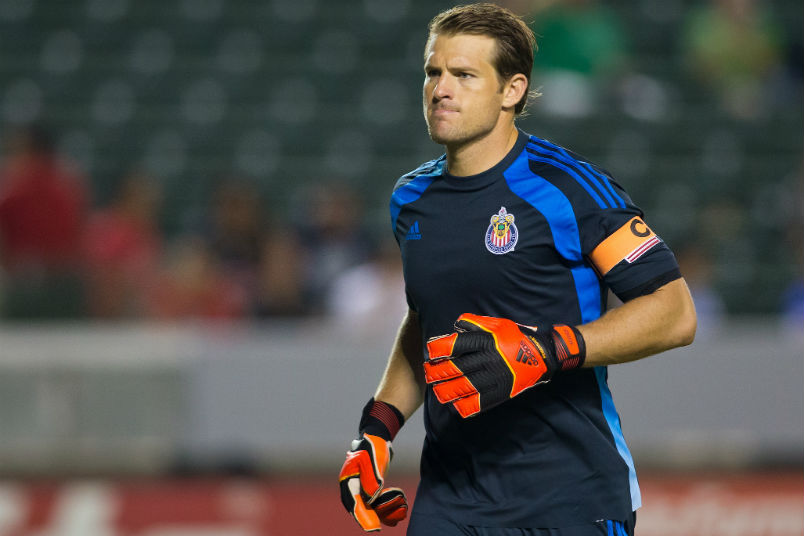 By Luis Bueno – RIVERSIDE, CA (Apr 19, 2017) US Soccer Players – When Dan Kennedy retired last week, a link between MLS and Chivas USA’s history died. After all, nobody embodied the defunct club more than Kennedy.

Earlier this decade, Kennedy was one of the top goalkeepers in the league. When the lights shut off on the failure that was Chivas USA, it was Kennedy who could say that no one else did as much as he had done for that club.

Although Los Angeles has turned the page on that chapter and threatens to close the book entirely when LAFC arrives in 2018, Chivas USA’s influence in MLS and beyond is still strong. More than just aging players or once-prospects now fighting for minutes, Chivas USA was the springboard for several careers both on and off the field. Kennedy’s retirement was a tangible end of an era. Still, there are many careers built in Carson, California for the once-mighty Red-and-White.

Toronto FC’s main architects behind their emergence as an MLS power cut their teeth at Chivas USA. Greg Vanney and Robin Fraser worked, albeit in reverse, together before. The partnership drew more criticism than praise when the two were running things at Home Depot Center (now StubHub Center). Chivas USA did not make the playoffs after the 2009 season. When Fraser took over in 2011, the club hoped to turn things around but were unable to.

Fraser got a raw deal there, though. He was part of the purge the team underwent prior to the 2013 season. Management vowed a return to its Mexican roots and turned the reins over to Jose Luis “Chelis” Sanchez in what was a turbulent ride. The change meant the end of the Fraser-Vanney combination. Had they been able to stick together and stay the course with what the team had been working toward, Chivas USA would have been a strong playoff contender in what would have been Fraser’s third year in charge. Instead, the team became a laughingstock with no direction.

All that was Toronto FC’s fortune. Fraser wound up in New York and became part of a strong coaching staff that saw the club win the Supporters’ Shield in 2013 and come within a match of MLS Cup a year later. Vanney meanwhile joined Toronto FC in 2013. He became head coach midway through the 2014 season. Vanney turned to Fraser and brought him aboard for the start of the 2015 season but his reach into the past did not end there. Also on the Toronto FC coaching staff are former Chivas USA staff members Jim Liston, Dan Calichman and Nick Theslof. TFC goalkeeper coach Jon Conway also spent one season playing for the Red-and-White.

Toronto FC reached last season’s MLS Cup. They were one crazy Stefan Frei save away from winning the championship. With the way the franchise turned out, Chivas USA’s path diverged away from the Vanney-Fraser combination. With time and some stability, the club’s path in Carson could have had the same end. It’s Canada’s gain now.

Vanney is not the lone MLS coach to have ties to Chivas USA. Jesse Marsch and Jim Curtin both played with Chivas USA and both have gone on to become MLS coaches. Marsch has seen more success than Curtin but has also been around on the touchline for longer as well. Also pacing the sidelines as coach is ex-Chivas USA star Francisco Palencia, coach of Liga MX side Pumas UNAM.

Kennedy may be the player who most embodies what Chivas USA stood for but Marsch laid the foundation for that. Marsch was part of the group that stabilized the club in 2006, after a turbulent first season. Marsch’s temperament and demeanor were vital in helping settle things down in 2006. He also laid the groundwork for a steady run of success that helped Chivas USA become a force in MLS for three more years.

Curtin came along during that time, spending the last two years of his career with Chivas USA. Curtin may not have played as much as Marsch and was not as influential on the field as much as his counterpart either but he was a steadying presence in the locker room. Palencia was also a calming presence on the team and was a revelation for MLS when he joined in mid-2005. Unfortunately he did not stay beyond the 2006 season. Palencia is fondly remebered by Chivas USA fans for having given his all during his brief time there.

Both players transferred those skills over into coaching success. Marsch joined former Chivas USA coach Bob Bradley on the USMNT coaching staff and then landed a job with Montreal for their inaugural MLS season. After one year though Marsch moved on. He wasn’t out of work for long. Marsch is in his third year of coaching the Red Bulls and has the club on the brink of a title. New York is one of the Eastern Conference’s true contenders. Helping fuel that run on the field? Former Chivas USA draft pick Sacha Kljestan.

Kljestan was one of Chivas USA’s best-ever draft choices. Taken with the fifth pick in the 2006 SuperDraft, Kljestan had a strong rookie season and continued to improve until his transfer to Anderlecht of Belgium during the 2010 season. Marsch mentored Kljestan throughout their time together, but in particular the first season.

Chivas USA’s first-ever draft choice will make his triumphant return to MLS soon enough. Brad Guzan joins Atlanta United from Middlesbrough this summer. Guzan was a large part of Chivas USA’s early successes and gave his all for the club every time out.

The player who would be starring for the club now had it stayed together though is once again finding his place among the MLS elite. Erick “Cubo” Torres took the league by storm when he joined the club midway through the 2013 season. Torres was the breakout Mexican star the club needed in its early days. Torres scored seven goals in that half-season with the club and 15 more in 2014 and is now the all-time Mexican-born leading scorer in MLS history, having scored more goals than Cuauhtemoc Blanco, Luis Hernandez and Gio Dos Santos, among others.

Torres floundered after the club folded though. He joined the Houston Dynamo but the fit there was not good. He did not score any goals for Houston in 22 matches over the 2015 and 2016 seasons. Loans to Liga MX sides Chivas and Cruz Azul were unsuccessful. This season, he has scored six goals in six matches, including a hat-trick against New York Red Bulls. Torres is once again a star and playing with grace and flair. The difference? On the touchline is the last man to coach Chivas USA, Wilmer Cabrera.

With LAFC arriving next year, this season will likely be the last year ever where the LA Galaxy is the only MLS show in town. An MLS Cup featuring Vanney’s Toronto FC and Cabrera’s Houston side would be a fitting way to usher in the new era as a reminder of how influential Southern California is and has been in the MLS landscape.