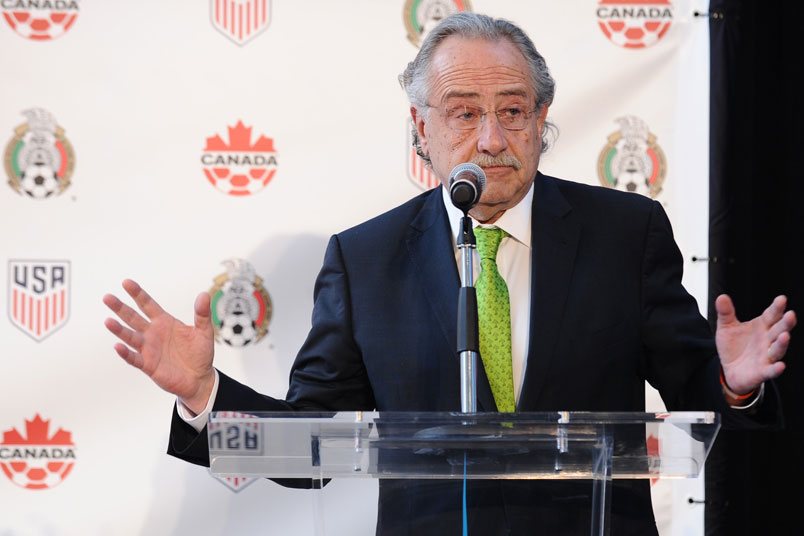 By Luis Bueno – RIVERSIDE, CA (Apr 12, 2017) US Soccer Players – When Diego Maradona paraded the World Cup trophy around Estadio Azteca after the 1986 World Cup final, it seemed like that would close the book on Mexico’s participation as World Cup hosts. It would’ve been quite the ending. Argentina beat West Germany 3-2 in what was a thrilling end to an intense and memorable tournament that featured many historic moments. The 86 World Cup brought us Maradona’s “Hand of God” goal against England.

With the rise of technology and the modernization of soccer stadiums around the globe, Mexico’s stadiums no longer compete. Since 1986, four nations have been first-time hosts while the World Cup made its way around the globe. There’s a list of countries that would be in line before Mexico got a third opportunity.

Things change. Mexico’s World Cup hosting history is not over. In fact, it looks quite solid. Mexico is part of a three-pronged bid with the United States and Canada that will try and land the 2026 World Cup. From the moment of the announcement, that bid is now the best option for FIFA.

With this bid, Mexico would once again be trailblazers in the World Cup. The national team would have something else to point to as a source of pride while the Mexican people can once again show the world their hospitality and generosity. The only downside would be the amount of games.

The 2026 World Cup will be the first expanded World Cup. Instead of the current format which sees 32 teams participate, Mexico/Canada/USA 2026 would feature 48 teams and a total of 80 matches. Mexico and Canada would each host 10 while the United States would host 60.

That tempers the excitement, with only those 10 games played on Mexican soil. However, that could be a necessary evil. A bid by only Mexico would likely be impossible to see through. Mexico cannot compete with the infrastructure the United States offers. Thanks to the NFL, the US features many modern venues with gigantic seating capacities as well as luxury suites that offer the chance for an obscene amount of revenue. No other nation in the world can compete with the United States when it comes to the amount of large, modern stadiums.

Politically, though, the US has been less than welcoming this year. Travelers from the Middle East have seen their share of difficulty in trying to reach their American destinations due to travel restrictions the American government has or has attempted to levy. Those restrictions affected a soccer tournament as well. A Tibetan girls soccer team couldn’t get visas for its players and thus were unable to compete in the Dallas Cup.

Cutting through the red tape to get a team like say Iran to the US for a World Cup is one thing, but if its fans cannot travel, then FIFA may not want to consider the US as a viable option. Mexico and Canada have had no such issues. Iranians would likely enjoy a smooth trip to watch their team compete in the World Cup if they were visiting Mexico or Canada.

Offering sanctuary for such teams is a major selling point for the Mexico. Another is the history. Mexico is the first nation to host the World Cup twice, hosting in 1970 and taking on the 1986 World Cup after Colombia’s attempts to host it fell through. Until the Maracana hosted the World Cup 2014 final, Estadio Azteca was the only stadium to host two World Cup finals.

Estadio Azteca certainly will have a role in 2026, although it is unlikely to be in the running as host for the World Cup final. Perhaps that should have been one area where the Mexican federation could insist more. Mexico City is safer now than it has been over the last couple of decades. The Mexican capital is a central location and offers relatively easy travel from all points in North America and around the world. The city could easily host the world’s greatest sporting event and fans traveling to watch it.

The United States though would host every match from the quarterfinal on. At best, Mexico could host a few of the Round of 16 matches and probably will host a few knockout-round matches as the format for that World Cup must change with 48 teams involved.

With just 10 matches, Mexico would face difficult decisions. Do the big three soccer cities – Mexico City, Guadalajara, Monterrey – get the spoils of hosting matches? Or do other cities like Torreon (home to Santos Laguna), Morelia, or Puebla deserve to host matches as well? Should Mexico give Estadio Azteca the bulk of the games and have one-off matches in other cities or should the organizers divide the 10 games among, say four or five venues?

It’s not an ideal situation, certainly. The eyes of the world will be on Mexico and the feeling would be that those eyes remain on the country for as long as possible. Mexico is not in a place to host a World Cup on its own, and if being part of a three-nation bid is a way to become host nation for the third time over, so be it.

Many fans who were young or not even born yet in 1986 likely did not envision the chance of watching Mexico play a World Cup match on home soil, but that is what is in the future. Sure, the chance to win a World Cup would be greater if the entire tournament were there. That’s not the way of things.

What is certain is that, even in a soccer-mad nation like Mexico, the chance of being World Cup hosts will bring out the best in the nation and send a fervor of excitement through the country, which only serves to help grow the game. That counts as a win under any circumstance.