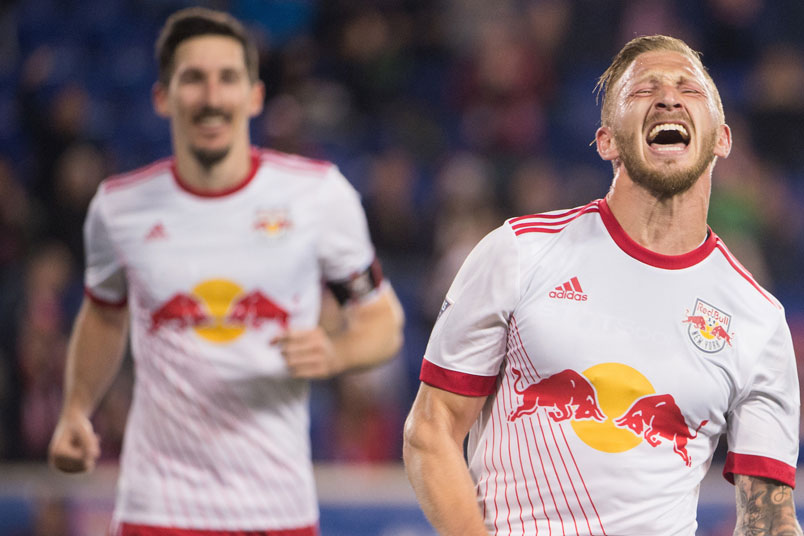 By Clemente Lisi – HARRISON, NJ (Apr 17, 2017) US Soccer Players – The New York Red Bulls, despite strides made in recent years transforming into an MLS Cup contender, is a team always seemingly in crisis mode. That normally starts early in the season. They usually go on to finish among the top in the Eastern Conference, but the old problem persists of crashing out in the playoffs.

The club is following this familiar pattern again this season. New York got off to an ominous start after losing to the Vancouver Whitecaps in the CONCACAF Champions League quarterfinals before the MLS season had even started. That came after the team spent most of the winter grappling with unsettling rumors and unexpected exits. Marsch himself appeared on the way out, promoted by the club’s parent company to coach Austrian team Red Bull Salzburg. The rumors persisted for much of January, but Marsch never left. Instead, he committed himself to trying to win New York a title.

Then came the news that General Manager Ali Curtis really was on the way out. The architect of the team’s rebuilding over the past few years, it was bizarre that the team would part ways with him. After a few weeks of uncertainty, the club officially announced in February that Curtis was gone.

On the field, the team also made some surprise moves. In January, they traded captain and fan favorite Dax McCarty to the Chicago Fire. New York, it appeared, was banking on its remaining stars Bradley Wright-Phillips and Sacha Klejstan to get the job done this season. Marsch is also hoping a younger roster, infused with stars from its budding youth academy, will be the winning recipe in 2017. Two road losses this month – a 4-1 defeat versus the Houston Dynamo and 1-0 to Orlando FC – put into discussion Marsch’s ability to attain results with his current roster.

What will be the formula for success for this Red Bulls teams remains a question. Two months into the regular season and it appears the Red Bulls are still a work in progress. Other teams in its conference, like rivals NYCFC, the Fire, and expansion Atlanta United FC, are contending for playoff spots. The expanded field and a stronger conference will make it harder for New York to recover should they fall behind early. On the other hand, Major League Soccer can be very forgiving. It’s the teams that reach top form later in the season that are often rewarded in the postseason.

A switch in tactics has also made a difference. Marsch’s current 4-3-2-1 formation, a shift from the 4-2-2-2 he used earlier this season, seems to be paying off. Wright-Phillips and Klejstan have thrived in recent weeks compared to the first few weeks of the season.

“We were 1-6 (starting the season) last year and people were writing us off,” said Marsch. “This year there’s been a lot of talk about different things…. I’ve seen things come together in a really good way and we’re always measured about what results mean and what progress – real progress – means on a day-to-day basis.”

Marsch blamed this season’s losses to playing on the road and the overall pattern across the league of teams winning at home.

“You look around the league, the home teams are getting results, and that’s just the way it goes in our league,” he said.

The Red Bulls will host the Fire this coming Saturday, before going on the road again on May 3 versus Sporting Kansas City and four days later against the Philadelphia Union.

The Red Bulls’ youth movement – second only to the development standard set by FC Dallas – has also not gone unnoticed. Rival DC United was on the receiving end of a 2-0 loss earlier this month, where 21-year-old Alex Muyl, a Homegrown player, scored the game’s opening goal.

“I think they’re a good team and I think all their youngsters are good players,” DC United coach Ben Olsen told reporters after that April 15 defeat. “I think they’re (youth players) getting a lot of opportunity to show what they’re about. I think that’s always a positive.”

This past Saturday night’s game at Red Bull Arena against the Columbus Crew, in first place coming into this weekend, offered RBNY another chance to show off its youth movement while also trying to rack up points versus a conference opponent. The outcome was another 2-0 victory for the Red Bulls with Muyl scoring his second goal of the season.

“Still early stage of the season, but eight games under our belt, I feel like now we’re getting to the point where we’re starting to see ourselves get better every day,” said Marsch. “This was always going to be a good game. It was always going to be a tough game. When we play Columbus, they stylistically challenge what we do. They are good at what they do. The challenge for us is to be really good at what we do.”

It may not matter what the Red Bulls do during the regular season. They need to grab enough wins to make it to the postseason. Once there, however, the challenge for New York will be figuring out a way to unlock the secret of winning in the playoffs.