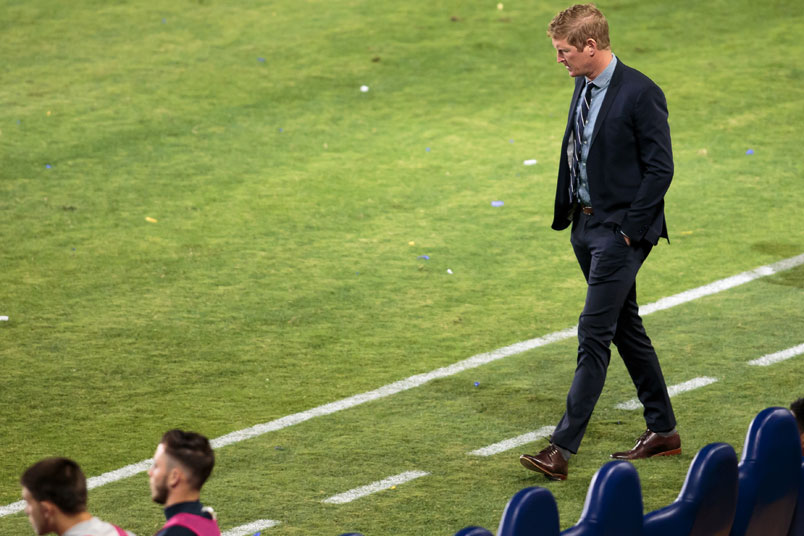 By Jason Davis – WASHINGTON, DC (May 5, 2017) US Soccer Players – The landscape of the 2017 MLS season is gaining a bit of focus. Two months into the campaign, most teams have crossed the one-quarter threshold. There’s a long way to go, but we at least have some idea of who these teams are and what they are capable of.

Even if you were reserving judgement on the good, bad, and ugly teams in MLS until later in the year, the teams rooted to the bottom of the standings have to start to worry. There’s always the chance for an MLS-style late season surge to grab a postseason spot, but that might be asking a lot.

Worry leads to panic and panic leads to change. While the history of MLS suggests only one or two head coaches are likely to lose their jobs during the 2017 season (and one already has, RSL’s Jeff Cassar), there remain a few coaches who should show concern.

Four, to be exact. Based on the current standings and some specific factors related to club and ownership, four MLS coaches could justifiably already be occupying the hot seat.

Any discussion of the hot seat has to start with the embattled head coach of the league’s marquee team. The task of following in the footsteps of Bruce Arena was always going to be a difficult one for Onalfo, whose previous two stints as an MLS head coach in Kansas City and DC United both ended with August dismissals. Onalfo’s resume didn’t make him an obvious choice for a team that expects to compete for the championship every year, something that is certainly working against him with the Galaxy in 10th-place.

Also working against Onalfo is the obvious talent at his disposal. Jermaine Jones didn’t suddenly become a poor midfielder, even if he is 35. Gio Dos Santos has a single goal and no assists so far this year. The Galaxy have had issues with injuries, but even those don’t excuse the 11 points already dropped at home or the long periods of uninspired play.

Onalfo was always an odd choice for Galaxy. If the results don’t get better, and quickly, he may not make it to August this time.

Curtin’s name is an obvious one to include based solely on the club’s winless record so far this season. Philadelphia is the only team in MLS without a victory in 2017, and the longer that fact holds, the more likely it seems that the Union will have to make a change. Everyone from owner Jay Sugarman to sporting director Earnie Stewart to Curtin himself is preaching patience. Perhaps the only bit of saving grace for Curtin is the uncertainty over who to blame for Philadelphia’s problems. How much of it should Curtin bear when Sugarman seems unwilling to spend enough to keep up with the rest of the league and Stewart is the man choosing players?

The Union’s frugal nature and the “long term plan” aspects of their philosophy should keep Curtin in the job, for now. Philadelphia’s history of turning over the head coaching position under Nick Sakiewicz also plays a role, with the club now choosing to break from that era with stability.

Montreal is another club that has gone through a handful of coaches in their MLS existence. Joey Saputo went through three different field bosses before settling on Biello, a long time servant of the club. Biello helped guided the Impact to surprise playoff berth in 2015, then took the club to the Eastern Conference finals in his first full season last year. With the club now struggling, the obvious question is how much that record and his ties to the club play to his benefit with Saputo.

Montreal has had injury issues as well, and does get some help when Swiss midfielder Blerim Dzemaili arrives from Bologna. Biello doesn’t seem to be in any imminent danger of losing his job, but one can never be too sure when it comes to the Impact.

It might be a bit of a stretch to include Heaps in this group, but only because the Revolution organization doesn’t seem ambitious enough to demand more at this stage of the season from their head coach. Heaps is in his sixth season in charge of New England, a stretch that includes an MLS Cup appearance and two other playoff berths. The club missed out on the postseason in 2016 on a tiebreaker to the Philadelphia Union.

In other words, Heaps seems to be living off of the 2014 run to the title game while mostly treading water since. The general consensus seems to be that the Revs have more talent, especially on the attacking side of the ball, than many of their rivals in the conference. Yet they consistently fail to live up to that talent, as evidence by their current tenth place position in the standings.

This list is short because MLS coaches are quite often afforded more than a single season, regardless of results. The playoffs provide a cushion, so even coaches whose teams are under-performing are safe from the axe.

Meanwhile, against the backdrop of several coaches getting plenty of leash despite poor-to-mediocre results comes a report that LAFC, set to enter MLS in 2018, is considering former Crew midfielder Guillermo Barros Schelotto for the head coaching position. Schelotto is currently in charge of Boca Juniors, the famed Buenos Aires club.

Why would Schelotto consider the LAFC job when he’s currently leading of one of South America’s biggest and more famous clubs? Exactly because MLS head coaches do get so much leash. In MLS, it takes a lot just to get on a list like this. In Argentina, clubs fire managers simply for playing the wrong kind of soccer, win or lose.