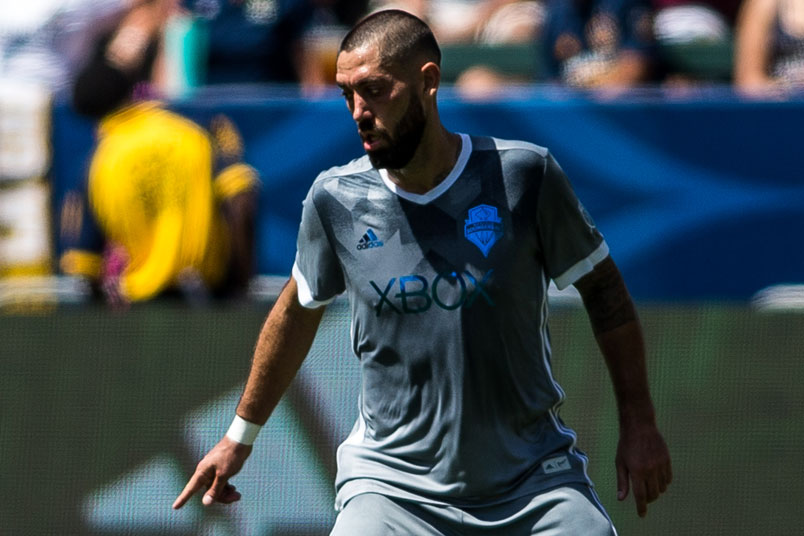 By Clemente Lisi – NEW YORK, NY (May 1, 2017) US Soccer Players – We’re far enough into the 2017 MLS season to start taking the standings seriously. Although the league’s unpredictable nature can turn even a mid-table team into a contender once the playoffs roll around, there are some things we can glean.

There are a number of teams already trying to get an early jump at the Supporters’ Shield. At the other end of the table, there are some teams grappling with the possibility they may miss the postseason. Then there are expansion sides Atlanta United FC and Minnesota United FC. Both took different approaches going into the season with the outcome obvious from the beginning. Atlanta United looks like a playoff contender. Minnesota doesn’t, giving up 25 goals, the most of any team in the league.

There have been a few trends to emerge this year. The most notable, as it pertains to the standings, has been teams playing very well at home. Only six teams have either .500 or losing records at home. That means 16 clubs have made use of the friendly confines of its home stadium and tifo to rack up points.

While there is always a too-early-to-jump-to-conclusions feel about observations made after just two months, it does offer a snapshot of where have teams been and what they will need to do to either remain at the top or improve. With so much going on in Major League Soccer over the past nine weeks, here are the answers to five burning questions based on early impressions.

Is Orlando City SC for real?

A look at the standings after just nine games shows that it’s still very tight at the top. Leading the way is Orlando City SC with 18 points, followed by the Portland Timbers (MLS Cup champions in 2015 who missed out on the playoffs last season) with 17 points. Right behind them: New York Red Bulls (who are 4-0-1 at home this season) at 16, followed by Sporting Kansas City and FC Dallas at 15.

Orlando and Portland are the two impressing so far. Orlando has a fantastic fan base and that has helped the team catapult into first overall. Incredibly, the team has been able to accomplish so much with the absence of its talisman Kaka. The Brazilian only returned to action this past Saturday (in a 2-0 win against the Colorado Rapids) after a hamstring injury had him sidelined since the first game of the season. Whether Orlando City SC can maintain this pace is the question. Having Kaka healthy will help. Cyle Larin, meanwhile, has established himself as one of the league’s best strikers and can often change the outcome of a game. However, teams like Portland, the Red Bulls, and FC Dallas are likely to contend for the Supporters’ Shield for much of the season based on current form. At the very least, Orlando is playoff-bound come October.

Can the Seattle Sounders repeat as champions?

Repeating may be even more difficult than winning the first time around. Of course, Seattle did it last year in amazing style last season. They fired longtime coach Sigi Schmid during the summer with the team out of the playoff hunt and languishing near the bottom of the Western Conference. Despite losing Clint Dempsey to a health issue, the team turned things around under assistant Brian Schmetzer in time to win it all.

The Sounders look stronger this year. At the moment, Seattle is barely above the red line with a 2-2-4 record. Dempsey is having a great season with his three goals and an assist, forming – along with Jordan Morris and Nicolas Lodeiro – one of the most potent attacks in the league. At the very least, this is a Sounders team that can play entertaining soccer and give neutral observers a team they want to watch.

How far can Atlanta United go?

The expansion side came out to a roaring start this season – a testament to the roster it put together in the months leading up to the start of the regular season. Despite being in its first year, Atlanta has an elite coach and features a lineup loaded with Latin American stars. There is certainly excitement around this franchise and its current 3-2-3 record does little to show how strong a team this is. They play an amazing transition game and often catch opponents flat footed.

Nonetheless, Sunday’s 3-1 defeat at home to DC United revealed several cracks. Above all, Atlanta United appears to be a team that sometimes has a hard time breaking down an opponent – especially if that adversary plays a strong defensive game like DC United utilized. Atlanta United will need to be more consistent if it wants to make the playoffs.

Will the Los Angeles Galaxy miss the playoffs?

The Galaxy has, by far, been the most disappointing team in MLS so far this season. With Los Angeles expected to contend for the title every season, the team coached by Curt Onolfo has left the Galaxy faithful scratching their heads. Its 2-1-5 record, which puts it in 10th place in the Western Conference, has Onolfo hanging by a thread. Losing players like Robbie Keane has certainly showed.

The biggest worry is whether the Galaxy has lost too much ground. Although it remains early still, the Western Conference is very tough. Going on a winning streak would help. Getting results against other teams that have gotten off to poor starts – like the Philadelphia Union – would also help. Instead, the Galaxy squandered many chances and could only muster a scoreless draw at home Saturday versus the Union. A coaching change may seem inevitable. Only a Sounders-like performance from last year will get this team in the postseason.

Will Erick ‘Cubo’ Torres be the league’s MVP?

Mention who has been the best player so far this season and a few familiar names come to mind. Toronto FC’s Sebastian Giovinco and Portland’s Diego Valeri are at the top of the list. For me, however, the player who has gained some attention early on has been Torres. His stats say it all – seven goals in eight games. Two of those goals have been game-winners as the Houston Dynamo tries to get back to winning ways.

A nose for goal with the ability to barrel down the wings and create chances has seen Torres regain his groove after reuniting this year with coach Wilmer Cabrera. The first-year Dynamo manager had coached Cabrera at Chivas USA in 2014. It shouldn’t surprise anybody if the 24-year-old Designated Player gets a call up to the Mexican National Team later this year. It would be even less of a surprise if he wins the league’s MVP award this season.