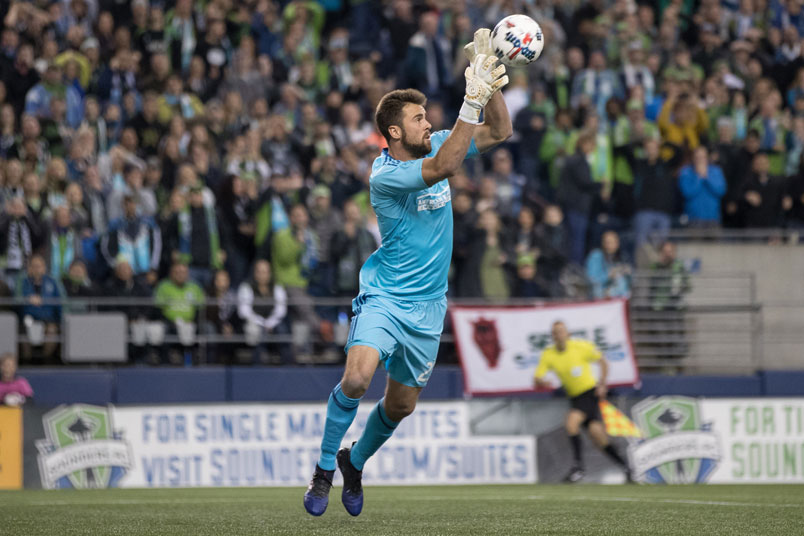 By Clemente Lisi – NEW YORK, NY (May 8, 2017) US Soccer Players – It’s every team’s nightmare. Your starting goalkeeper picks up an injury during a game. He’s subsequently stretchered off. Following a few tense moments, your backup goalie quickly takes off his tracksuit, sprints towards the goal, and takes his place on the field. Will he be up to the task?

Major League Soccer coaches have more than just injuries to worry about when it comes to goalkeepers. Since MLS plays through most international dates, teams have to deal with National Team call-ups forcing them to be without a preferred starter. That means that the backup ‘keeper needs to be solid. It’s the ability to shake off any rust and quickly step up that makes a backup goalkeeper so valuable.

At age 30, Real Salt Lake’s back-up goalie Matt Van Oekel finally got the chance to play in his first-ever MLS game in March. Van Oekel made his debut against the New York Red Bulls with starter Nick Rimando on USMNT duty.

“It was incredible. It was a dream come true,” Van Oekel said of the scoreless draw played on March 25 at Red Bull Arena. “It’s taken me 10 years to get to MLS. I’m glad that I was able to showcase my stuff and hopefully the coaching staff knows I can step in when Nick is gone on international duty.”

Van Oekel has done more than that. He’s played in four games this season after Rimando suffered a right leg injury on April 22 in a 3-1 loss against Atlanta United. While RSL has struggled this season, goalkeeper coach Daryl Shore called Van Oekel “a really solid” #2. Van Oekel played his entire career in the lower leagues and signed with RSL this past December. He played in the NASL for Minnesota United FC and FC Edmonton. He won the 2016 NASL Goalkeeper of the Year award, an honor that drew the attention of MLS teams.

“He’s worked his way up and earned his chance,” said Shore. “We’re happy to have him on our team.”

Like Van Oekel, there have been other back-ups who’ve gotten a similar break. The hope is to either impress their coaches enough to become starters or get picked up by another MLS team in need of new blood. While the overall talent pool has gotten deeper in MLS thanks to the creation of Homegrown Player contracts and rise in Designated Players signings, finding a solid backup goalkeeper remains no easy task. Real Salt Lake only signed Van Oekel after its second-choice ‘keeper for the past four years, Jeff Attinella, joined Atlanta in the Expansion Draft.

While the league has expanded to 22 teams – creating more slots for starting keepers – there still isn’t a lot of new blood when it comes to the position. Given the rapid rate with which the league has grown, there has been a lack of minor-league teams to keep up with the growing demand. As a result, this is the position where most teams like to sign and keep talent for as long as they can. Goalkeeper is not the place you generally want to start a rookie. Established players with a track record are ideal. While teams only have three goalies on their rosters, only one gets most, if not all, of the minutes.

Rimando is a great example. He’s been a starter for RSL since the 2007 season. Rimando has amassed 431 regular-season appearances in MLS, making him the league’s all-time leader in that category. Another regular between the woodwork has been New York Red Bulls goalie Luis Robles. He’s made 149 regular-season appearances for the club over a span of six seasons. Since 2014, Robles has also played in every minute of every regular-season game. This past March, he recorded his 142nd consecutive appearance. That broke midfielder Chris Klein’s record.

That leaves aspiring goalkeepers with few MLS options. Some have spent nearly their entire careers playing backup in MLS. Others have opted to start in the USL or NASL in the hope of getting noticed. Despite that fact, this is a country with a long tradition of nurturing world-class goalkeepers. For years, America’s most-prized soccer export was goalkeepers.

In the early years of MLS, teams had to rely on the college ranks or word of mouth to find a great goalie. These days, teams like to pluck from their academies or minor-league affiliates. It is rare that foreign goalies join MLS. Howard remains the only one to ever get a Designated Player contract. Even when starters leave a team, they usually end up starting for another in MLS. For example, Bobby Shuttleworth left the New England Revolution only to end up the starter for Minnesota United FC. Sean Johnson, once a regular for the Chicago Fire, now starts for NYCFC.

Another backup goalie that’s gotten a shot again as a starter this year is Zac MacMath of the Colorado Rapids. With Howard serving a three-game suspension following an altercation with fans last month, coach Pablo Mastroeni went with the former Philadelphia Union starter. In total, MacMath has made four appearances in 2017, giving up five goals. Although the Rapids lost all three games during Howard’s absence, MacMath proved valuable given his experience and ability to come up with some big saves.

When Howard injured himself last year in the USA’s loss to Mexico in World Cup Qualifying, the Rapids lost him while in the midst of the MLS Cup Playoffs. MacMath stepped in, but even he could not stop the Seattle Sounders’ march to its first MLS Cup title. MacMath was the starter prior to Howard coming over from Everton last summer. MacMath had put together an 11-game unbeaten streak at the time Howard took the job. In the end, both goalkeepers played in 17 regular-season games in 2016. MacMath had the better record, but that’s not the point for a team opting for a player like Howard.

Howard has also been on the receiving end of the goalkeeper carousel. He started his career as Tony Meola’s backup in New York. He had to fight for his place at Manchester United. That happened again after a sabbatical from the USMNT.

For the first time in a decade there was an opening for starting US goalkeeper. The job went to Brad Guzan, who had a stellar Copa Centenario last summer, only to seemingly lose the starting position to Howard once Bruce Arena took over coaching duties from the fired Jurgen Klinsmann.

Guzan’s return to MLS means another goalkeeper will step aside. Atlanta United goalkeeper Alec Kann has had the job while the team waits for the conclusion of the Premier League season. That will mean Kann will end up on the bench. At age 27, Kann has only played in 15 MLS games in his career before this season. Kann is clearly a late bloomer, picked up by Atlanta in the Expansion Draft only after Sporting Kansas City left him exposed. Not always a bad thing given the longevity of a goalkeeping career.

“Just getting games is the biggest thing as a goalkeeper,” Kann told MLSSoccer.com last July after he started for Sporting KC in a 1-0 win versus the Portland Timbers. “Dressing and traveling for games is nice, but at the end of the day you need to play games.”

The plan all along was for Guzan to start. While teams continue to grapple with where to sign talent, Kann’s future remains in doubt. He could decide to be a benchwarmer in Atlanta or go elsewhere at some point in hopes of starting based on what he’s done so far this season. With Guzan starting, Kann may get games in the US Open Cup and little else. It’s not ideal, but it’s a better situation given the rounds of expansion. Not so long ago, there were only ten starting jobs in MLS.