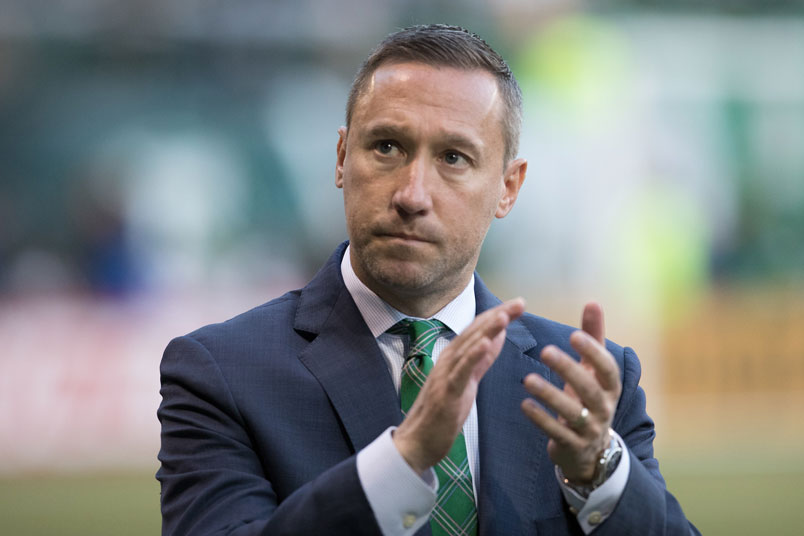 By Jason Davis – WASHINGTON, DC (May 3, 2017) US Soccer Players – The peculiarities of MLS can make simple questions difficult to answer. Like which club’s coach faces the most pressure?

MLS is still a young team with many younger clubs, making it tougher than it would be in other leagues and other sports. Market size, history, relevance in the community, ownership’s financial commitment. All of these play a role in dictating how much pressure a given coach feels. Even then, that pressure is often deferred. The regular season is a long trek towards more than half of the league making the playoffs. The leashes must be long.

In the fairest of terms, it’s probably not even possible to compare the pressure any MLS coach feels to that of his counterparts in Europe or Latin America. Just the media pressure changes things. Still, taking MLS on its own terms, there has to be coaching jobs with more pressure than others.

Starting that list with the LA Galaxy wouldn’t surprise any MLS fans. There’s a tradition of winning and spending. That raises the expectations at StubHub Center. Add in market size and a population of soccer fans well versed in the game. Simply making the playoffs is never good enough for the Galaxy. Any Galaxy coach recognizes the pressure from the moment he steps into the job.

Listen to the current complaints from Galaxy fans about the state of their team. That’s all you need to know about what happens when things go wrong. That’s different than the mainstream media picking up on a club’s struggles and fueling a discussion over a coach’s status.

Curt Onalfo probably doesn’t feel very secure in his job at the moment. That’s not because the local sports media is churning out column inches or spending radio time calling for his head.

It’s for that reason Portland Timbers owner Merritt Paulson believes that the Timbers’ head coach faces more pressure than the Galaxy boss. Expressing that contention to Max Bretos and Herculez Gomez on the duo’s ESPN FC podcast, Paulson outlined specifically the media attention differences between Los Angeles and Portland. The Timbers have a bigger profile on a smaller stage. Paulson’s argument is that makes it tougher on a coach when the locals pay closer attention.

Paulson mentioned his obvious bias. Still, it’s a good argument. There aren’t NFL, MLB or NHL teams in Portland, much less two in each of those leagues. LA takes hits for not being the most aggressively passionate sports city in the country. Even if it was, soccer in LA couldn’t get around that reality.

Let’s accept that the amount of pressure a coach feels in his job is an expression of MLS traction in a city. The question of balance for the league between the biggest markets and those where teams will stand out as the expansion era continues looms large.

MLS needs to be in places like LA, New York, and Chicago. Rarely will the coaches in those markets get into their cars and hear a radio debate over their performance. In places like Portland, Orlando, and perhaps San Antonio, San Diego, and Raleigh that possibility rises significantly.

There’s another way to look at pressure, of course. If and when a head coach isn’t winning, and his club is either out of the playoff hunt or in danger of missing out, is his team likely to let him go? The culture of MLS has largely been a forgiving one for coaches over 22 season. Only a handful of coaches lose their job quickly. If the willingness of ownership to fire a coach is the real measure of pressure, than pressure is mostly down to the whims and ambitions of owners. Ones like Paulson himself.

Orlando’s impressive fan support might have played a role in the ouster of Adrian Heath after one-and-a-half years in charge of the Lions. It might just have easily been the personal frustration of principal owner Flavio Augusto da Silva that sealed Heath’s fate. It feels too soon to call Orlando City one of the league’s highest pressure jobs, no matter what happened with Heath or the attention the club gets in Central Florida.

So what is the highest pressure head coaching job? Is it Portland? LA, no matter the club’s local importance? New York? Seattle?

As with so many things, pressure is in the eye of the beholder. That’s the situation whether it’s the coach himself, the owners, the fans, or whatever media apparatus is in place to cover an MLS team in a given MLS town.

What would make this more interesting is if the pressure across the league increases. That means MLS itself changing rules or formats in ways that increase the pressure to win.

There are places in the world where Caleb Porter might have lost his job for failing to make the playoffs in 2016, even with a championship on his resume from just one year before. MLS is not yet that place. Instead, it’s a place where shifting priorities and the quirks of the cities it inhabits bring a fascinated wrinkle to an assessment of who faces real pressure.