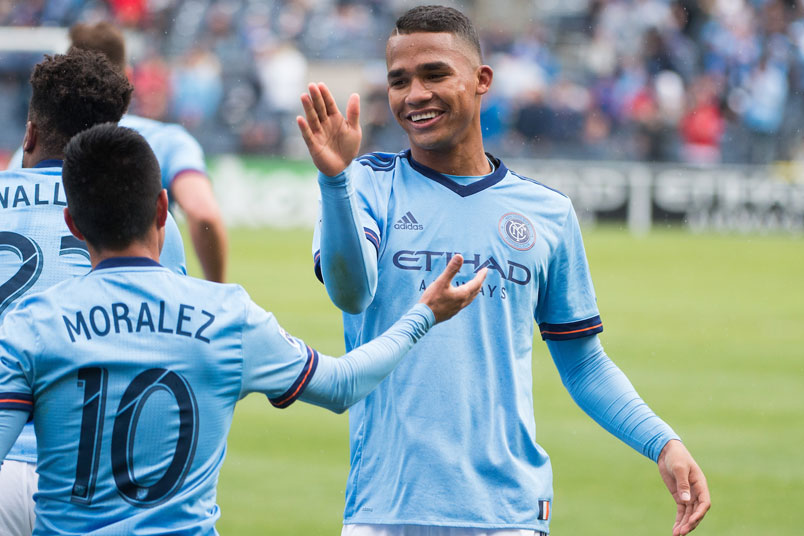 By Jason Davis – WASHINGTON, DC (May 31, 2017) US Soccer Players – Forgive me if I’m still not sure what New York City Football Club is, exactly. Or rather, forgive me if I can’t pin down exactly what they’ll be.

NYCFC is the shiny new plaything of one of the world’s richest people. At the same time, it’s an American brand extension for an organization that is fundamentally challenging the way we think about soccer ownership. The team plays in a baseball stadium. There’s no clear path to the soccer-specific venue somewhere within the boundaries of the city of New York. Somehow, NYCFC is already at a higher profile than all but a handful of Major League Soccer clubs.

Is NYCFC truly relevant in the country’s largest city? Probably not, but that doesn’t mean it doesn’t matter or hasn’t achieved what MLS hoped it would just by existing within the five boroughs. City Football Group has invested in name players, currying the spotlight in the process, and it has paid dividends.

So no, what NYCFC is now or what it might be in the future isn’t exactly clear. One thing we can credit the club for as it plays its third MLS campaign as a verified contender in the Eastern Conference, however, is its role in elevating the reputation of Major League Soccer abroad. From the club’s head coach down through its playing roster, NYCFC is taking a leading in establishing MLS as a place where both sets can hone their skills.

This comes up now for a couple of reasons. Through its relationship with Manchester City, NYCFC is benefiting from the emergence of 19-year old Venezuelan Yangel Herrera in its midfield. Herrera has effectively taken Andrea Pirlo’s job and looks unlikely to relinquish it any time soon. Currently away with the Venezuelan U-20 National Team, Herrera is one of the stars of a team that has been extremely impressive in South Korea. Herrera himself scored the goal that put the Vinotinto into the quarterfinal stage, an extra time header against Japan.

Herrera is not NYCFC’s player. MLS and the club will not benefit financially from his sale. Still, there’s no doubt that they reap something from his playing in their squad. Head coach Patrick Vieira has not hesitated to give Herrera significant responsibility, sending a message well beyond the Bronx that he and the organization will not let talented players – no matter how young – wallow on the bench.

With Herrera’s exploits at the notorious meat market that is the U-20 World Cup, the name “New York City FC” is getting noticed. The danger that NYCFC would feel like a minor league outpost of Manchester City is still there, but good publicity certainly helps.

Good publicity is also part of the deal when Vieira sees his name connected to managerial jobs back in Europe. It’s no secret that the former Arsenal and France legend wants to move up the hierarchy of coaching jobs, well beyond what MLS and NYCFC can offer. After just a year and a half in the Bronx, Vieira has links to jobs back in his native France. That’s largely down to his famous name, but he has also shown himself capable of leading a senior level squad with his exploits at NYCFC.

Regardless of the “why”, Vieira, like Herrera, is an NYCFC-connected figure whose provenance is getting mentioned in more prestigious circles. That’s good for the league, though NYCFC fans won’t want to see either leave any time soon. Basking in the glow of their (on-loan) player earning praise and their coach (under contract and adamant about his commitment in New York) is one thing. Seeing them getting bigger and better opportunities is another.

It will be easier to replicate the Herrera phenomenon in the future. MLS clubs are already beginning to flex extra financial muscle to scoop up talented players from less-soccer rich countries and getting some reflected glory because of it. In Atlanta, United can count Herrera’s countryman Josef Martinez and Paraguayan international Miguel Almiron among their squad. Both players are senior level fixtures for their countries, putting the name of Atlanta United and MLS on big stages when the pair take part in South American qualifying.

MLS will continue to sign players from countries like Argentina, where there is plenty of talent that is both overlooked and underpaid. Argentineans of MLS-caliber probably won’t be showing up in the La Albiceleste any time soon. That’s true of a host of other countries across both South America and Europe. If MLS is going to expand its pool of international caliber players beyond CONCACAF nations, signing or loaning the brighter of lights of places like Venezuela and Paraguay makes sense.

Coaches are a different situation. MLS can’t necessarily want coaches who see the league as a stepping stone to bigger jobs. If such a thing happens occasionally, it’s a net positive. Vieira could establish a path that will benefit MLS by bringing famous names in the dawns of their coaching careers to North America.

NYCFC’s relationship to Manchester City, and the liberalization of their loan deals so as not to demand a purchase option, brought Yangel Herrera into MLS. That’s something that the league and its clubs can replicate.

MLS has made big strides towards full participation in the worldwide soccer community. There’s a long way to go before the league can count itself among any sort of elite, but progress is progress.

It’s NYCFC who’s playing a strong part in that. The New York club with the big money owners that is nevertheless difficult to pin down. What is NYCFC? For now, a driver of a better international profile for their young American league.