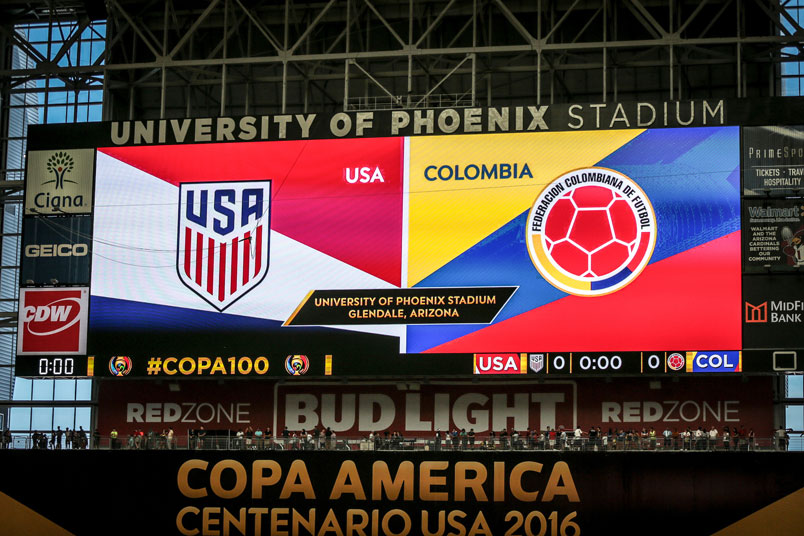 By Charles Boehm – WASHINGTON, DC (May 4, 2017) US Soccer Players – This week Grant Wahl delivered major news that should reverberate across the American soccer scene for months, likely years, to come.

The Sports Illustrated and FOX correspondent revealed on Tuesday that the US Soccer Federation is sitting on a whopping $100 million in surplus cash. If Wahl’s numbers are correct – and Federation officials have yet to deny them either publicly or in response to media requests for further information – it’s a stunning harvest. It’s the result of an eye-watering $46 million profit off last summer’s Copa America Centenario.

That means the event – which featured big-time talent, but astronomically-priced tickets and some less-than-full stadiums – vacuumed up more than three times the payday originally projected in the Federation’s budget. It also strongly suggests that the other revenue sources, which include corporate partnerships, proceeds from National Team games, and registration fees for nearly every player of any age or ability level in the country, are thriving as well.

A year ago, well before this latest high-water mark, USSF president Sunil Gulati was already quite bullish on the financial outlook. Back then, he said that the Fed was in an “extraordinarily good place” at the 2016 annual general meeting. Truth be told, I’ve had a hard time thinking about any other soccer-related matters since hearing Grant’s reporting. It’s a revelation with more than a few layers and consequences, and it could have enormous ramifications for our sport.

First and foremost, even Gulati’s angriest detractors must take a moment to acknowledge his savvy stewardship in order for US Soccer to reach this point. His organization was once world soccer’s malnourished younger sibling, chronically cash-strapped and uncertain. Some of the decisions made to reach this flush position surely have some questionable elements to them. Gulati is a realpolitik pragmatist, and probably even a ruthless one. Still, he deserves credit for expanding the options at the USSF’s disposal.

Unfortunately, the more I think about it, the more uneasy I become. Could what should be an enormous boon for soccer in this country become yet another problem?

Wahl reports that US Soccer is mulling a large-scale construction project with the funds. A “new dedicated national training center” along the lines of the glittering facilities found overseas like Clairefontaine, Coverciano, and St. George’s Park. The Fed already has ready access to just such an environment as a primary stakeholder at StubHub Center in Carson, California. Apparently, it’s getting “crowded” there thanks to the arrival of temporary tenants the Los Angeles Chargers, the NFL franchise that just bolted from San Diego.

Many veteran soccer heads will already be rolling their eyes at this point.

Set aside the questionable logic of StubHub’s gorgeous amenities now being in any way compromised from the Fed’s perspective, now or in the future. Forget the huge, modern field clusters that are already regularly available for similar usage in Dallas/Ft Worth, suburban Denver and Seattle, Bradenton, Florida and elsewhere. Ignore for a moment the dazzling “National Training and Coaching Development Center” in the latter stages of construction in Kansas City as we speak.

Or don’t. Let’s talk about Kansas City. That’s an $80 million complex that the USSF will have ample access to despite little direct involvement with its financing, which includes a sizeable chunk of public money. Wahl’s sources seem to be hinting that its main purpose as a coaching education hub will limit its efficacy as a training facility, an idea which on its face deserves deep skepticism and scrutiny.

No, the fact that bricks and mortar (and pitches for the national teams) are anywhere near the top of the Federation’s wish list is a real puzzler. Of the many areas in which US soccer is playing catchup in the world’s game, this is simply not one of them. Any elite soccer team on US soil – our national teams or otherwise – can drop in on world-class facilities in at least a dozen metropolises across this continent, and dozens more that are almost worthy of that adjective.

There are pressing shortages of field space in this country, mind you. Those aren’t the ones needed at the game’s upper reaches. They’re the truly tricky lifts, the “urban soccer deserts” if you will, where not only are more futsal courts and all-weather turf fields needed, but also the shoulder programming to make them truly efficient – community outreach, grassroots coaching, awareness-building and the like. There are still many rural areas – truly rural communities, not the exurbs where so many mega-complexes are cropping up – where soccer itself is still an outsider. It’s there where ambitious players struggle for a ladder to climb.

As others have readily noted, the soccer infrastructure that badly needs investment in America is not the directly physical kind.

The combined footprint of the professional and National Team scouting network here has grown significantly in recent years. It’s puny when compared, on an objective level, to the world leaders, or even the also-ran nations. The dogged problem of diversity and proportional representation of our massive, diverse population still needs solving. Too many facets of the game here lack the environments of keen competition and dynamic evolution that have fueled recent World Cup winners.

Gulati & company deserve credit for the decision-making that made this pile of cash. It’s far from a sure thing that the same degree of success will follow in the manner of its mobilization, however. It took a village, so to speak, to build this nest egg. Let’s hope the leaders involve the village in how to invest it.