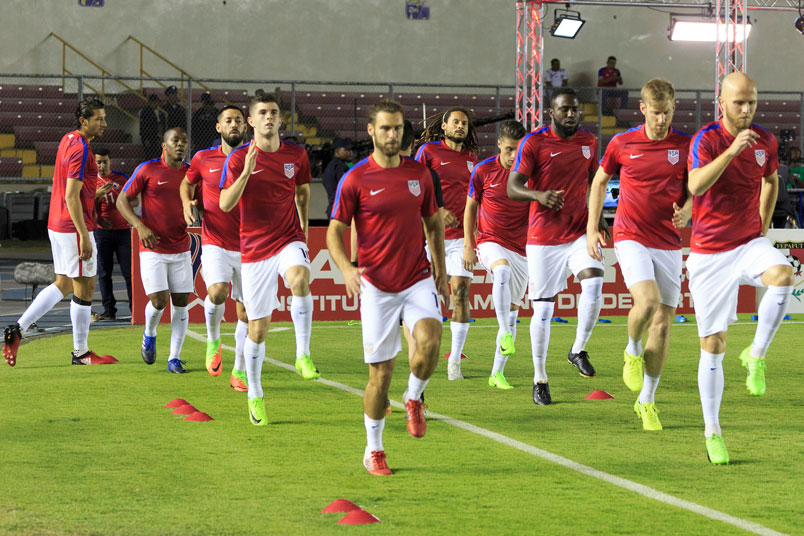 By Clemente Lisi – NEW YORK, NY (May 22, 2017) US Soccer Players – Another busy summer is starting Amid the scores of MLS matches and international friendlies on the soccer schedule, the USMNT will play some of their most important games of the year. Bruce Arena’s team will have to play at least nine matches over the course of two months. They could potentially add three more games to that growing schedule should the USMNT reach the Gold Cup final.

Depending on the type of game – friendly, World Cup Qualifier, or the Gold Cup – Arena will have to adjust his roster accordingly in pursuit of results. Experimenting will be a key component of the friendlies while games that really matter will need the reliability of veterans and player personnel Arena has used before. Asked about the team’s upcoming schedule, Arena was not shy about stating his objectives: “A perfect year is to qualify for the World Cup and win the Gold Cup.”

Both these goals are not only attainable, they’re expected. The firing of Jurgen Klinsmann last year when the US went 0-2 in its first two Hexagonal games left the team in a hole. Arena has slowly helped the team climb out of that hole, securing points at home and on the road. The new regime faces a tough test at Estadio Azteca on June 13 against Mexico.

Arena has been here before. In the 12 months leading up to the 2002 World Cup, He used friendlies as well as the Gold Cup to test the health of his squad. Arena’s team had picked up steam during Qualifying, while also using the 2002 Gold Cup, played during the winter that year. That helped him decide on his final 23-member squad for Korea/Japan. That US team ultimately reached the quarterfinals, the USMNT’s best finish at a World Cup in the modern era.

This year’s World Cup run-up features tasty friendlies such as the July 1 game versus Ghana in East Hartford, CT and the Gold Cup opener a week later versus Panama in Nashville. Here are three issues Arena will need to juggle in order to achieve success this summer.

This will be a period where Arena will like to bring in some fresher faces to compliment stalwarts like Tim Howard, Michael Bradley, Jozy Altidore, and Clint Dempsey. With this many games to play, depth is key. The specter of injury could also reveal itself to be a problem. Therefore, Arena’s experience scouting talent will be an essential part of what goes on this summer.

Dual nationals will once again help fill the void. Arena will likely test out new Americans with Major League Soccer pedigrees. Sporting Kansas City’s Dom Dwyer is a newly-minted US citizen and he hasn’t been shy about wanting to play for Arena since acquiring that US passport in March. The 26-year-old striker has played for Sporting KC since 2012 and in that time revealed to be one of the league’s marquee players.

In addition to Dwyer, Arena could also call up Kekuta Manneh. The Columbus Crew striker was part of Arena’s January camp, but the Gambian-born player has yet to earn a cap. Like Dwyer, the 22-year-old came to MLS via the SuperDraft and became a citizen this past December. It will be interesting to see what Arena decides to do with these two players, although spots on the Gold Cup roster appear to be a very likely outcome.

Use the right formation

Arena has plenty of attacking options. It’s a luxury all coaches would love to have in theory. In practice, it means deciding who will regularly spearhead the attack. This decision could be the difference between qualifying for Russia 2018 or missing out on the World Cup. It’s one that needs regularity.

The US’s cathartic 6-0 romp of Honduras at Avaya Stadium in San Jose this past March highlighted the strength of Arena’s frontline. His 4-4-2 formation featured a rejuvenated Dempsey, who scored a hat trick in that game, and Altidore up front. Behind them as a central attacking midfielder was 18-year-old Christian Pulisic, the best player in the lineup that night. He displayed a maturity and skill level that bodes well for him and the team’s future.

Should something happen to any of these three players, Arena will need to show some tactical flexibility. He could opt for the same diamond-shape midfield we saw against Honduras and give Bradley more of an attacking role. That has been a heavy lift as of late for a player who excels as a defensive midfielder. It’s more likely Darlington Nagbe gets that spot, a player who fell off Klinsmann’s radar screen that Arena very much likes. In addition, Arena could opt for a 4-3-3, used effectively at last year’s Copa America Centenario, with Bobby Wood (should he be healthy) as a winger.

Get points on the road

This could be the USMNT’s toughest task during its upcoming stretch of games. The Americans will play just two road games, but they’re against Mexico and Honduras. US Soccer’s ability to schedule friendlies on American soil that mimic the conditions the Americans will face on the road should be of great help.

Three days before taking on Mexico, the US takes on Trinidad & Tobago in suburban Denver. Why there? Not only does the US need to pick up points in order to climb the Hex standings, Dick’s Sporting Goods Park in Commerce City is also 5,200 feet above sea level. Playing at altitude will certainly help Arena’s player acclimate to the conditions they will face in Mexico City. It is also no coincidence that the June 3 friendly versus Venezuela is setfor Rio Tinto Stadium in Sandy, Utah. That venue is 4,450 feet above sea level.

Both these stadiums also happen to be the home of MLS teams. That’s something Arena said recently was the way to go when it came to World Cup Qualifiers. The Gold Cup, meanwhile, is using both MLS and NFL-style venues. Nonetheless, the US still has home-field advantage at the Gold Cup and will only see that support eclipsed should it face Mexico in the final on July 26 at Levi’s Stadium in Santa Clara. At that point, we will know how this summer is going for the USMNT.