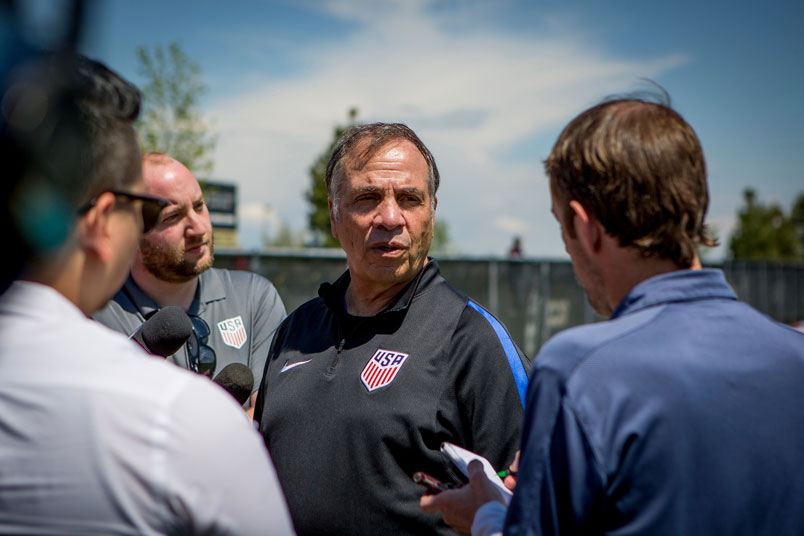 By Jason Davis – WASHINGTON, DC (Jun 7, 2017) US Soccer Players – Bruce Arena is not Jurgen Klinsmann. If their considerably different builds, accents, and attitudes weren’t evidence enough, there’s the distinctly divergent ways the two men see American soccer and their respective custodianship of the United States Men’s National Team. That’s somewhat in opposition to their general dispositions. Klinsmann is the bubbly talker. Arena is the terse, sarcastic curmudgeon. That switches when it comes to viewing the condition of soccer in the US through mostly negative (Klinsmann) and largely positive (Arena) lenses.

Klinsmann was a USMNT coach with strong ideas about how American soccer could and should improve. Those ideas often clashed with the people in charge of the existing structures throughout the game. Arena, though probably not deluded about where American soccer sits in relation to the rest of the world, believes the tools and knowledge already exists in the country to push to a higher level.

Against that backdrop, we have the latest salvo from Arena in the direction of his predecessor. It seems that the new/former USMNT head coach can’t help himself when it comes to commenting on how Klinsmann handled the operation of the senior national team. With the United States heading toward two qualifies against Trinidad & Tobago at home and Mexico on the road, Arena expounded on how Klinsmann’s selection policies make his job more difficult.

In comments to Goal.com, Arena questioned the consistency of the player call-ups prior to his arrival. Pointing to the sheer numbers of players tapped for national team duty, Arena flatly stated that the situation was “confusing”. Too many players playing too few games made for a difficult evaluation process. “Rhyme and reason” were missing. Arena’s goal was to find them, presumably for the betterment of the team.

Arena specifically identified a pair of European-based players in what is probably the USMNT’s deepest position, defensive midfield. He questioned pulling names like Danny Williams and Alfredo Morales into the team on a sporadic basis.

We need to make it clear that at no point in his comments as reported did Arena mention Klinsmann by name. Whether it was intentional or not, the choice to address player selection under previous leadership without actually identifying that leadership seems odd. If it was some nod to professional courtesy, it didn’t play that way.

The natural question that drips from Arena’s words as they hang in the ether is whether or not the assessment is fair. Certainly Klinsmann cast a wide net in the search for players who could help the national team during his five years on the job. While that’s easily explained as a worthwhile effort to plumb the depths of the player pool, a lack of camp-to-camp consistency was one of the leading criticisms while Klinsmann was on the job.

Klinsmann was very publicly castigated for his choices, even by members of the player pool. Sporting Kansas City midfielder Benny Feilhaber, a player who fans believed Klinsmann looked over to the detriment of the team, said that the head coach at the time didn’t call in “the best players available to him.” While Feilhaber had an obviously interest in Klinsmann’s choices and may have been betraying his bias with his analysis, the wasn’t the only one to wonder about roster selection.

Feilhaber also questioned Klinsmann’s view of MLS. He wondered aloud if the coach was passing on qualified players (in addition to himself) like Dax McCarty, Sacha Kljestan, and Matt Hedges simply because they played in MLS.

All three of those players have received call-ups under Arena in the short time he’s been on the job. Both McCarty and Hedges are part of the current USMNT roster that will play those two crucial qualifiers in the coming week.

Arena himself picked out an MLS name when suggesting that he’s not against introducing new players, no matter his feelings on consistency. Arena identified LA Galaxy midfielder Sebastian Lletget, injured in his last National Team appearance and out through the summer, as a new face in the team since he came aboard.

The successful MLS coach and staunch advocate for the quality of the domestic league does appear to be consciously reversing course. Arena’s view of MLS differs so much from Klinsmann’s that he’ll likely face the opposite criticism. Does he favor MLS players over foreign-based ones? Of course, that criticism depends on results.

Despite Arena’s view of the turnover in the team, he felt fit to recall a host of names who hardly got a look under Klinsmann. On some level, that undermines Arena’s message, even if he’s simply hitting the reset button and pulling in his preferred group.

Is Arena’s view of the previous regime’s selection accurate? Klinsmann’s record is a mixed bag, which doesn’t necessarily push conclusions in either direction. For every good period he had in charge, the USMNT would go through a difficult stretch that led to historic losses. Some of that may have been due to too much roster turnover. It’s difficult to know for sure. Alfredo Morales and Danny Williams being in the team once or twice over two years didn’t directly lead to the Americans losing to Jamaica at home for the first time in history or collapsing so dramatically against Costa Rica. The core of the team under Klinsmann largely stayed the same over an extended stretch.

What is most troubling about Arena’s comment is the idea that he’s loading in excuses for any trouble the USMNT has going forward in World Cup qualifying. Additionally, Arena can often come off as overly concerned with Klinsmann when he has the pressing business of winning games at hand. Rare is the coach who takes over with a program in excellent shape, especially when the previous coach lost the job. If Arena has issues with the way Klinsmann left things, his opinion is best kept behind closed doors.