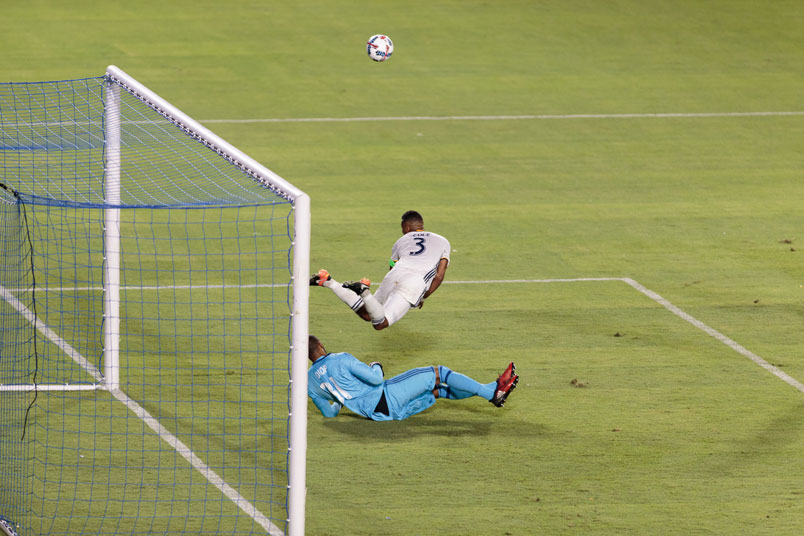 By Luis Bueno – RIVERSIDE, CA (Jun 28, 2017) US Soccer Players – Since the start of the Major League Soccer, the LA Galaxy has been the most relevant team in California. Mostly, anyway. There was a time when the San Jose Earthquakes had more championships than the Galaxy and was winning them at the Galaxy’s expense. Outside of the early part of the last decade, California has long been the Galaxy’s domain. That could begin to change in the span of a few days.

The Galaxy will play two California rivals. Both would like to see LA taking a step back regionally. In a transitional season for the Galaxy, their nearest opponents sense weakness, and for good reason.

Losing to the Sacramento Republic and San Jose would be a crushing one-two blow for the Galaxy. Avoiding that would build confidence while sending a clear message to clubs in the state of California.

Achieving success with instate rivals is important and will be much more the norm in coming years. With LAFC entering the league and both Sacramento and San Diego eyeing entry into MLS as expansion cities, California could have five MLS teams in the not-too-distant future.

The Sacramento Republic already has a fervent fan base providing incredible support. Even though the club plays in the USL, Sacramento regularly sells out or comes close to selling out its 11,442-capacity stadium, Papa Murphy’s Park. The club’s momentum for an MLS expansion bid is at full steam. The club has an initiative dedicated to sealing up an expansion bid. The so-called #BringItHome series is drumming up local interest, gathering input from fans with what a potential MLS stadium would feature, and the kind of support fans could and would offer if and when the team joins MLS. That’s a lot of “woulds” and “ifs,”” but that’s the situation for an expansion candidate.

Beating an MLS opponent is something the team had not done before this month. They advanced in the US Open Cup with a 4-1 home win over Real Salt Lake. By USL standards, that’s a giant slaying. They’ll need another against the Galaxy and they’ll need to do it on the road.

It’s a fair point that Sacramento beating LA would be the biggest night in Republic history. That scenario on the other side of the ball is nothing new for the Galaxy. Every time the Galaxy plays an MLS match, the club lines up against a rival envious of the LA trophy cabinet.

The Galaxy must not take the Open Cup match lightly. Sacramento and LA Galaxy II have had ongoing battles over the years. Just last Saturday, Sacramento took a 3-2 result from their match at StubHub Center’s Track and Field Stadium, the same location for the Open Cup encounter. That’s not something the senior side needs to see repeated.

Saturday is a return to MLS play for LA and another California derby. This trip to play the Earthquakes means Stanford Stadium rather than Avaya Stadium. This is the annual game in the bigger stadium with expectations of over 50k showing up. San Jose has had success there against the Galaxy, winning three and drawing another in their four meetings there.

Over the years each side has dealt significant blows to the other. San Jose beat the Galaxy in the 2001 MLS Cup and knocked the Galaxy out of the 2003 playoffs. The Galaxy toppled San Jose in the playoffs in 2005 and 2012 en route to MLS Cup titles of their own.

Outside of California, few consider the Galaxy vs San Jose rivalry to be among the top in MLS. Fair enough, but that doesn’t change the animosity between the two. Southern California fans and Northern California fans have disdain amongst one another across all sports, with the Los Angeles Dodgers and San Francisco Giants’ rivalry highlighting the SoCa-NoCal sports hatred for one another.

It’s a crucial time for the Galaxy, something that doesn’t change with the ebb and flow of the MLS regular season. They’re playing a relevance game in a short time frame. Any setback could be the one that becomes crucial in the near future. There’s a lot at risk every time this team takes the field, whether or not they want to acknowledge it.

We already know the LA derby will return with LAFC. Certainly LAFC could create an arms race with incoming talent. Having rivals in the Bay Area, the state capital and even down the I-5 would only add to that pressing need for the Galaxy to stay relevant.