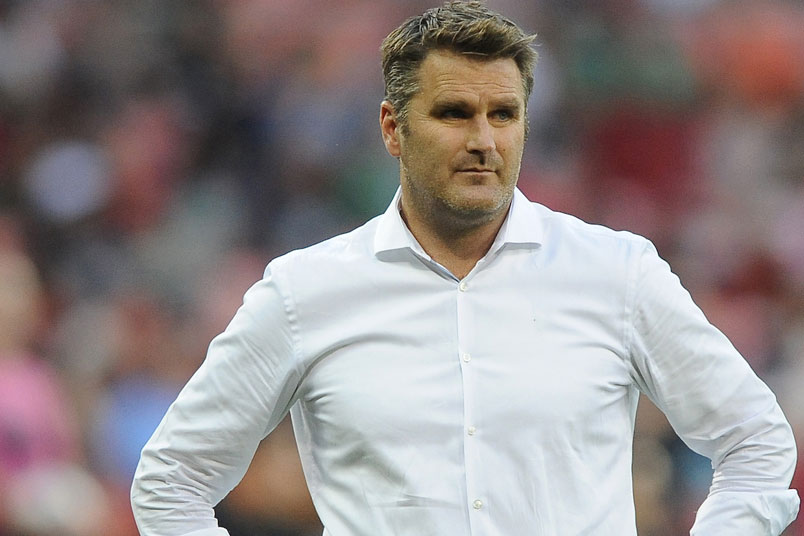 By Luis Bueno – RIVERSIDE, CA (Jun 14, 2017) US Soccer Players – Bruce Arena’s shadow looms large over Curt Onalfo. The new LA Galaxy coach has tried to do his best to focus on the present without looking to the past. How he handles the Galaxy over the next few weeks will determine if others will stop looking at the past as well.

The Galaxy will play their busiest stretch of the year, beginning with Wednesday’s US Open Cup match against Orange County SC. That match is the first game in a 21-day stretch that will see the Galaxy play six times, seven if the Galaxy beats Orange County SC.

Each result brings scrutiny of every decision Onalfo makes from starting lineups, to substitutions, to tactical formations. While decisions like that are commonplace for coaches, to have the calendar as compressed as it is will only intensify the analysis.

The next few weeks are critical for the Galaxy’s 2017 hopes. The club can be out of the Cup and out of contention in the league over this run. Each game raises the stakes, with the Galaxy needing results in a critical time for the club.

Onalfo appeared to have righted the early-season wrongs with a successful road spell. The club is once again within shot of playoff contention but more importantly looks like a playoff contender. Injuries and player absences have hurt the team but Onalfo has pulled the right amount of strings to show true progress. For a club that had a massive turnover with the roster and coaching staff, that has been impressive.

How the Galaxy move forward into the meat of its schedule will once again rest solely on Onalfo’s shoulders. What he considers important or significant will have an impact on roster choices and could set the team up for success or failure.

Onalfo’s first knockout-round competition with the Galaxy will unfold when the club faces off against Orange County SC. At a glance it seems this match is no more or less special than your typical Open Cup match. Some second or third-tier side filled with never-have-beens and up-and-comers trying to upstage the five-time MLS Cup champs.

While that’s true to an extent, this one has a bit more significance. Orange County SC is an affiliate of LAFC, the same LAFC that will begin play in 2018 and will immediately set off a rivalry that has long been missing from the Southern California soccer scene.

That sense of rivalry may begin here, and if it does, it may influence lineup choices. The Galaxy’s depth though does not allow for too much leeway. For Saturday’s match against Houston, the Galaxy will not have Gio Dos Santos available. Dos Santos is in Russia with the Mexican National Team and will be gone at least until mid-July. The Galaxy is already down key players such as Sebastian Lletget, Baggio Husidic, Daniel Steres, and Brian Rowe.

Placing too much emphasis then on beating an affiliate of LAFC could have repercussions ahead of Saturday’s league match. There’s something else that could guide Onalfo’s hand.

Winning a US Open Cup title is not the same as winning an MLS Cup title but it would be a championship. The Galaxy prides itself on championships. The club regularly points to the 2001 US Open Cup title as a legitimate piece of hardware, which it is. That championship was the first-ever domestic title in Galaxy history. It came one week after a rough loss to rivals San Jose in the 2001 MLS Cup. The win may have helped the Galaxy the following year, when the club won its first MLS Cup title after losing the final on three previous occasions.

A championship would be something tangible for Onalfo to point to that would lend to a successful year no matter how the regular season turned out. The Galaxy has won two Open Cup titles. Winning a third and qualifying for the CONCACAF Champions League would be an accomplishment to be proud of.

Should it come at the expense of the regular season? While that is a question often asked of MLS clubs during their respective runs at the US Open Cup title, that will be a fair question to pose if the Galaxy wins this match. Squeezing in another midweek match during the Galaxy’s insane upcoming schedule could be catastrophic. The Galaxy would have midweek matches the next four weeks, culminating with a July 4 home match against Real Salt Lake. Any significant injuries in that stretch would put more strain on the team as it plows through the Open Cup.

The Galaxy developed a rhythm and regained its swagger in May. A come-from-behind 2-2 draw against Chicago sparked a three-match winning streak and the Galaxy will enter its game against Houston with a six-match unbeaten run. What makes that more impressive is that the last four games all came on the road. The Galaxy now owns the league’s best road record, scoring 11 goals in four games before a scoreless draw against DC United last time out.

That rhythm will surely become a bit disjointed now if only because the Galaxy will be unable to practice regularly. Midweek games rob the Galaxy the ability of planning a full week of practice sessions. That allows for not only rest and recovery, but time for players to continue learning the nuances of Onalfo’s tactics.

If the Galaxy can maintain a solid rhythm, then those missed practices will not hurt the team as much. Any sort of setback could cause the team to spiral.

Onalfo will earn his salary in June and July. If the team comes out on the other end of the Gold Cup break (no regular-season MLS games between July 6 and July 19) while still in contention in two competitions, then Onalfo will have done something right. If not, the scrutiny will only intensify and that Arena shadow will only loom larger.