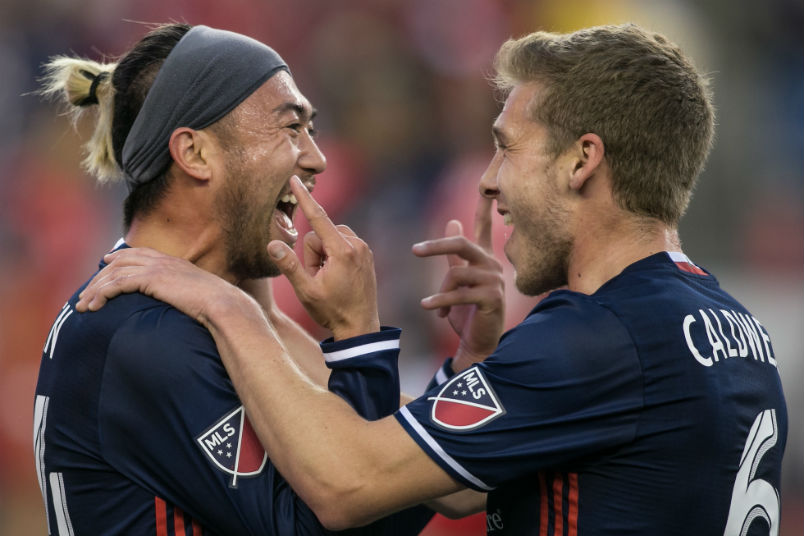 The stories in week 16 of the 2017 MLS season were teams coming back at home and more shutouts. The shutouts started with Friday’s game. Portland shutout San Jose 2-0 at Providence Park. San Jose went down a man with a second yellow to Darwin Ceren in the 37th minute for unsporting behavoir. Diego Valeri put the Timbers up in the 50th minute and scored again four minutes into stoppage time. Jake Gleeson only needed one save for the clean sheet.

“Portland’s a good team,” San Jose forward Chris Wondolowski said. “I want to credit them for the win. But yeah, any time you go down a man, especially here in Portland where it’s already a very tough place to play and the crowd is boisterous, it’s a turning point. I don’t want to say it’s the reason, but it’s a big play.”

Saturday’s schedule started with NYCFC coming back to beat Philadelphia 2-1 at Yankee Stadium. Fabrice-Jean Picault put the Union up in the 69th minute. Maxime Chanot equalized for New York in the 80th with Alexander Callens scoring in the 85th.

Vancouver came back at home to beat Atlanta 3-1. Greg Garza put United up in the 7th minute with Kendall Watson equalizing in the 31st. Watson scored again in the 44th. Fredy Montero added a third goal for the Whitecaps in the 68th minute.

“You know, the front forward they had today, we knew he would cause us problems and I think you saw in the first 10 minutes we were a little bit disjointed,” Vancouver coach Carl Robinson said. “We gave away a silly goal, a good goal on their behalf. They caught us in the transition, we didn’t recover properly and the fullback taps the ball in at the back post. I thought, character wise, from the first goal we conceded, we responded very well. We kept ourselves calm, we didn’t get caught up. You know, it’s easy when you’re at home to play ‘gung-ho’ and if you do that against them, they pick you off because they are really excellent with the ball. I thought it may come down to set pieces and I was right.”

New England shutout Toronto 3-0 at home. Benjamin Angoua scored in the 17th minute with Diego Fagundez doubling the lead in the 66th. Agudelo assisted on the Fagundez goal and scored his own in the 85th. Cody Cropper kept the clean sheet with three saves.

“There was too many things that was disjointed on the night to go in guns blazing,” Toronto coach Greg Vanney said. “You can tell there was some fatigue that set in. You know when the ball bounces twice off the crossbar and they head it in, when we miss some close chances, hit the bar a couple times, sometimes it’s just not your night. And sometimes the team is a little disjointed because of various reasons like fatigue, so it happens.”

Eight goals at Toyota Stadium with FC Dallas beating Real Salt Lake 6-2. Dallas started with a first-half hat-trick from Roland Lamah, scoring in the 8th, 22nd, and 31st minutes. Maxi Urruti added a goal in the 39th with Tesho Akindele making it 5-0 Dallas in the 43rd. Omar Holness pulled a goal back in the 70th with Kyle Beckerman scoring for Salt Lake two minutes later. Jesus Ferreira scored Dallas’s sixth goal in the 89th.

“We are very happy because it was truly a magical night for the club,” Dallas coach Oscar Pareja said. “So many positive things happened, the 1,000th goal for the club, Lamah’s hat-trick that brings a lot of confidence for him and the team because we know he can help us with scoring. Ferreira’s debut and goal, and Victor’s 100th game, and he did it as the captain.”

Colorado came back to beat Columbus 2-1 at Dick’s Sporting Goods Park. Federico Higuain put the Crew up in the 61st. Kevin Doyle equalized for Colorado in the 80th with Alan Gordon scoring their winner in the 86th.

On Sunday, Orlando and Chicago finished scoreless at Orlando City Stadium. Joe Bendik made six saves for Orlando City, who went a man down in the 26th when Rafael Ramos saw red for violent conduct. Antonio Nocerino followed in the 66th, leaving Orlando with nine men.

Week 14 ended in Seattle with the Sounders shutting out Houston 1-0. Will Bruin scored in the 69th minute with Stefan Frei keeping the clean sheet with three saves.