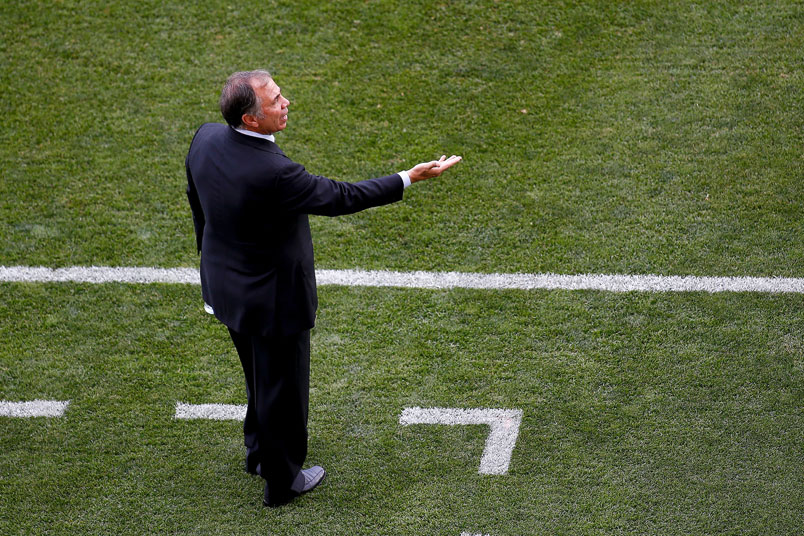 By Charles Boehm – WASHINGTON, DC (Jun 9, 2017) US Soccer Players – The USMNT continue to shift through the gears under Bruce Arena. Thursday night’s 2-0 win over Trinidad & Tobago set the team up well for Sunday’s much anticipated grudge match against Mexico at Estadio Azteca.

Bruce Arena will be happy to have bagged three points while building momentum for the weekend’s clash. It’s a showdown that’s always circled on the calendars of both parties in the border rivalry. Christian Pulisic proved his quality yet again, deepening the appreciation of teammates and fans for his rare talents. Meanwhile, the entire squad provided a sturdy platform for his star turn.

“Mexico has had an outstanding start to the Hex. They have a great team,” Arena told reporters postgame at Dick’s Sporting Goods Park in Colorado. “We all know that playing in Azteca is very difficult, especially with the altitude. I think we the three points tonight, we can have a good tactical approach, and can come out of there with at least a point.”

Sunday presents a much stiffer challenge than Thursday in every measurable way. It’s also happening on shorter-than-usual rest. That’s thanks to the agreement to move up the game to allow Mexico to depart for the Confederations Cup in Russia. Regardless, the USMNT is in good shape to get a result. Here’s a few thoughts on why and how.

Trinidad & Tobago carried a woeful history on US soil into the World Cup qualifier at Dick’s Sporting Goods Park. T&T haven’t earned a point in this matchup and have to go back some two decades just to recall the last time they scored.

T&T set up intelligently on this occasion and made the Yanks sweat for their victory, providing a reminder of the range of pitfalls that lie in wait on CONCACAF’s qualifying road. In fact the hosts deserved to be trailing at halftime, after Kenwyne Jones’ open header slammed off the crossbar with Tim Howard exposed at close range.

The Soca Warriors’ resistance eventually brought out the Americans’ best, in Pulisic and Darlington Nagbe in particular. The flashes of combination play between that skillful duo and teammates like Jozy Altidore, Fabian Johnson, and Clint Dempsey were promising.

At the other end, Trinidad & Tobago’s ability to find space in transition, especially with quick switches of play, will give the US coaching staff fresh teaching points in final prep for El Tri’s menacing attack. If the Trinidadians finish last in the Hexagonal as most scenarios would suggest, it will stand as a sign of growth – albeit modest – in the quality of the CONCACAF region.

Arena is widely perceived to be a conservative, by-the-numbers coach. That reputation badly belies the extent of his bravery, adaptability, and pragmatic problem solving.

Facing an effectively must-win situation, he did not hesitate to roll out a technically-gifted, attacking-oriented lineup. He went with two strikers, three offensively-inclined midfielders, and only one defensive mid in Michael Bradley. It was nearly an identical approach to the one shown in last week’s warm-up friendly against Venezuela – despite the multitude of hiccups shown in that 1-1 draw.

Thursday’s game ended up being surprisingly – and perhaps dangerously – open. The tactic worked in the end. Even with T&T playing five in the back, space eventually opened up in the USMNT’s final third. Nagbe, Pulisic, Altidore, and DeAndre Yedlin exploited it to good effect on the two goals.

“We’re going to continue to need contributions from the entire group, and we’ve gotten that. We feel good about the direction we’re headed,” said Bradley afterwards. “And we’re excited for Mexico. To us, there’s no bigger game.”

Arena also seems comfortable with Yedlin and Jorge Villafana as his fullbacks. Both are eager and able to advance into the attack and help unbalance the opposition. Even if he decides on a more cautious approach in Mexico’s Distrito Federal, I suspect he’ll trust them with an adjusted tactical assignment rather than swapping in new bodies. That’s a sign of real progress at a traditionally problematic position for the Yanks.

The USMNT has options at Azteca

Confidence-building wins are great. The grizzled among us just had to smile at Pulisic genially predicting a win over Mexico in his postgame interview. It still seems quite unlikely that Arena will be so forward-leaning in the next game.

From the get-go, the simple physical reality of the quick turnaround suggests a significant degree of platooning. Arena said as much postgame in Commerce City.

“I think we have to see how our players recover,” he said. “We have a sense of where guys will be after this game tonight and realize we’ll need some new bodies on the field on Sunday. We’ve been training that way for the last week to 10 days. We have that plan in place. We might make a couple changes to that, but we’re pretty set on what we’re going to do on Sunday.”

Mexico’s skill on the ball, dynamic movement off it, and readiness to pour numbers forward will probably require some assistance for Bradley. I expect the USMNT to trot out in something like a 4-2-3-1, perhaps with Kellyn Acosta, Alejandro Bedoya, or Dax McCarty deployed alongside the captain for midfield durability. The three-man band ahead of them could look exactly like it did against T&T, depending on the physiological recovery process.

Though the Villafana-John Brooks-Geoff Cameron-Yedlin back four has taken shape nicely, Omar Gonzalez should play a role on Sunday. The Pachuca star knows the Azteca environment well. That’s not only from Liga MX visits but also as a towering figure in the 0-0 draw the Yanks scrapped out in their last qualifying visit four years ago.

A substitute against T&T, Bobby Wood has fresh legs for the draining task of the lone striker role. Altidore also remains an option. Could Jordan Morris get time in advanced midfield?

Some observers have wondered if Arena’s relatively withdrawal of Dempsey, which included some frustrated sideline reactions from a battle-tested veteran hungry to stay on the field, was a calculated choice to fire up the Texan for a supersub role in Mexico City. It’s speculation at this point, but wouldn’t be unwise or out of character from the coach.