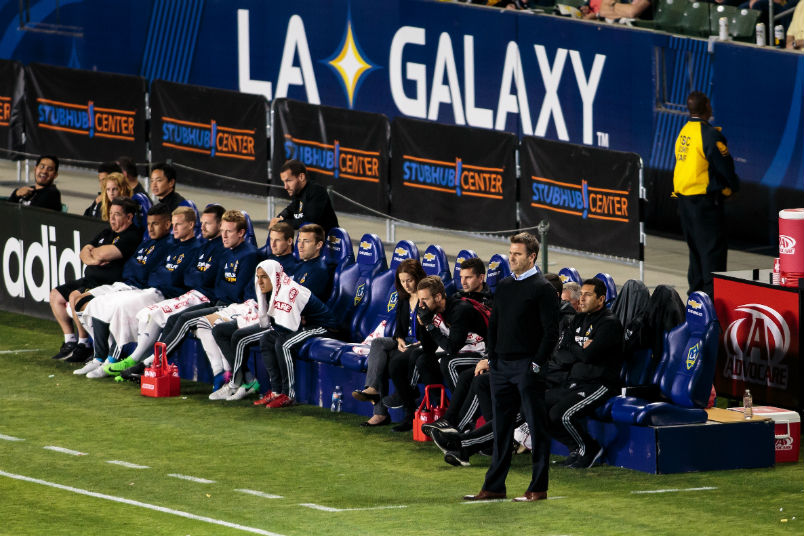 By Luis Bueno – RIVERSIDE, CA (Jul 5, 2017) US Soccer Players – The LA Galaxy had turned an important corner just last month. A rough season-opening patch seemed to have toughened up the team. The Galaxy won three consecutive road games and built up a seven-match unbeaten run. Having reached the midway point in the season, however, it looks like the destitute, effort-lacking collection of players and not the brash, confident group is the real Galaxy 2017 side.

The LA Galaxy hit the Gold Cup break with a three-match losing streak, the club’s longest of the season, and an embarrassing 1-5-3 home record. The club seemed to have hit rock bottom with its final match before the break, a 6-2 drubbing at the hands of Real Salt Lake. Those six goals scored account for more than one-fourth of the goals RSL has scored all season.

The Galaxy’s problems seemed to boil over in that Fourth of July defeat. The team has no reliable depth as that match proved. Gone were Gio Dos Santos and Gyasi Zardes due to international duty, Jelle Van Damme due to suspension and Jermaine Jones, Sebastian Lletget, and Baggio Husidic, among others.

The result was catastrophic. Young players such as Nathan Smith and Bradley Diallo are just not cutting it. The entire lineup against RSL looked like it could have passed as an LA Galaxy II squad.

That’s the problem. Onalfo came from the Galaxy’s USL side and coached all three of those players as well as others who have logged substantial minutes this season like Clement Diop and Jaime Villarreal. Having already coached those players before, it would seem that Onalfo would know how to pull the right strings with the group and get the team to perform in MLS the way he knows they can.

Few players are having standout individual seasons for the Galaxy. The few who are, namely Romain Alessandrini, did not come from Galaxy II. The reserve team’s returns have yielded little, which could bring to question the effectiveness of the Galaxy’s efforts to harvest and develop talent. It seems that if the Galaxy want to remain playoff contenders and want to have a legitimate shot at reaching another MLS Cup, the only way may be to continue importing top talent.

Whether or not Onalfo would be the man to guide that top talent and try to get the Galaxy back to contention remains an open question. Onalfo’s Galaxy sides have had several alarming performances, though. The team’s effort has come into question several times this season already. Tactics and lineup decisions are one thing, but effort is something that should be consistent from match to match. How a team looks reflects on the coach’s decisions but how a team plays reflects on the coach’s expectations and approach.

Onalfo’s philosophy has not yet carried over to the Galaxy. Halfway through the season the club appears to be, at best, a contender for the final playoff spot but still miles away from a championship contender.

The most troubling part is the Galaxy’s home record. In nine home games this season, the Galaxy has lost as many games as it did in the previous 63 regular-season home games. The Galaxy lost just once at home last year, twice the year before, once in 2014 and twice in 2013.

Aside from an injury-marred 2012 season, which still resulted in an MLS Cup victory, the Galaxy’s home record has been impeccable for a majority of its history. That season, the Galaxy went 10-6-1 at home. The Galaxy also had six home losses in each of the 2007 and 2006 seasons, which was during the lowest point in the club’s history and yet neither was a losing record. The Galaxy went 6-6-3 in 2007 and 6-6-4 in 2006.

This season could see the Galaxy set the club record for home losses. With five already in the books and games against Seattle, Toronto FC, NYCFC, and San Jose still looming the club could set that record before September.

Fortunately for the Galaxy, most of the Western Conference is also dealing in mediocrity this season. Eight points separate third-place Portland and last-place Minnesota. String together a few victories and any team could solidify its playoff positioning. At the same time though the Galaxy’s home issues point to greater problems. The Galaxy already had overcome home issues. Taking to the road and winning five games this season seemed to show the team’s mettle. But the true side continues to come out at home. The Galaxy has compiled just six points at home and is the only side in the league to have less than 10 points from all of its home matches.

On the flip side, the Galaxy also carries a league-high five road victories and a league-best 16 points away from home. That is the only thing saving the Galaxy, the way the team plays on the road.

Over the Gold Cup break, the team must find a way to take what is working on the road and replicate it at home. Part of that will come Monday when the Galaxy visit San Jose for the third time this year. This match though is part of the US Open Cup, a competition which could help Onalfo’s cause. A win would put the Galaxy into the US Open Cup semifinals. While nowhere near the significance of MLS Cup for the Galaxy, an Open Cup title would be a welcomed piece of silverware and get the club back into CONCACAF Champions League play, things the club takes seriously.

Perhaps a win there would help resuscitate the Galaxy’s season. The club returns to league play with three matches in a 10-day span, hosting Vancouver on July 19 and Seattle on July 29 with a trip to New England sandwiched in between.

We’re at the point where it’s a good question as to whether or not Onalfo will still have a chance at that point. The Galaxy need a defibrillator blast in its chest to get the season back to where it should be.