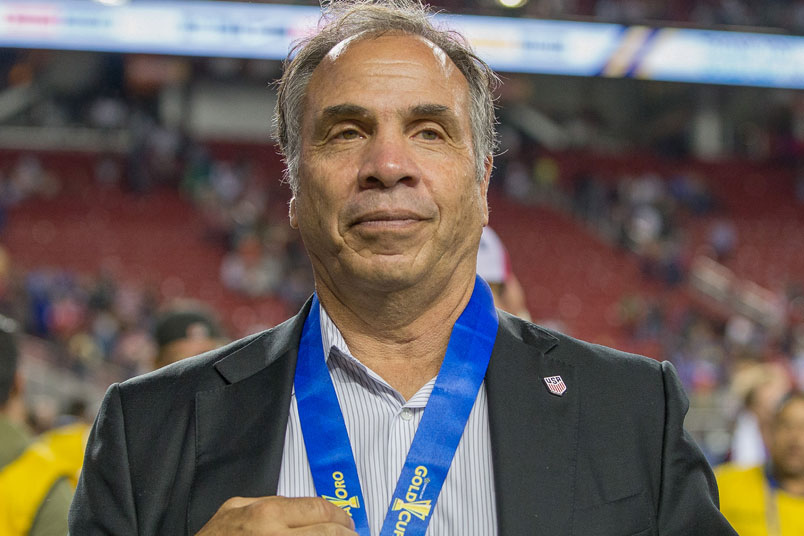 By Charles Boehm – WASHINGTON, DC (Jul 28, 2017) US Soccer Players – The USMNT are Gold Cup champions for a sixth time. It’s an accomplishment to celebrate, regardless of the misgivings surrounding this tournament. That much was clear to see on the faces of US players young and old as they hoisted CONCACAF’s hulking hardware at Levi’s Stadium late Wednesday night.

For Jordan Morris, it marks the latest in an impressive string of team and individual honors. From an NCAA national championship to MLS Cup to Gold Cup, all in less than two years. At the other end of the spectrum, it was Jozy Altidore’s first trophy won in US colors, and a particularly poignant milestone for Tim Howard.

“It’s hard to get the young guys to realize that this doesn’t always last forever. When I was younger and got to a cup final, I thought, ‘Ah, the next one’s around the corner,’” he said postgame. “And they’re not. This is sweet.”

The achievement also represents a step towards the 2021 Confederations Cup, should that event continue. Some media reports suggest that’s not a foregone conclusion. Even four years out, the Yanks are now in position to play the 2019 Gold Cup winner for the chance to represent CONCACAF in Qatar. That would be a useful experience by any measure.

All this has taken place with a bit less fanfare than their last Gold Cup triumph four years ago. Even Bruce Arena would probably concede that this month’s performances haven’t always been emphatic. Using the maximum of six roster reinforcements to call in veteran savvy after the group stage was something like a video game cheat code. The hefty role those six played in claiming the title may not necessarily bode well for the many others trying to use this tournament to earn a lasting place on the roster.

US fans and observers, yours truly included, are prone to overthinking things at this moment. This is not a condition that infects Arena, though. The most successful coach in US soccer history has reminded us yet again of how and why he’s reached those heights.

He entered this month with the twin goals of evaluating players and contending for a championship, and he moves into August with checkmarks next to both items. His win-loss record in his second stint in charge of the USMNT is now 9-0-5, encompassing positive – and crucial – results in World Cup qualifying as well as the Gold Cup trophy run.

As in his past, his teams don’t always play beautiful or dominating soccer. His public persona offers little of the glamor or drama exuded by the likes of Jurgen Klinsmann or Jose Mourinho. Arena just puts in the work, relentlessly and effectively, to maneuver his teams into winning positions and keep them there.

Before Wednesday’s final, he let slip that his depth chart runs 44 deep, that he plots out four full starting XIs to take stock of his player pool and plan for games. It might sound like a basic part of his job’s responsibilities. Still, consider the USMNT’s mighty struggles to fill the hole vacated when Altidore tore his hamstring in the first game of the 2014 World Cup. That’s one example suggesting that past regimes haven’t always followed suit.

This US Gold Cup squad wasn’t always spectacular. It was undoubtedly relentless. Some of the minnows and underdogs made things tough along the way, only to fall one by one by a sturdy collective that did not lose sight of the bigger goals.

Ecclesiastes 9:11 famously reads, “the race is not to the swift and the battle is not to the warriors, and neither is bread to the wise nor wealth to the discerning nor favor to men of ability; for time and chance overtake them all.” Woody Allen phrased a similar idea less eloquently but just as memorably by saying that “80 percent of success is showing up.”

In barely half a year on the job, Bruce Arena has restored the program’s collective confidence, charted a steady course for Russia 2018, and added to the trophy cabinet. He’s made life simple and understandable for his players and difficult for his opponents. Questions remain about the team’s full potential, and their ability to reach it in the big games awaiting in the year ahead. Yet even asking those questions is a tribute to the good work Arena is already doing.