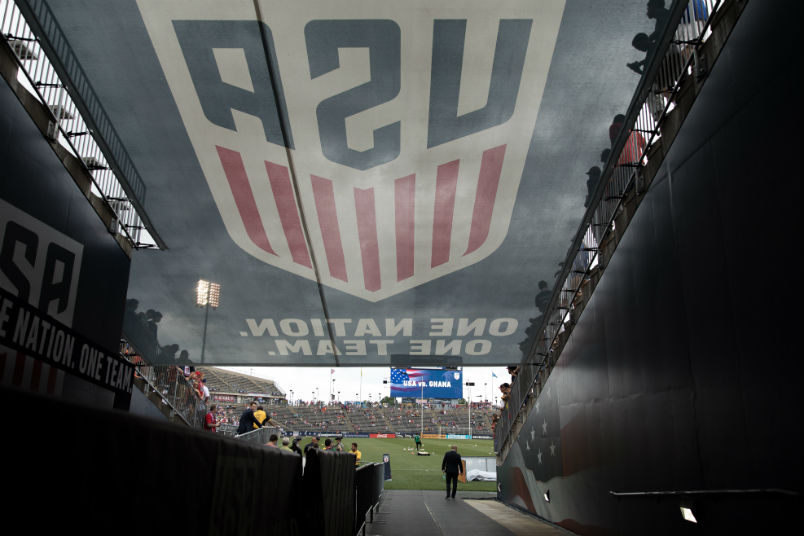 By Clemente Lisi – EAST HARTFORD, CT (Jul 3, 2017) US Soccer Players – The start of a major tournament such as the Gold Cup is a great time to take the National Team’s temperature. Along with Mexico, the United States has dominated the continental competition since CONCACAF re-branded it in 1991. With the Gold Cup semifinal loss to Jamaica two years ago still fresh on the minds of many, anything short of lifting the trophy this month will disappoint some fans. US coach Bruce Arena has said that winning the Gold Cup is one of his objectives this year.

That said, it isn’t easy to measure the USMNT’s strength with the roster Arena selected for this tournament. Resting key starters, it will be interesting to see who on this team can break through and earn a spot going forward. This tournament is also ripe for the Americans to win. Still on a high following their recent surge up the Hexagonal standings, Arena has brought with him a winning mentality and a lineup eager to do him proud during the spate of recent World Cup qualifiers. The vibe has been good in the dressing room and on the field. This Gold Cup will give Arena the chance to continue that process with a different group of players.

Saturday’s friendly versus Ghana resulted in a 2-1 victory for the USMNT at Pratt & Whitney Stadium in East Hartford, putting on some pre-Fourth of July fireworks ahead of this Saturday’s Gold Cup opener versus Panama in Nashville. It also demonstrated a series of positives. Above all, Kellyn Acosta’s well-played free kick for what turned out to be the winning goal and his effective pairing in with Dax McCarty in central midfield. Players like Acosta and McCarty, MLS stars who are fringe National Team players, know that a good showing this month may get them a spot at the World Cup.

“It was the first time that a lot of these players had played together before,” Arena said of the lineup that played Ghana. Here’s a look at three reasons why the US can finally win back the Gold Cup.

Optimism in the USMNT camp is running high. Arena’s tactical decisions have worked with the results proving him right. That’s all good given where this team was not long ago. Getting points at home and the road draw against Mexico last month have done a lot to move past that ominous 0-2 start in Hexagonal qualifying.

This Gold Cup is all about building momentum for Arena. Leaving regulars at home gives Arena the chance to assess new talent. It also gives MLS players another chance for them to make an impression. The Gold Cup could see the US play as many as six games this month. That’s a lot of matches to scout talent for the future. Nevertheless, given the level of competition at the Gold Cup, this fresh-faced US team could put together a winning effort should the players maintain the type of chemistry we saw versus Ghana.

“A lot of things can happen coming out of the Gold Cup, especially when the World Cup is a year away,” Arena said. “So this is an important tournament for the players.”

That gets us to the second point. With several key qualifiers on the horizon and the World Cup a year away, the Gold Cup will test the depth of the player pool. And boy, is the pool deep. With no Christian Pulisic on the roster, Dom Dwyer, the English-born striker who became a US citizen this past March, figures to be a starter. Should Arena go with a 4-4-2 setup, New England Revolution player Juan Agudelo could join Dwyer up top. The duo could make for an interesting combination up top. The other option, as we saw versus Ghana, is to utilize a 4-5-1 formation with Joe Corona behind Dwyer. That combination also worked to great effect.

Another fascinating addition (although a largely unknown quantity to most fans) is midfielder Kenny Saief. He’s spent the past three seasons playing for KAA Gent in Belgium and could give this team that offensive boost needed against tougher sides as the tournament wears on. He can play both in the middle and on the wings, a versatility that will come in handy off the bench.

It’s this competition for roster spots that will make the audition process fun to watch, while transforming this group into a more competitive unit.

Mexico lost 4-1 by Germany’s “B” squad last week in the semifinals of the Confederations Cup. The team El Tri coach Juan Carlos Osorio called up for the Gold Cup is exclusively Liga MX players. Osorio has come under considerable pressure from the Mexican press and fans for rotating his lineups with each passing game. He’s largely attained the results, it’s the manner in which he’s gotten them that’s turned off a country that loves its futbol and to criticize coaches.

All this, of course, is a plus for the United States. Mexico might not necessarily have anything to prove with an all-Liga MX lineup, but that doesn’t take away from the players on the field. There’s also Osorio, who doesn’t need the criticism that would come with a lackluster showing. It’s a hedged bet, one necessary because of the schedule. This is still Mexico and this is still CONCACAF.

Should the final be USA-Mexico as many predict, it will be fun to see if this mostly-MLS squad of players can outdo a group of Liga MX stars. For now, Arena’s men need to focus on themselves and the belief that they can win it all.

Major League Soccer has adopted the transfer strategies of a selling league and the USL Championship may be in a position to do the same.

Jordan Morris and Aaron Long lost months and the 2021 World Cup qualifiers as they recovered from injuries with both now in camp with the USMNT.