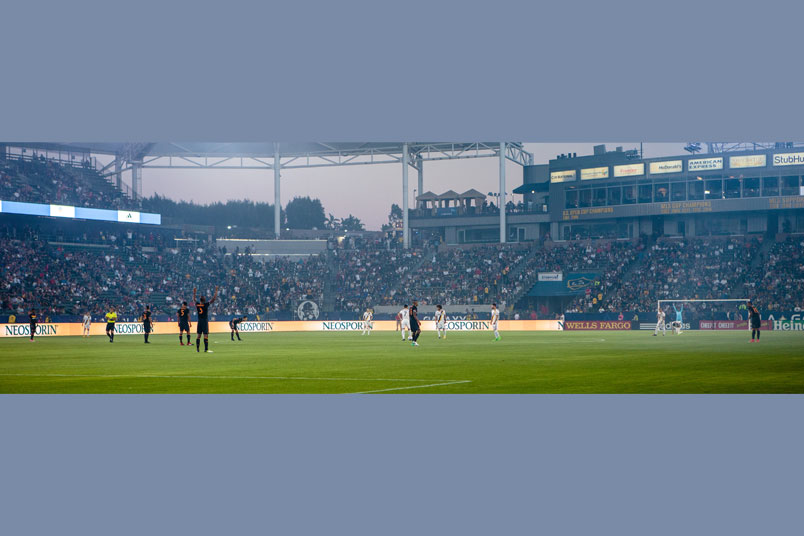 By Luis Bueno – RIVERSIDE, CA (Jul 12, 2017) US Soccer Players – In the early days of Major League Soccer, gimmicks abounded. Part of the thinking then was that both soccer and non-soccer fans needed some sort of reason to pay attention to the fledgling league. Perhaps that was the right mindset to take in 1996. this league has grown quite a bit since and some of those gimmicks need to go by the wayside. Namely, midseason friendly matches need to disappear.

The LA Galaxy will play Manchester United on Saturday at StubHub Center. Every summer, when the Galaxy participates in these friendlies, the club faces the same obstacle. These games serve zero competitive purpose and in fact can become a setback. They only add to a congested schedule and force the coaching staff to divert resources to an exercise that is utterly meaningless.

Back in the 1990s, MLS needed a way to attract fans. Teams like the San Jose Clash or Dallas Burn had no history to draw from. Excitement about a top-flight professional soccer league in the United States was the main selling point but club and league executives needed to find ways to get people to buy in.

Name players, however old they were, littered rosters across the league. This was the era of the shootout and the college-style clock that signaled the end of a half after exactly 45 minutes. Doubleheaders featuring MLS teams and international teams were on the schedule. The Galaxy and Tampa Bay Mutiny played in front of some 92,000 at the Rose Bowl in 1996. While impressive, the stadium was full because of the other part of that doubleheader was USMNT vs Mexico.

Those types of events helped give soccer fans a way to sample MLS and build up a team’s fan base. Eventually, the landscape transformed as top international clubs realized how lucrative it was to play friendly matches in the United States. MLS tapped into that as well and the MLS vs Top international club friendlies became the norm.

At one point, it was a hot ticket. When the Galaxy hosted Real Madrid in 2005, the match sent a buzz throughout Southern California. In retrospect, that may have been mostly because of the roster Real Madrid had at the time and not the club itself. After all, players like Zinedine Zidane, David Beckham, Ronaldo, Michael Owen, Luis Figo, Roberto Carlos, and Iker Casillas would be a treat to watch in person no matter the situation. The Galaxy playing against Real Madrid was a treat back then. Now?

Sure, the Galaxy’s match against Manchester United will likely sell out. People will have a good time watching one of the world’s best known clubs. But the Galaxy stand to gain little and lose a lot, on the soccer side of it anyway. The Galaxy limp into this match, nursing several key injuries and will feature players who are just returning from injury or international duties. The game is in between an Open Cup match and a regular-season game. It’s five days after an intense Open Cup match and four days before a critical Western Conference matchup against the Vancouver Whitecaps.

Following another trend with MLS teams in these games might not work for the Galaxy. If they field a second-choice lineup they risk embarrassment. Run out the starters for 90 minutes in a meaningless game only to force them to come right back on Wednesday and again the following Saturday for games that really matter?

The match still serves a purpose on the financial end though. Tickets for this match started at $89 and went for as high as $550. The haul stands to be fairly lucrative for the Galaxy, and thus the games will continue for as long as the market supports them.

From a playing perspective, they’ve already outlived their usefulness. European clubs can come play stateside against one another all the want. Same with Mexican clubs. Fans will turn out for those matches. Liverpool vs Chelsea drew 53,117 last summer on a Wednesday night at the Rose Bowl. PSG and Leicester City sold out StubHub Center a year ago.

Those matches should continue on their own and not involve MLS teams any more. if MLS teams still want a piece of that action, then bring back the doubleheader. That would not force the Galaxy or any MLS team to alter lineups or add to an already jammed schedule and would provide for a day full of soccer. That would include one game that counts.

MLS teams do not need to showcase themselves against international clubs. Any down time clubs have over the summer should be for rest and preparing for the grind that the stretch drive always becomes. That’s the better choice than wasting energy on something that only worthwhile financially.