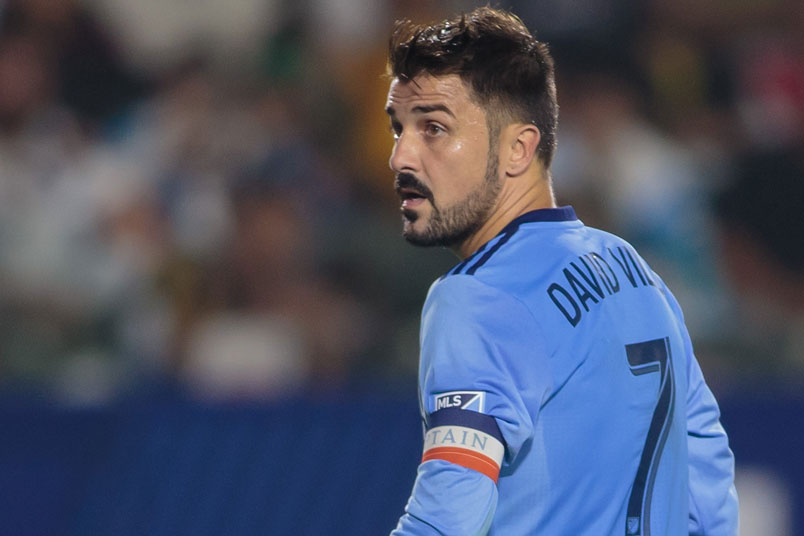 By Jason Davis – WASHINGTON DC (Aug 30, 2017) US Soccer Players – It’s an endless quest to prove to anyone and everyone with an interest in soccer that, yes, what happens in the United States and Canada is worthwhile and legitimate. With that in mind, Major League Soccer did veritable backflips over the news that NYCFC striker David Villa is once again part of Spain’s National Team ahead of their September World Cup qualifiers.

Rightfully so. While the circumstances behind Villa’s return to La Furia Roja are unique, it’s clearly a symbol of the league’s progress that one of the best international sides in the world tapped an MLS player. Spain is currently ranked eleventh in the world. While they are no longer the dominant side Villa helped to three straight tournament wins from 2008-2012, there are few countries that can claim to be on their level over the recent past.

This is something for MLS to celebrate. It’s a step in the direction any emerging league wants to take. Is it even further acceptance of MLS as an important competition in the wide soccer world? Yes, with the caveat that Villa’s status as a Spanish legend makes his path into his national team easier than that of a number of other MLS stars. Villa’s record is the foundation for why NYCFC’s investor-operators spent to get him in the first place. It’s also why he’s getting an international recall at 35 years-old.

Mexico isn’t Spain, but MLS can smile over the call-ups of the LA Galaxy’s Dos Santos brothers as well. El Tri head coach Juan Carlos Osorio’s recent comments about his lack of concern over Mexican internationals playing in Major League Soccer bodes well for a future where more players from south of the border find their way into American and Canadian clubs. With plenty to offer in terms of salary and quality of life, MLS stands to make gains with Mexican stars.

All good news? Well, there are others. Players who made MLS their league of choice to the detriment of their international careers.

Toronto FC’s Sebastian Giovinco may lose out on the MLS MVP award to Villa, but his play over the course of recent months has been nothing short of spectacular. Despite his rampant goal scoring, including a run of world class goals from free kicks, he is not in Italy’s team for this round of UEFA World Cup qualifiers. The last time that Giovinco received a call to the Azzurri was October of 2015, nine months after he signed with Toronto FC. Whatever credit he was getting then, fresh off a run as a squad player for Juventus, apparently ran out.

Italy ranks just behind Spain, for whatever the FIFA Ranking is worth. Giovinco’s agent took his client’s exclusion to the press, pointing to the forward’s 60 goals over the last two-and-a-half seasons. Whatever benefit of the doubt is at work with Spain and Villa isn’t present in Italy head coach Gian Piero Ventura’s thinking. Instead of calling up the in-form Giovinco, he went with what Giovinco’s agent referred to as “players on the bench for Italian teams”.

MLS would surely love to see Giovinco return to the Azzurri fold, for the same reasons Villa’s call-up is a big deal. The flip side of the positive P.R., however, is the always lingering issue of the league’s schedule and decision to play through many international breaks.

MLS will not be stopping play during the September FIFA window, meaning several of the league’s best missing crucial games during the tail end of the 2017 regular season. NYCFC hosts Sporting Kansas City on September 6 and Portland on September 9, both games that Villa could miss. Yangel Herrera of Venezuela and Alex Ring of Finland will also be on international duty, exasperating lineup problems for NYCFC coach Patrick Vieira.

The league crows about the rising number of international players that fills its roster roles. Eighty-nine players are with their national teams in this window, a number that includes 12 from UEFA nations. MLS is creeping toward the “league of choice” designation that Commissioner Don Garber and other leading figures have so publicly coveted since the dawn of the expansion era. If the current trends continue, it’s quite possible that playing in MLS won’t be any hindrance at all to getting called in some of the most storied national teams in the world.

Assuming this continues, the pressure rises on MLS to fix its scheduling problem. The time is coming when having it both ways will be untenable from a competitive standpoint. Playing through international breaks undermines the credibility of the league and the already questionable regular season format. The more players leave for national team duty, the bigger the problem.

Villa’s return to the Spanish national team is a coup for a competition desperate for all the validation it can get. The Dos Santos brothers getting full consideration for Mexico might be even more important. If Giovinco convinces Italy to give him another shot, it will speak volumes about MLS’s rising reputation.

That’s the good. The bad of the schedule, the bad of teams playing important games without starters, and the bad of MVP candidates going missing. That’s the problem.

The message for MLS is clear. Fix the schedule, or be careful what you wish for.