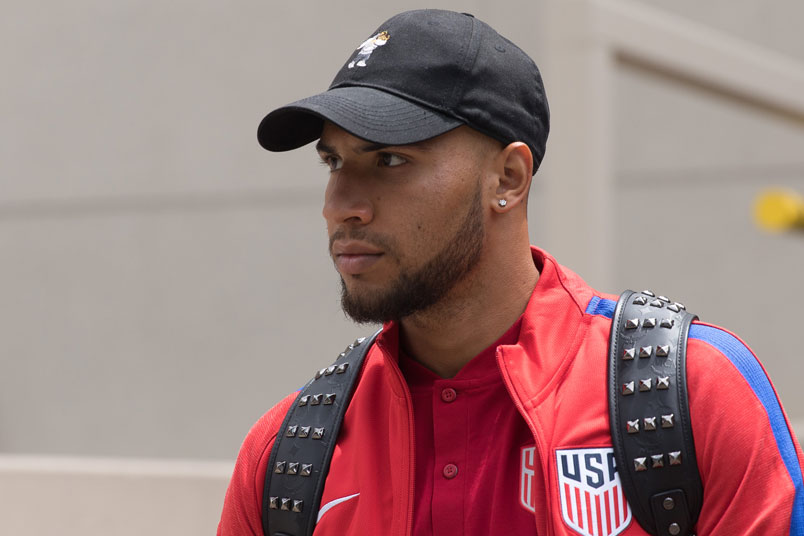 By Charles Boehm – WASHINGTON DC (Aug 18, 2017) US Soccer Players – A familiar sinking feeling returned for many USMNT fans this week. Defender John Brooks is out with injury and will miss the September World Cup qualifiers. The commanding young center back made a major move earlier this year with a transfer – via the largest fee ever paid for an American player – from Hertha BSC to their Bundesliga counterparts Wolfsburg. It was an intriguing new setting at a potentially key juncture in his career.

Unfortunately, Brooks’ debut lasted less than half a match. His injured thigh could keep him out for three months. It’s the latest of several frustrating injury setbacks for a player with enormous potential for club and country.

In a little over a week the US squad will gather again ahead of a tricky one-two of World Cup qualifiers with huge implications in the quest for Russia 2018. First Costa Rica visits Red Bull Arena in Harrison, New Jersey on September 1. Then it’s a quick turnaround to Honduras, specifically the sweltering, unfriendly confines of Estadio Olímpico Metropolitano in San Pedro Sula.

Costa Rica’s quality is well-known. They beat the Yanks at RBA in a 2015 friendly in the aftermath of that summer’s dispiriting Gold Cup campaign. San Pedro Sula might just be the most unpleasant road trip in all of CONCACAF, even compared to visiting Mexico at the mighty Azteca. It certainly humbled the US in the 2014 Hexagonal, a 2-1 loss that might rank as one of the worst outings of the Jurgen Klinsmann era.

The USMNT has done without Brooks before. What makes it worse is that DeAndre Yedlin is already nursing a hamstring problem that has his US availability in question. Omar Gonzalez recently picked up a knock that has limited his action for Pachuca. In the worst-case scenario, it could add up to a horribly-timed injury crisis for the Yanks defense.

If this sounds familiar, it’s because a similar situation unfolded for the June qualifiers. It helped confirm coach Bruce Arena’s unexpected decision to roll out an unfamiliar five-man backline in the 1-1 draw at Mexico.

That gambit worked out well in the end. Arena and his staff will now reach deep into their bag of tricks next month. Little wonder that Arena maintains a comprehensive depth chart with three full teams of players arrayed in order of preference.

He’ll also be eyeing his left back options closely. Jorge Villafana has performed well for the USMNT this year, but is not starting for Santos Laguna at present. Will DaMarcus Beasley, still the program’s Energizer Bunny at age 35, get another call? Will Arena be ready to entrust a relatively unproven choice like Justin Morrow or Eric Lichaj? Tim Ream played at left center back in that Mexico stalemate, but could deputize on the corner of a four-man back line. Fabian Johnson has been nominally dubbed a midfielder by preference under Arena, but might return to fullback duty yet again.

Yedlin seems like the firm #1 at right back when healthy, but “when healthy” is key. So Lichaj, Graham Zusi, and perhaps even Timmy Chandler have reason to watch their phones, and their form.

The center of defense will be particularly pivotal in both of these games. Some journalists have speculated that Gonzalez isn’t one of the coach’s first-choice center backs. Maybe, but he’s now started in five of the USMNT’s six Hexagonal qualifiers to date. The tall Texan also started five of the Yanks’ six Gold Cup matches, striking up a solid partnership with Matt Besler to anchor the US defense in semifinal and final wins.

Besler works at the heart of the best defense in MLS this season with Sporting Kansas City. He’s not the most imposing option in the US pool, but might be in the best form right now. Another key figure will likely be Geoff Cameron, who seems to have found his rhythm again as his club Stoke City wade back into the Premier League grind.

At times earlier in the year it looked like one of the FC Dallas duo of Matt Hedges and Walker Zimmerman could be in position to influence this debate. Injuries and uneven displays may have pushed that off into the future. Matt Miazga might be another dark horse here, depending on what Arena thinks of his performances at Vitesse Arnhem in the Netherlands.

Trust and experience are typically key in Arena’s outlook. Yet it seems quite possible that he’ll have to shift on the fly once again in September. Whatever unfolds over the next week-plus, the decisions awaiting him are tough ones.