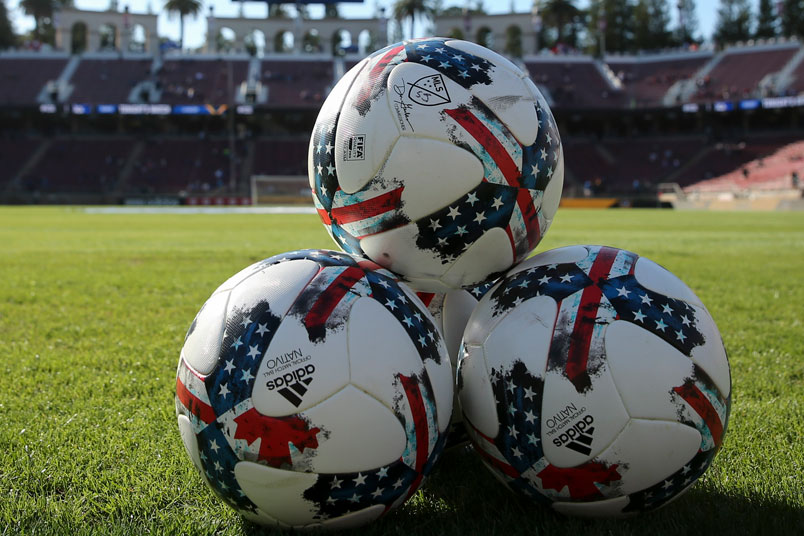 By J Hutcherson (Aug 2, 2017) US Soccer Players – It’s almost cheating to latch onto comments made in an open discussion that anybody with internet access and time on their hands could’ve watched. MLS commissioner Don Garber provided the talking points in a Tuesday fan forum, and one of them is worth serious consideration. More to the point, one of them has been an issue almost as long as MLS has been operating.

Here’s the commissioner responding to what concerns him most. “The enormous pressure that is coming into our country from international clubs and federations and leagues. There isn’t an international team of note that doesn’t have an office in New York and is trying to use our country as an ATM, if you will, and play games and tournaments. That’s OK, competition is good. It make you stronger, makes you more focused. But it’s pressure that the NBA doesn’t have to worry about and certainly not the NHL or baseball certainly, or the National Hockey League.”

Push that up the table past MLS playing with acronyms for how to pay their players, where to put the next round of expansion teams, and how to get to the top of the international heap by 2020. It’s that important, because that’s the direct pressure they face in a different game than the one they’re playing on the field. Underlining that Garber is right shouldn’t be necessary. It’s clear to anybody paying attention.

There’s a belief in American pro sports directly related to a basic tenant of our version of capitalism. It’s what the market will bear. It’s not really true, of course. Baseball’s anti-trust exemption makes it practically impossible that a rival league will play games that count. MLS itself got first division sanctioning in competition with other concepts for a topflight soccer league. It’s rarely what the market will bear. If soccer is the exception, it doesn’t work in favor of Garber’s league.

What we’ve watched happen with the summers of soccer is direct competition for viewers and sponsorship money. Both of those are central to any pro sport’s business model. Take for granted that they’re a major part of the revenue stream, but don’t overlook how ticket prices have edged up for exhibition games that regularly sellout.

If you’re MLS, there’s only one response. Treat this for what it is. Competition in a market that according to the rules as we knew them is yours.

MLS muddies the response. They’ve been more than happy to schedule midseason friendlies against the super clubs of Europe and the biggest clubs in the region from Mexico. The All-Star Game is the obvious example, with the league sending a mixed message there. The various alliances with European super clubs also doesn’t help Major League Soccer’s argument, but then again it doesn’t dismiss it outright. Trying to take whatever advantage you can in a tough market is certainly a business strategy.

Right now, it’s a tough market for American club soccer. For all the gains, the competition is direct and challenging. It’s never been easier to be an American fan of a foreign club, super or not. The expectation that you can drive to see that club isn’t unrealistic. Give it a couple of summers, and there’s a good chance that mid-tier Premier League or Bundesliga club will opt to see America. Preseason training trips European clubs make to Switzerland and Spain normally don’t include playing to packed stadiums that hold more than their home venue. When there is money and exposure, European soccer clubs want in.

That’s not a backhanded compliment for MLS. The touring season predates them by decades. The market has always existed for a European club to visit their American fan base and that fan base has always been here. It’s what it looks like now that’s the issue, predicting a growth model that doesn’t necessarily include MLS.

Asking if it should isn’t a flattering question for Major League Soccer. The proof is already in the attendance numbers and, as Garber pointed out, European clubs focusing intently on the American market. There’s a reason so many European clubs not based in Britain now have English language web presences that are more than just creative efforts with Google translate. There’s a reason the branch offices those clubs setup in the United States now seem more serious than they were with earlier attempts. If it’s what the market will bear, it’s a safe bet that the European clubs will see how much weight they can add.

Bad news for MLS, all things considered. Good news for American fans of those clubs. That those two things are still not in sync is part of the problem. It lumps MLS in with Australia’s A-League, China’s Super League, and the other emerging soccer markets where European teams spend time playing to large crowds in the summer. That’s not the situation a future competitor wants.

That’s the MLS issue right now in bold type. They don’t want to just compete on the field. They want to compete in the business of professional club soccer. That might be a game that they’re already losing at home.