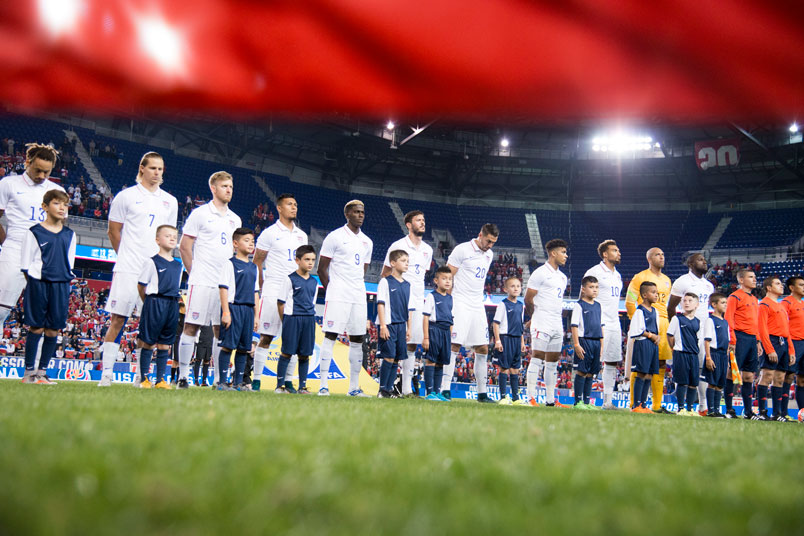 By Clemente Lisi – NEW YORK, NY (Aug 28, 2017) US Soccer Players – The list of cities that have hosted US World Cup qualifiers is a long one. It famously features Columbus, Ohio, site of several epic 2-0 wins versus Mexico. There’s the obvious places like Washington, DC and the less so like Tampa. The list even has Rome. Yes, the one in Italy. That was the site of the USMNT’s first-ever qualifier where the team went on to play at the 1934 World Cup after defeating Mexico.

There may be a reason, however, as to why New York City and its surrounding suburbs have never hosted a US World Cup qualifier. While the Big Apple may feature a melting pot of people who love he game, it is also a place where it’s widely believed the National Team would struggle to get home field advantage.

That’s why it was a surprise to some when US Soccer announced in July that the United States would play Costa Rica on September 1 at Red Bull Arena in Harrison, NJ. While the match will be the first qualifier ever in the New York metropolitan area, the US has a long history of playing games in New York and New Jersey dating back to 1925. The team has played three times at Red Bull Arena, all of them friendlies. The most recent was also against Costa Rica in 2015, a game that ended in a 1-0 loss for the USMNT.

“This is going to be a critical game for us against one of the toughest opponents in CONCACAF,” head coach Bruce Arena said in a statement provided by US Soccer when announcing the game. “Red Bull Arena is among the finest soccer facilities in the country, and we look forward to having outstanding support.”

All indications point to a pro-US crowd for the upcoming high-stakes Hexagonal game. While the soccer-specific stadium has a capacity of just 25,000, a key contributor in making this game feel like a home match is for American fans to come out in force.

That’s exactly what’s going to happen. Both New York City and parts of Northern New Jersey don’t have particularly large Costa Rican populations. In addition, US Soccer members and Red Bull season-ticket holders had access to tickets first, prior to the general availability. That general sale was the first shot – and in many cases only time – Costa Rican fans have at buying tickets. MLS venues, it turns out, haven’t just helped the league grow, they have also become a place for the National Team to call home.

“We’re confident US fans will be pack Red Bull Arena and provide a fantastic atmosphere in support of the team,” said US Soccer spokesman Neil Buethe.

American Outlaws chapters in the area got a portion of those 4,000 tickets set aside for die-hard supporter groups, have been prepping for the big game all summer. Andy Bajana, who heads the Bronx chapter, said Red Bull Arena is the perfect site for such a high-profile match.

“Take a look at NYCFC and New York Red Bull. There are thousands of supporters from each team, and keep in mind NYCFC is only three years old,” he said. “This city, and this region of the world, loves soccer. There is no doubt in my mind that we will be louder than the Costa Ricans and leaving the stadium with three points.”

Gareth Clancy, who heads the Queens chapter, said it’s hard to tell how many US fans will be at the match. He vowed, however, that the American Outlaws section, typically located behind the goal, will be loud and proud. “As far as noise,” he said, “we’ll be heard loud and clear. Drums, chants, etcetera. I think it’s safe to say Labor Day weekend … the noise will be electric.”

Arena, who hails from Brooklyn and briefly coached the Red Bulls a decade ago, has not been shy about saying that the US should play in soccer-specific stadiums home to MLS teams, over other potential sites. It highlights how far the game, and soccer fandom in general, has come in this country when the National Team choses venues over geography. It also rewards MLS fans, in this case Red Bull supporters, who routinely come out to cheer on their local team with a National Team match.

“When we entered 2017, it was critical that we were able to select venues that would help the US team. We knew our last home game was going to be critical and perhaps the deciding factor in qualifying for the 2018 World Cup in Russia,” Arena told reporters in May when US Soccer announced that its October 6 qualifier versus Panama would be at Orlando City Stadium. “There could not be a better venue, a better city to select, than Orlando. We know when we come here in October, there are going to be 25,000 people here supporting the US team and giving us every chance to be victorious on the day and headed to Russia in ‘18.”

Arena said MLS stadiums, like the one in Orlando City, are a better option than large NFL venues. In this case, Red Bull Arena is better than playing the game at nearby MetLife Stadium which seats 82,500.

“The bigger the venue becomes, the less favorable it is for the US team although the stadiums would likely be filled,” he added. “When we’re in the smaller stadiums, the likelihood of it being largely a dominant crowd in favor of the US team occurs.”